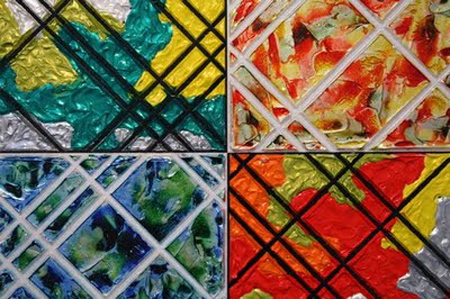 Two impending southern California exhibitions remind me this week how integral the idea of desecration is to the history of the visual arts. The shows are by Albert Contreras (Peter Mendenhall Gallery, September 21-November 2) and Lester Monzon (Mark Moore Gallery, September 14-October 12). There are notable similarities between many of Contreras’ recent paintings, such as "Untitled-24" (http://petermendenhallgallery.com/engine/details.php?image_id=1465), and Monzon’s new painting, "Untitled #8" (http://www.markmooregallery.com/exhibitions/2013-09-14_lester-monzon/). Both are boldly colored geometric compositions featuring myriad rhombuses lined up in grids.  Contreras’ painting updates DeStijl for the new-millennial set, rendering shapes in creamy, glitter-spangled acrylic gels and a palette of bubblegum and jewel tones. Monzon’s gridded diamonds are unceremoniously slathered with a messy gesture of orange paint, as if holding up modernist ideals to a barrage of postmodern tomatoes.

In a sense, both painters are desecrating the transcendentalist aims espoused by 20th Century artists such as Kandinsky, Mondrian, Rothko, and Newman, but in diametrically opposed ways: Contreras by tarting up modernist geometry into unbridled parodic decoration; Monzon by dressing it down into seediness. While Contreras romantically maintains in interviews that his art-making is an act of sheer exuberance and defiance of death, Monzon’s works are more conceptually presented as “meditations on artistic taxonomy” facilitated by “a satirical hand.” Both artists, by perverting geometric idealism, implicitly subscribe to one of contemporary art’s ruling premises: that artists advance the march toward aesthetic evolution only by subverting the status quo. If artists fail to (to use the turbo-charged parlance of press releases and artist statements) pulverize paradigms and pull rugs out from under some presumably monolithic establishment, then their work’s value is suspect.

The history of art is in large measure the history of subversion, as even the most cursory art-tour time travel will attest. Contrapposto’s perfection in the fifth century B.C. was a reaction against the ramrod stances of the kouros and kore that came before. The distortions of the Mannerists upended the naturalism of earlier Renaissance painters, while the chiffon-light airiness of the Rococo sprang up as an antidote to the ornate heaviness of the Baroque. There would have been no Salon des Refusés in 1863 had there been no Salon de Paris to do the refusing, nor would Marcel Duchamp’s "L.H.O.O.Q." been anything except an empty mustache and goatee without a Gioconda to desecrate. Then there was the extraordinary iconoclasm of the Cubists; Mondrian’s righteous dismissal of the entirety of representation; the spectacle of Andy Warhol literally soiling the idea of painting itself in his "Oxidation" series; and the rise of postmodern pastiche as a retort to the notion of style itself.  In the art world today — which is to say, in those rarefied spheres bounded by Artforum, Larry Gagosian, and certain ratified MFA programs — artists exist to the degree that they subvert.

It is thoroughly uncommon to encounter an artist who defines him- or herself in terms of the tradition s/he is upholding, as opposed to the one s/he is endeavoring to undermine. I met one such artist last month. He’s a photographer named Michael Alago, and I was introduced to him at the opening of his show, "Rough Gods," at Cock Gallery here in Portland. He takes beefcake portraits of bodybuilders who pose and preen for his lens, often in the nude. I asked Alago how his work related to that of Herb Ritts and Tom Bianchi, fully expecting he would pay lip service to those photographers, then promptly and gaseously explicate the crucial step forward that his own work took to distinguish it from the flawed, or at the very least passé, approaches of his predecessors. Alago looked at me for a moment, and I realized I hadn’t been very clear. I restated the question:  “Where does your work stand in relation to the tradition of beefcake photography?” Imagine my surprise at his immediate reply: “Oh!  I’m continuing it!” How radical, I thought, how disarming. Here was an artist with no apparent pretensions of pulverizing anybody’s paradigms or critiquing entrenched historical tropes.

As far as I could tell — and Alago's work, along with his response, bore this out — he had found an existing idiom in which he felt at home and enjoyed mining its aesthetic vein. I felt as if I’d been splashed with Aqua Velva. Certainly, thankfully, there will never be a shortage of artists who attempt, generally with limited success, to fuel the act of creation with the impulse toward desecration or outright destruction. But it is also refreshing to know there are artists who respect historical precedent and create work that honors, rather than categorically rebels against, their aesthetic lineage.