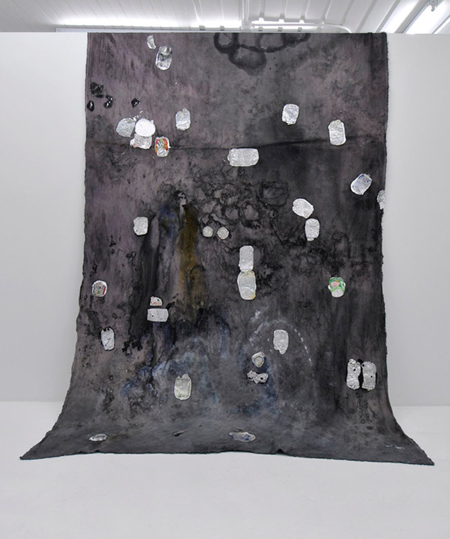 Last month here in Portland I saw a mixed-media show that left me pondering the distinctions between “good bad” art and “bad bad” art.  The exhibition, entitled "Sleeper," was artist Kristan Kennedy’s solo debut at Fourteen30 Contemporary. The work struck me as willfully bad — which is to say, it flouted the very qualities by which artworks in the pre-Modernist era were judged to be “good”:  refinement of technique, craftsmanship in execution, a sui generis recognizability to the artist’s hand, and an aspiration toward beauty and the sublime. Creating artwork, especially object-based work that will be validated by popular tastes, has not numbered among the intents of most serious artists for some time, and that’s a good thing. In the case of Kennedy’s "Sleeper," no one would accuse the artist of having done a good — or bad — job of making good work. The only question to parse is whether she’d done a good job of making bad work or a bad job of making bad work. This is what art appreciation has come to in our post-postmodern present: an exercise in qualitative semantics.

More context about the show:  Its centerpiece was a 15’ x 6.5’ bolt of distressed linen, festooned with crushed aluminum cans and chunks of gesso that looked like metastasized wads of chewing gum. It was unceremoniously draped (“draped” is too lyrical a verb; “schlepped” better captures the spirit) over a partition in the gallery’s center, as if to simultaneously reference and desecrate the tradition of the Renaissance tapestry. On the walls hung two photographs taken inside a derelict building whose tiles had crumbled away, exposing the trowel-and-mortar work underneath. On first glance from middle distance, viewers might assume the photographs were paintings and mistaken the masonry’s sumptuous impasto for Kennedy’s own brushstrokes. Closer inspection reveals that they are actually an “F.U.” to the notion of the artist’s hand itself. Without exception, the works’ titles were inscrutable acronyms. One was called T.H.Y.I.T.F., another P.T.B.A.T.P.  The title of the draped linen piece consisted of no less than 28 letters all lined up, full of sound and fury, signifying — what, exactly?

Part of a critic’s job is to help readers understand an exhibition’s precepts. This is more challenging when an artist is deliberately evasive and has a conceptual framework not widely known to the art-going public. Until "Sleeper," for example, Kennedy had not had a solo show in Portland since 2005. Artists' statements are often helpful tools for viewers looking for a foothold, but Kennedy didn’t write one, leaving the heavy lifting of explication to the gallery’s press release. That release volunteered that the artist was interested in discovering “an arrival at meaning by giving up control of meaning” and “upending the ‘self’ by placing something within the paintings and then allowing for information to get stuck to it ... and information to be eradicated and destroyed.”

One can imagine viewers scratching their heads, brimming with certitude that their proverbial six-year-old could have done better. It is the type of scenario that supplies ammunition to those who impugn contemporary art as inaccessible to the hoi polloi — the attitude concretized in "60 Minutes" correspondent Morley Safer’s classic 1993 report poking exasperated fun at the likes of Jeff Koons and Christopher Wool. Safer, however, glossed over the recent history of self-consciously “bad” art: the transgressions of the avant-garde and the conceptualists, the Bad Painting movement, the fervid slop-fest of Neo-Expressionism.

Today, the bad-as-good aesthetic has reached the point that painter Elizabeth Peyton’s slack celebutante portraits must be second- and thrice-guessed, lest amateur-chic be confused with lack of skill. “We wonder,” mused Kim Levin in May’s ARTnews, “whether Peyton’s absence of irony represents a new tendency toward anti-cynicism, or whether naturalism is a new post-post-conceptual stance.” To unravel such puzzles is to untwist a pretzel that was baked in a mystery inside an enigma. Good bad art? Bad bad art? We can mull it over while we whistle the old Duke Ellington tune, “I Got It Bad (And That Ain’t Good).”