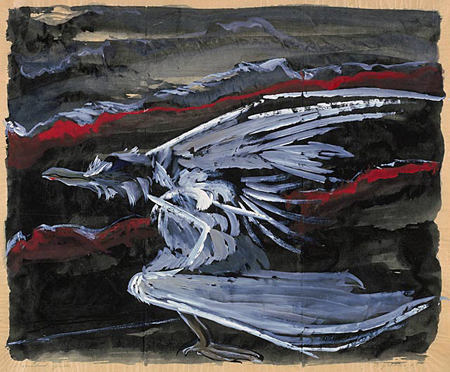 Although Mark Tobey is generally regarded as the most important artist to emerge from the Pacific Northwest, Morris Graves (1910-2001) definitely became during his lifetime more well known, always bordering on legendary status due to his eccentricities, mishaps and charismatic, nomadic personality. With Vicki Halper and Lawrence Fong’s “Morris Graves: Selected Letters,” Graves pushes ahead of Tobey again (he was a success in New York before Tobey). Thanks to their conscientious efforts, Graves comes alive through letters and is also seen in those written to him. This amplifies the readability of the book, which is as close to a full-scale biography as we may ever get.

Since the book is organized by subjects (“Family,” “Intimacy,” “Nesting,” “Meaning,” etc.), there is some repetitive cross-referencing but, as one of the indexed subjects, Eric Nelsen put it, “'Selected Letters' is still “a page turner.” Halper and Fong clarify many of the anecdotes and legends, few of which bear repeating here, and many of which take on a stale odor 12 years after Graves’ death. (I am also the addressee of a letter, never mailed, but more of that later.)

The Oregon-born artist came from a huge family. He created surrogate families and substitute siblings throughout his life. As the letters demonstrate, communication with friends and families took on added importance the more Graves traveled — or chose to avoid them. Close-knit coteries revolved around him on the East as well as West Coasts and included famous and not-so-famous figures. As he wrote his mother, Graves determined from an early age to be an artist. The upper-class social standing of Graves’ family (his father was a real-estate developer who committed suicide during the Depression) paved the way to rich and aristocratic patronage in the Northwest, Europe and New York.

Little birds and, later, little bouquets of flowers became his stock in trade. Wealthy women from Blanchette Rockefeller and Emma Stimson, to novelist Nancy Wilson Ross and photographer Dorothy Norman doted on him. His New York debut coincided with Magic Realism and Surrealism and greatly aided in his success. The early letters demonstrate my adage, “Why does an artist complain about his dealer? Because he has one!”

Instead of expensive Soho loft conversions, Graves built or remodeled lavish houses near Seattle, Dublin, Ireland, and finally Eureka, California, where he lived from 1964 until his death. Pouring money in and borrowing more from rich collectors (whom he repaid with paintings), he complained constantly about his undertakings and, in each case except California, moved in and moved out, frustrated over and over before fleeing to Japan, India or France.

What do we learn that is new about Graves? That he usually treated his lovers like doormats before casting them out for disloyalty. That the actor Charles Laughton owned 60 paintings and sold most of them in 1966. That Graves promoted the idea of selling cheap Graves reproductions “to help fill suburbia’s growing interest” in his work (he only made one print.). That he championed LSD despite his mother explicitly warning him against it. As he wrote to his youngest brother, “I recommend it without reservation for anyone — and everyone,” after his first acid trip in 1967.

Considering he met and transfixed other artists and celebrities, from Marsden Hartley (who wrote poetry to him) to Andy Warhol, Graves’ relationships to New York and California now appear to matter more in the long run than early ties to Seattle. When in New York in 1940s through the 1960s, he socialized with Truman Capote, Mark Rothko, Richard Lippold, Louise Nevelson, theologian Paul Tillich and mythographer Joseph Campbell. In California, leading curators such as Frederick Wight and Peter Selz beat a path to his door. The Duke and Duchess of Windsor were enchanted by him and concocted a $20,000 prize, partly to rebuild their tarnished image after pro-Nazi shenanigans during World War II.

Paradoxical, contradictory, charming and cruel, Graves intoxicated people with his physical stature (6’4”) and seductive voice. The finer details of his personality are unfortunately on display in the letters. Noting just two areas of revelation — homosexuality and Jews — the artist’s selfish exploitation of others who loved him is equaled only by seven specifically anti-Semitic references over a 40-year period too vicious and painful to reprint here.

As to homosexuality, Halper and Fong get the date wrong on my controversial article outing Graves, Tobey, Guy Anderson and Leo Kenney. It appeared in New York’s “Art Criticism,” in 1986, not 1988, which is when it was reprinted in Seattle. Graves’ letter to me denies the male or female symbolism in the painting, preferring the tame “androgynous.” For some reason, he was persuaded never to mail it. Nearly 30 years later, the outrage directed toward me at the time by his friends is more understandable. He frequently used his friends as surrogate hatchet men and women. The other letters expose many sides of his sexuality — masturbation, erections, flings and tricks — far more than any I touched on in my essay, “Prometheus Ascending.”

“Selected Letters” belies the smooth, elegant and quietist qualities of the paintings. Graves now appears more human, more fleshed-out, less spiritual or etiolated. It also exposes his mean-spirited, petty, egotistical side, really not that different from a lot of other successful artists.