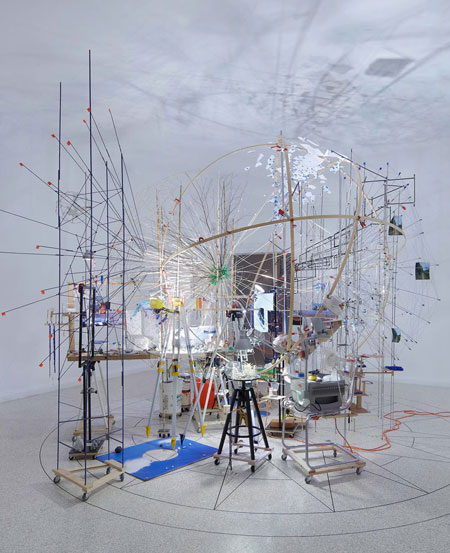 By the time you read this, I’ll be on my way to Venice, Italy. I travel there every two years with some School of the Art Institute of Chicago students and two great colleagues, Helen Maria Nugent and Anders Nereim. We do a lot of things on the trip, concentrating first on Renaissance and Baroque art in Rome, then modern and contemporary design in Milan, and then, of course, the Venice Biennale. For students obsessed with contemporary art it’s that final component that’s the real eye-opener. Because the Venice Biennale, currently up through November 24, is today’s most important international art event of its kind, this truly global initiative draws art and artists, critics, collectors, curators, dealers and about 500,000 visitors from every corner of the planet.

Why? Well, a bit like Goldilock’s porridge, the VB today just seems right, not too hot, not too cold. There are subtle explanations for why the VB has become so anticipated, so visited and so autopsied. First off, if anything separates contemporary art today from the late modern art that preceded it, that transition that took place during the 1980s when the art world went global. While New York's Whitney Biennial could justifiably claim to be the arbiter of contemporaneity in the 1960s and 1970s, it’s restricted to American artists, and no one today would argue that you can meaningfully survey contemporary art solely by including artists who have zip codes. While the Whitney Biennial is curated by a few art professionals, the VB has long been administrated independently by each of its well over 100 participating nations and organizations (the American Pavilion, showing Sarah Sze, is under the auspices of the U.S. State Department) and while it does have an important curated component — this year by Massimiliano Gioni — the national pavilions at the Giardini and the Arsenale and at the dozens more scattered all over this very scattered city give it a strange and compelling quality of national pride, boosterism, local ownership, and artists as citizens.

Biennials seem paced about right for art world buzz. Once every two years means there can be anticipatory chatter about who’s in, who’s out, how things are progressing, local interest as each nation names its participating artist, and then the run up to the grand opening, which is today the mandatory place to see and be seen by the art world glitterati. Three years (triennials) are a bit too slow, annuals too fast, and longer gestations, such as the five years between Documentas or ten years between Skulptur Munsters seem almost geologically slow.

And it’s in Venice, already one of the most opulent and visual places on earth. Venice is a site where light zips and bounces around as it does nowhere else, an absurd city, a unique city, a time warped city, a ridiculous place even to those — like me! — who love it. If your sense of sight isn’t already in high gear there you might as well skip the Biennale. Venice, too, is a good metaphor for its Biennale, as the latter is a kind of art world carnevale, with a forced gaiety and elaborate rituals only partially masking subtexts of ambition and power, even desperation. There’s the razzle-dazzle of the Giardini and the working class rawness of the Arsenale. But there’s also the trek through seemingly abandoned neighborhoods in parts of the Giudecca or Dorsoduro, locales that no tourist ever sees because you’re determined to visit, let’s say, the Azerbaijani off-site installation, criss-crossing warrens of vacant calles and still canals, going from deep shadows to blisteringly bright sunlight, only to find it closed and abandoned. I can’t wait!

Attending the Venice Biennale — or perhaps a major art fair — is the absolute best way to get thrown into the deep end of the pool of contemporary art and flounder about, enjoying the exercise, immersed in an altered environment that’s both familiar and strange. But it’s not a pool, it’s a sumptuous visual feast, and if you’re not interested in the Estonia off-site exhibition, there’s almost always a great church two canals away with a terrific Bellini altarpiece. Ciao ragazzi!