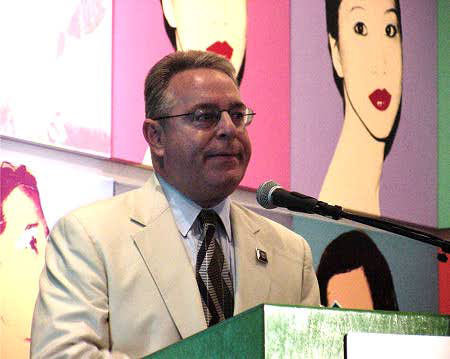 One of the most unique yet crucial characters to contribute to the emergence of Los Angeles as a major presence in the art world was not an artist. He departed nearly 15 years ago after having spent 30 stable years as a City Councilman in that most capricious of professions, politics. As a Republican party affiliate throughout that phase of his career, he nonetheless built a reputation as an art advocate the he backed up with a string of legislative achievements that today's party would regard as grounds for excommunication. He came out of the closet during his third and final run for Mayor in 2001, not shocking news by that time, but unhelpful to his efforts to attract the more conservative voters populating the San Fernando Valley (he drew 11% of the vote that year in a fourth place finish). Indeed, since leaving office Andy Warhol Foundation President Joel Wachs eventually did switch parties, but strictly out of personal conviction rather than political ambition.

Wachs nonetheless retains his reputation as the fiscal conservative who graduated Harvard Law School to, early in his career, work as a tax attorney. His reputation at the helm of the Warhol Foundation has been sterling in part because this is a brand of conservatism that has enhanced the Foundation's reputation for careful generosity. Stewardship of a foundation "created to support the visual arts," as vaguely specified in the artist's will, turns out to have been a second act seemingly made for this guy.

While in Los Angeles Wachs was probably best known to the public as city government's most visible skeptic of the use of tax dollars to finance privately held civic projects. He memorably opposed, unsuccessfully of course, public financing of the Staples Center development. Wachs was an early adopter and active supporter of neighborhood councils within his District 2 (in 1996 he helped mandate them citywide); lead passage of one of the then strongest bans on job and housing discrimination against gays in the county; and was known as a strong advocate for rent control. Thus, while popular within his district, he was more grudgingly respected than beloved in most other parts of Los Angeles. The peculiar citywide exception was his popularity in the art world, where he succeeded in combining personal passion with political initiative.

During the 1970s Wachs earned a reputation as what was then Los Angles' Municipal Arts Department (now the Department of Cultural Affairs [DCA]) most reliable advocate. This coincided with his regular activities as a serious art fan and collector; though he had to limit his acquisitions budget to about $10,000 per year, during the 1980s he earned a regular position among ArtNews Magazine's "Top 200 Collectors" roster of mostly mega-millionaires. More significantly Wachs provided key political support for key initiatives that helped position Los Angeles' cultural expansion for the long haul. He oversaw the crafting and passage of the Artist in Residence ordinance (1982). He wrote the city's 1% ordinance requiring real estate projects in excess of $500,000 to set aside that portion for cultural expenditure (1991) three years after the formation of the Los Angeles Endowment for the Arts trust fund with the DCA.

Both pieces of legislation have remained relevant forces within the art community since their enactment. Wachs once remarked to me that after a law is passed in response to a particular need to recognize that it would never be perfect, nor would the conditions that make it successful remain the same. Sooner or later a new law or amendment would supersede that of the present, so don't be too precious. Spoken like an artist Mr. Wachs, but like museum quality art his best work has already stood the test of time.