Brutal Treatment of a Brutalist Building
Column by James Yood 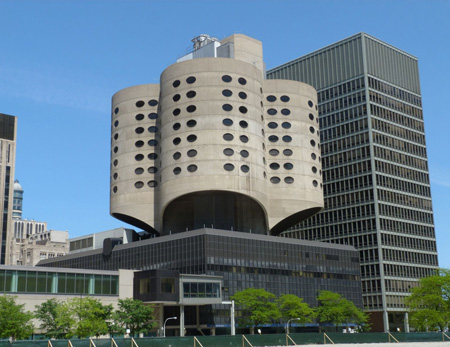 It could be called the 30/40 rule: We hold in contempt what our culture produced 30 or 40 years ago. It’s then no longer even faintly contemporary; it looks dated and shabby, it’s past the temporary resurrective allure of being retro but not gone long enough to be nostalgia; it just looks wrong and dead and stale. For us, of course, that means it’s more or less the 1970s that now seem a visual embarrassment, that chilling and contentious decade not just of Watergate, student revolt, and the tortuous conclusion of the Vietnam War, but of post-minimalism, earthworks, hyper-realist and conceptual art that now looks tired and irrelevant.

Of course, it’s easy enough for the public to ignore art it doesn’t like. That’s much tougher to do, though, with architecture.  So, in instance after instance across the country it’s the brutalist architecture of the 1970s that’s come under assault: it is those concrete or bunker-like structures — the best of them would be the Whitney Museum in New York or the Hirshhorn Museum in Washington — that now seem heavy and, well, brutal, without the glistening techno allure of the modernist glass cube that preceded it or the clever fun, fun, fun of the postmodernism to follow in the 1980s.

In my city, Chicago, the wrecking ball is literally looming above a brutalist masterpiece, Bertrand Goldberg’s Prentice Women’s Hospital of 1975. There’s no need to recount the predictably tortuous narrative surrounding the arrival at this moment over the last four or five years. Northwestern University owns it, they don’t want it, they want to tear it down and build a research facility. There’s always more money in demolition and constructing new structures than in rehabbing or adapting existing buildings. The city wants the money and jobs, architectural preservationists in Chicago are largely ineffective and the public just doesn’t warm up to a building they think looks fascistic or strange or just plain ugly. While all this was playing out in various courts of law and public opinion, the Art Institute of Chicago held an exhibition trumpeting Bertrand Goldberg’s work (the late architect also built the curvy and iconic Marina City in Chicago), and extolling Prentice. But to no avail, the hospital undoubtedly will be gone before the end of this year.

Why? Why in a city that rightfully holds its architecture as one of its greatest treasures, the home of Mies van der Rohe, Louis Sullivan, Frank Lloyd Wright and so many more — though works in Chicago by all three, as well as Walter Gropius and others, have been demolished in the past few decades — is this happening? Many reasons, but I’ll cling to the 30/40 rule, that the defensive aura of much 1970s architecture, its almost castle-like impassive refusal to be overtly user-friendly and embrace the public now offends us.

Those architectural strategies perfectly embody their historic moment, reflecting a culture under siege, bored with the intellectual purity of modernism and intrigued with the stern weight and heft of concrete. Brutalism looks as bad to many today as Art Deco buildings looked to audiences of the 1960s and 70s (the 30/40 rule again), the same Miami Beach Deco hotels, for instance, that you now have to queue up to for reservations. These the rare survivors of the many that were torn down back then, as Art Deco looked old fashioned and silly, polychromed and fussy. And you can just about see the next wave of the 30/40 rule coming. Once seen as witty and irreverent, 1980’s early postmodernism is beginning to seem tawdry, facile, even tacky. But at the time it was the antidote to what was seen as the dullness of brutalism and modernism. Just coming up to thirty years on, it's now being interpreted as mannerist and self-indulgent.

The role of Northwestern University (I taught at Northwestern for 15 years and have many great memories of it) shouldn’t be passed over. For a major American university that prides itself on its cultural activities, that even today at its Block Museum is hosting the exhibition “Drawing the Future: Chicago Architecture on the International Stage, 1900-1925,” to simultaneously be the major player in this act of cultural desecration is almost beyond belief. Universities rightfully do a lot of things, but destroying major buildings by great architects should never be one of them.