Capitalism and its Discontents
Column by DeWitt Cheng 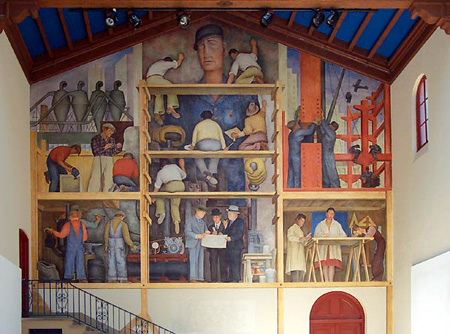 Diego Rivera, ''The Making of a Fresco: Showing the Building of a City,'' 1931, fresco mural at the San Francisco Art Institute.

In 1897 Paul Gauguin entitled a major painting, “Where Do We Come From? What Are We? Where Are We Going?” — raising in a visual context the grand old metaphysical/philosophical questions. Such concerns would lie untouched by the art world for a long time after the demise of Abstract Expressionism, but they have come home to roost recently, with many in the art world hankering for a bit more of the old adversarial stance to mainstream culture, and a bit less fashion/entertainment spectacle. Regular readers of this space may remember that the veteran art critic Irving Sandler, responding to this midlife crisis, asked, in a BrooklynRail.org piece, other Dichter und Denker, poets and thinkers, to weigh in. Last month I presumptuously opined in this space on Q1: What should art criticism be doing? Today, Q2: What are the issues or polemics, if any, for art criticism?

As I interpret Sandler, polemicism in art is the issue. The social message art of the 1930s and early 1940s, pro-labor and antifascist, and sometimes even socialist or communist, remains visible chiefly in WPA murals in public buildings made under the auspices of the New Deal. Here in liberal San Francisco, we’re fortunate to have works by Anton Refregier, Diego Rivera and others still on view. But the artiste engage gave way after the war, with the advent of the American imperium and the Cold War, to a different vision of struggle: individual and existential, rather than collective and political. The story of how these political artists were sidelined by the political right (which considered them pinkos) and the cultural left (which considered them retardataire makers of  “poor art for poor people,” to quote Arshile Gorky) is well told in Bram Dijkstra’s enthralling book, "American Expressionism: Art and Social Change 1920-1950." (Goya’s savage indignation at human cruelty, Daumier’s sallies at bourgeois mediocrity and royal stupidity, Grosz’s satirical Tendenzkunst, Picasso’s "Guernica" are, of course, exempt from such dismissal, and rightly so — which simply proves that in art, as in other modes of culture, fashion reigns supreme.)

With the advent of postmodernism in the late 1960s sociopolitical content returned, replacing the exhausted dogmas of formalism and abstraction along with the disinterested connoisseurs who made aesthetic judgments from a lofty spiritual plane. With a fresh impulse towards relevance, art once again directly and even bluntly addressed war, racism, gender bias, homophobia, environmental collapse, economic exploitation, imperialism and colonialism. American capitalism had long enshrined ruthless go-getting as a model for living, even extolling artists during the Cold War as rugged-individualist entrepreneur-creators—e.g., Ayn Rand’s visionary, Howard Roark, and Henry Luce’s cowboy-hero, Jackson Pollock. The return of reality to contemporary art was overdue.

But the inclusion of sociopolitical content in art was accompanied by a rapid proliferation in the means and methods of art. Gone by the 1970s was not only the figuration of the Depression years, admittedly touched by expressionism, cubism and surrealism, but also the idea of a high art that could speak a universal language — the Kantian ideal that Clement Greenberg maneuvered so adroitly into his eloquent arguments for the most austere abstraction. The art world became increasingly subdivided and balkanized, with each ideological city-state defending itself with ferocious partisanship. Painting is dead! Photography is not art! Video is boring! Performance is self-indulgent! The aesthetic war of all against all, a generation later, has cooled into an uneasy stalemate, with everything considered valid (following the institutional theory, which basically opens all critical floodgates) — and consequently, nothing accorded primary respect.

Art has succeeded in the marketplace, but at the price of its, well, soul? Certainly today’s political art lacks the singular resonance of a “Guernica,” or for that matter the conviction of the Ben Shahn "Sacco and Vanzetti" posters that adorned dorm rooms, ubiquitously, in my salad years. Painting’s authority and prestige have dissipated; new media appeal to a different culture — one more casual and less critical than the one that I remember (or imagine), nostalgically, B.T., Before Tweeting. Ai Weiwei now fulfills the Bad Boy role in The People’s Republic of China that the naughty Gustave Courbet did in France’s Third Republic. However, his ironic mugging in MTV-style videos strikes a false note: is a faux Mick Jagger (who pretended to be revolutionary in 1968) the best that progressive (and revolutionary, after our fashion) international artsters can expect? Did consumerism win the Cold War, and will it likewise outlast the Clash of Civilizations? What Would Gustave do?