Where Art and Money are Well Met
Column by Bill Lasarow 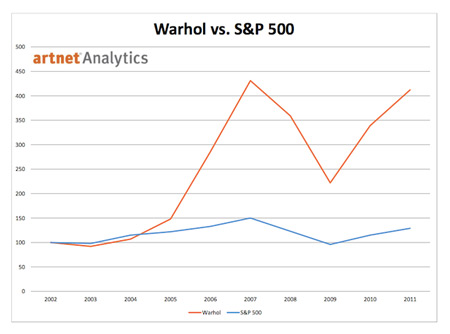 Artnet Analytics graph of Andy Warhol's market performance versus that of the Standard & Poors 500.

Reading Richard Speer's excellent piece last week, it was tempting to conclude that the corrupting influence of money has created an elite class of cynical showmen who are pushing art to historical depths not seen since anonymous monks produced glorified stick figures in the centuries leading up to Giotto. Are you familiar with those neat ArtNet analytical reports that feature an artist's market performance over time in relation to the Standard and Poors 500? If you've got real talent, an ounce of creative integrity and depth of intellect … better take a vow of poverty.

To be sure, there is a market out there that plays by a set of rules that both frees creative intelligence and also can distort it into a crabby dwarf of its best potential. It is always sad to me when I observe how a once fiery rebel voice of great originality settles into an early dotage of pleasure mongering because they are unable to resist being cowed by the seduction of their own popularity.

But I'm thinking today about the role the artist's representative plays. A savvy dealer is extremely conscious of the collections in which they place their artists' work. Just being in a position to do this normally requires years of experience. Getting work placed into the hands of well connected and esteemed collectors, or with a museum whose seasoned curators are eager to compose exhibition catalogue essays comparing said work favorably to historical peers and antecedents, is the very definition of moving things in the right direction. Placed in the hands of a buyer who simply wants to hang it over the couch, or in the midst of the aesthetically wrong kind of artistic company, the work sinks out of sight. There is a difference between money foolishly spent and money well invested in art, and it is not limited to that graph.

The lucidity of this basic formula is self-evident. To the degree a given artist's body of work justifies this placement - by virtue of genuine creative force and vision - the process situates that artist onto an increasingly bigger playing field over time. Like our best athletes and performing artists, it is fair to expect that as an artist's career is driven upwards, they become seasoned at producing work that meets higher expectations. This is often coupled with noticeable increases in both scale and technical complexity. After all, with market success an artist can afford to spend on the assistants, materials and research often necessary to enable them to realize projects that earlier in their careers they could only have dreamt of. The examples among established blue chip artists are so numerous that to cite individual examples is beside the point. And the historical foundation for why it is so dates back at least as far as the late medieval workshops that nurtured the youthful talent and ambition of the Leonardos and Michelangelos of that era.

So I would say that it's hardly a new thing, let alone indicative of a broad decline, that art buyers look for the safety net of financial value ahead of or in addition to aesthetic engagement. That there is a large swath of very bright professionals who make a better living than most artists by connecting the meaning of artnet's Warhol graph to the value and desirability of a particular example of his (or a related artist's) work that happens to be available cannot be surprising.