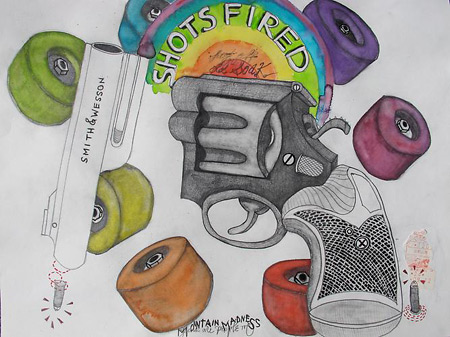 I've always delighted in the small dilemmas that we face at the turning of the calendar. If you begin a painting on New Year's Eve and complete it on New Year's Day should it be dated the old year, the new one, or the seemingly more labor intensive 2012/13? Such details can be revealing of an artist's psyche, not to mention become the source of amusing backstories.

Reviewing the dying year is frequently regarded as time to put together that top ten list that some of our more attentive journalists have been prepping for starting right after the previous New Year. I must be memory deficient, I can't for the life of me recall that one standout show from last March that I need to remind you about now so that perhaps it might serve to frame your own memory of the year. Let's see, there was the Gauguin show in Seattle; the pairing of Bruce Conner and George Herms in San Francisco; Richard Diebenkorn in Orange County (and, yup, those were just in March!). Do we still characterize years and decades with that one trend setting artistic breakthrough?  Hey, there was the School of Paris back in the 1920s, and Pollock and his AbEx buddies in the 1950s. The Neo-Expressionists and all those broken plates go with the 1980s, and when I think of the past decade I keep having visions of $100 million skulls. It's plain ridiculous.

It's sort of a downer to think that the image of the pinnacle of the art world was once Picasso's intense, penetrating gaze and cubist innovations, while this year it was that of some Russian oil zillionaire's private jet taxing in for a weekend at Art Basel Miami. Doesn't mean that my New Year's resolution for 2013 is to wish that the art market scales back, but I don't mind admitting that I've kept up my resolve for around 30 years now to do my damnedest to ignore such conspicuous consumption. You mean that money shapes the art world?  I'm shocked, shocked!

It is sobering for me, personally, to reflect on the artist that I most recently wrote about, Christina Hale. Most of the show consisted of guns. Well, drawings of them, and all dolled up in rainbows precisely in order to expose the creepiness at their core, just spewing from their phallic little barrels. So what happens three weeks after writing about this work? The Sandy Hook shootings. The quasi-charming images of Hale's guns immediately got supplanted with mental images of the devastated bodies of six year olds who could have been my own kid, six year olds who will not get a whiff of 2013, and now I can't look at all those guns they show and talk about on TV without hating the things. Gun control legislation? Ban them all! I'm guessing you share some of that feeling with me. Ms. Hale, bless you for rushing in where wise men fear to tread!

So I've sucked it up and am ready to plunge ahead in time, if with the burden of guilt that, like the rest of us grown-ups, it should have been me, not those first graders. However, let me suggest that we all suck it up and make good, no great things happen as we move forward. We'll do it for those kids. Forward indeed.