Critiquing Ourselves
Column by DeWitt Cheng 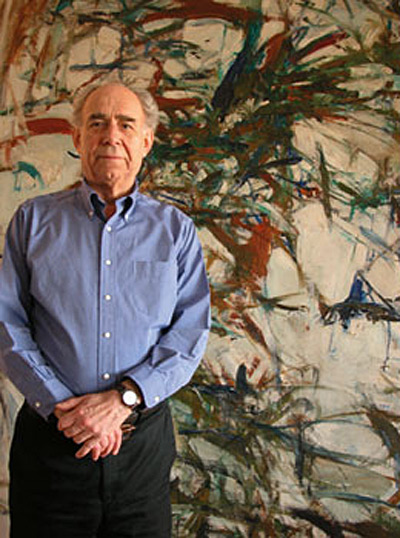 The art of the past century has always had detractors: whether the bourgeois philistines we love to pity, or aging avant-gardists trying to stay relevant as culture keeps moving (to employ a phrase beloved by critic/theorist Clement Greenberg). In recent decades, however, questions about art’s relevance originated within its establishment. Critics Hilton Kramer, Robert Hughes and Jed Perl lamented, albeit wittily, the state of art in Imperial America — and in the global art world - as godless capitalism has spread across the planet, like one of those inky spiders/octopi from WW2 propaganda films. Suzi Gablik’s "Has Modernism Failed?" (1984) assailed art’s ascendancy (or decline) to the status of business, and Tom Wolfe satirized formalist art dogma in "The Painted Word" (1975). If Gablik endorsed later postmodernist practice (ostensibly post-studio, democratic and communitarian) in The "Re-Enchantment of Art" (1992), Wolfe continued his japes, now redirected against postmodernist excess in Reagan-era architecture, in "From Bauhaus to Our House" (1981).

Exposés like Sarah Thornton’s recent "Seven Days in the Art World" (2008) and Don Thompson’s "The $12 Million Stuffed Shark" (2008) chipped away further at what Hughes trenchantly described as “a carnival attached to a stock market.” Recently, critic Dave Hickey blamed his exasperated departure from the scene on art’s gradual transformation into status symbol and investment, and what he calls a “tourist” mentality among passively entertained spectators; it’s become “nasty and stupid” out there. Even promoter extraordinaire Charles Saatchi denounced the “hideousness” (his word) of this arena for “Eurotrashy, hedge-fundy Hamptonites,” “trendy oligarchs” and “art dealers with masturbatory levels of self-regard.” Art historian Julian Stallabrass, no newcomer himself to criticizing the art world, responded to these sallies by chiding both Hickey and Saatchi for what he sees as their roles in creating the spectacle they now decry, which he sees as part of the larger context of social and economic disparity:

Hickey points to the disappearance of the middle class, who leave behind the super-rich and a courtier class, including those of us unfortunate enough to write about art. The evaporation of the Euro-American middle class, as its professions are automated or outsourced, is one of the most troubling developments of our age, and it has been greatly accelerated by the financial crisis. It attacks not just art but the roots of liberal democracy as the class that defended the system is ironically disenfranchised by it. If works of art are vulgar and empty, why should people be any more upset by that than by, say, garish packaging on supermarket shelves?

Were we in the art world just as guilty of magical thinking about aesthetic freedom and the march of prosperity as red-state cargo cultists waiting for the Creation of Jobs? Has art’s financial success, its golden egg, killed the creative goose? If Madison Avenue used to say, "Sell the sizzle, not the steak," are we now consuming imaginary steaks, like people in the Matrix? Is theory the verbal equivalent of a comb-over of a bald spot? Is the late-capitalist art world having a midlife crisis?

In a recent piece (http://brooklynrail.org/2012/12/editorsmessage/art-criticism-today), the eminent art historian Irving Sandler (aided by Elizabeth Baker, Phong Bui, Amei Wallach and Anna Tome) suggested that art writers address, in contemporary terms, Gauguin’s metaphysical questions: Where Do We Come From? What Are We? Where Are We Going? As Visual Art Source has graciously made this space available for essays that go beyond reviews, I’ll take this opportunity to tackle some or all of Sandler’s questions in the near future, and hope that other art critics, reviewers, essayists, theorists. artist-critics, and bloggers will as well in this and other mind-melding venues. Next time: Number 1. What should art criticism be doing?