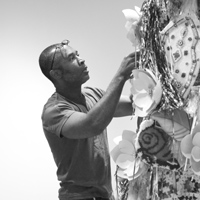 Detail of artist Nick Cave installing one of his 'Soundsuits' at the Scottsdale Museum of Contemporary Art (SMoCA) Photo: courtesy of Peter Bugg. ©Nick Cave

While on exhibition, Nick Cave’s Soundsuits, larger-than-life sculptures that double as costumes for staged performances and spontaneous public interventions, stand motionless and silent. Yet their elaborate handwork—obsessive stitching and ropes of beads combined with multitudinous tchotchkes from grandma’s china cabinet—speaks a visual language that implies an auditory experience. In the silence of the gallery one can’t help but intuit the tinkling and jangling emitted when the sculptures are made to dance. “You have to remember,” Cave explains of his titles, “that sound doesn’t always have to be heard. Like a musical composition written on a page: there is an emotional impact there that looks like sound.” Sheer wonder at the elaborate construction prevails initially when viewing the sculptures. After their imagined noise falls silent, their quiet political implications reach a crescendo.

Though the artist acknowledges that his work ignites timeworn debates about the categorization of craft versus fine art, and refutes antiquated gender associations of the former, he is more interested in the idea that his choice of materials gives rise to pressing environmental issues. Many of the works reference nature, either through natural materials, such as twigs and human hair, or through the appropriation of man-made objects that mimic nature, such as porcelain bird figurines. Recent sculptures fashioned from reclaimed sweaters take the form of endangered species—the repetition of Gap labels highlights the negative aspects of conspicuous consumption at the same time that it suggests ‘upcycling.’ The shadowy specter of cheap foreign production—and inhumane labor practices—is present, but the artist evades overtly political statements about the work and leaves it to viewers to bring their own ideas about its meaning. A dialogue with curator Kate Eilertsen in the catalogue for “Meet Me at the Center of the Earth,” his current solo exhibition, that originated this spring at Yerba Buena Center for the Arts in San Francisco, cites Cave’s personal adage as “always working towards what he is leaving behind.”

Currently an associate professor and chairman of the Fashion Department at the School of the Art Institute of Chicago, where he teaches Fiber Arts, Cave only began to sew in his twenties. In fact, prior to his junior year of college at Kansas City Art Institute, he had never even threaded a sewing machine. In a film posted on YouTube, he describes collecting twigs for an early project and wondering at the effects of their accumulation: What will this look like as a suit? What would it sound like in motion? This early sense of curiosity formed the idea behind his Soundsuits. Now his curiosity is spurred by the accumulation of the Soundsuits themselves; he is currently at work on a project that will engage 90 of the sculptures-cum-costumes in a performance. The live element is essential to his sense of experimentation. Over the years he has staged numerous public interventions, or happenings, that involve sending performers out into the street wearing his sculptures while Cave stands at a remove, video camera in hand, observing the public’s reactions to his work. “I am always putting the work in various contexts. For me it is like gathering data to look at how a pedestrian responds in an intersection, for example. They are not sure what they have encountered, but they are really curious. It is important for me to put it out in the world and get readings. I need to see this curiosity,” Cave adds, a thought which surely echoes that of his audience.
—CHRISTIAN L. FROCK

“Nick Cave: Meet Me at the Center of the Earth” could be seen at Yerba Buena Center for the Arts in San Francisco, from March 28 - July 5, 2009. It is currently on view at the Scottsdale Museum of Contemporary Art, from July 30 - November 29, 2009. The exhibition will travel through 2011 to the Fowler Museum at UCLA, and the Seattle Art Museum.