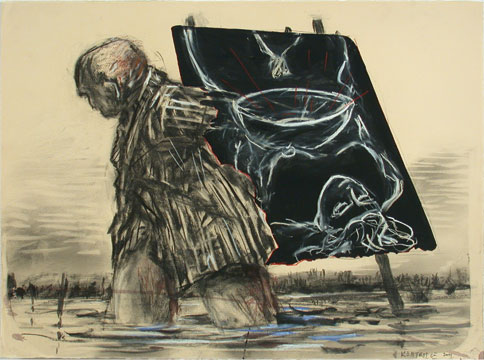 Once during a studio visit with an artist, I found myself distracted by trying to place her accent. When I asked where she was from, she said, “South Africa.” Then she quietly added, “I love my country, but it has a difficult past.” America had just invaded Iraq and I too was familiar with a sense of ambivalent patriotism. “As do I, and my country always seems to have a difficult present,” I replied, and we shared a smile. In that moment there was an understanding between us, two people from very different places, for how one’s love of country is tempered by knowledge of its atrocities.

This complex duality is evident in the early work of Johannesburg-based artist William Kentridge. His hand-drawn animations, begun in the late 1980s, deliver unflinching assessments of apartheid, the legalized system of racial segregation and violence in South Africa from 1948 to 1994. These works uniquely address a broad view of life in segregated South Africa, combining the wider political landscape with the daily personal experience, through the perspectives of his fictionalized characters, greedy capitalist Soho Eckstein and his sensitive alter ego Felix Teitelbaum.

Nine of these early films provide a touchstone for the massive recent exhibition “William Kentridge: Five Themes,” which closed May 31 at the San Francisco Museum of Modern Art (SFMOMA), and will travel to seven other institutions around the world over the next two years. The exhibition illustrates how the artist’s practice has continued to gain complexity, both in his conceptual references and in his astonishing scope of media; though presenting only a small selection of his oeuvre, the exhibition includes 75 works including animated films, immersive multi-channel film installations, drawings, prints, theater models, sculptures and books. In addition, SFMOMA also hosted a live artist lecture/performance and a presentation of Monteverdi’s The Return of Ulysses, a multi-media opera directed by Kentridge.

Despite the wealth of material included, this show is not a retrospective. “From the beginning,” explained curator Mark Rosenthal, “scale needed to be important within the show, but it was also going to be an issue.” In a quest to demonstrate the artist’s range, it was important to provide an impression of his various artistic strategies, but even so, a decision was made to leave out some genres, such as the artist’s tapestries, due to space constraints. The exhibition provides an overview of essential themes that would get lost in a proper retrospective. “The summation of his work is always the films,” Rosenthal offered, but really, as Kentridge often asserts, everything begins and ends with drawing.

William Kentridge was born in Johannesburg in 1955, a third generation Jewish South African of Russian and Lithuanian descent. Privileged by virtue of being white in a racially segregated country, he has spoken of occupying a controversial gap of “otherness” in a country that has always identified as Christian. Though his family name is widely associated with prestigious lawyers, it was evident from an early age that Kentridge would pursue other interests. He attended life drawing classes with his mother as a child and has spoken of his father teaching him to create simple stop-motion animations in the margins of his textbooks as a schoolboy, but he pursued a number of subjects—politics, African studies, mime and theater—before committing to work as an artist.

Charcoal, he has said, suits his ruminations on South Africa, where consuming fires in the winter char the landscape that surrounds Johannesburg. With the thick charcoal that he favors, mark making is a broad gesture that engages the full arm and reflects how physical movement is integral to his work. With each new drawing, he paces in the studio before a large sheet of white paper, as he has said, “summoning the courage to make the first mark,” but then he also moves between the wall and the camera recording his marks and erasures, filming stop-motion animation as the drawing is created. Back and forth he walks, without even an assistant to press “record,” painstakingly unspooling a narrative. His first thought is whether or not to record film, effectively deciding if the work is a discreet drawing or if the drawing process will become animation. Otherwise he makes no advanced determination about what to draw or where to take the story; in the same way that some sculptors have claimed that their forms emerge from the stone, Kentridge’s narratives reveal themselves on the page.

As demonstrated in “Thick Time: Soho and Felix,” one of five themes in the exhibition, mark making and erasure were the exclusive strategies of his early stop-motion animation films. Though his work had been widely received in the niche markets of animation and new media, it was a projection for Documenta X in 1997 that invited attention from the wider contemporary art discourse. Not coincidentally, it was also at this time that his stop-motion charcoal animations, or as he calls them, “drawings for projection,” moved from small monitors to large public projections. The films are experienced in traditional cinematic style as single-channel projections, and the drawings as singular objects. “Occasional and Residual Hope: Ubu and The Procession,” a second theme, presents drawing, sculpture, etchings, and films that combine appropriated documentary photographs and archive film with animations and shadow puppetry.

These works delve into the public hearings held in the mid-1990s by the Truth and Reconciliation Commission to investigate human rights abuses under apartheid—driving home Kentridge’s assertion that South Africa is not “post-apartheid,” but rather “post-anti-apartheid.” Attempts at reconciliation, even now, are like bloody sutures in a gaping national wound. Here the artist draws from his own 1975 performance in an adaptation of Alfred Jarry’s late 19th century story about a corrupt and cowardly ruler Ubu Roi, with deeply moving images of shadowy processions. The sound tracks for his films draw from a range of audio sources; though dialogue is always absent, many incorporate recordings of ritualistic wailing, a sound that universally gives form to grief and transcends language. It is not surprising to find, in a later themed section, that he has turned his attention to opera, a form of narrative performance that privileges authentic movement and dramatic sound over scripted dialogue.

“Parcours d’Atelier: Artist in the Studio,” another theme, demonstrates how his ideas evolved toward immersive multi-channel installations. These works also date from a period of self-reflection, following the dismantling of apartheid and the beginning of Kentridge’s examination of more global political themes. 7 Fragments for Georges Méliès (2003) consists of seven film fragments simultaneously projected on opposite walls, with two more projections Day for Night (2003) and Journey to the Moon (2003) book ending the space. The works combine images of Kentridge in his studio with cinematic tricksterism that pays homage to the early 20th century silent movies of French film director George Méliès, including filmic effects such as puppetry, shadow play and reverse-motion recording. Though the film fragments are simultaneously engaged to create a densely layered experience, his various compositional tactics all share a common simplicity. Kentridge has referred to these tactics as “stone-age technology.” His preference is to draw from the history of theatrical production to create visual impressions rather than employ newer digital technology—in doing so, the artist’s hand is always evident and adds another layer to his physical process.

It is not enough to say that Kentridge is interested to explore how he sees his own narratives unfold, from behind the camera lens, because he is also preoccupied with the mechanics of the viewer’s gaze. Much of the recent work requires active participation: the viewer must physically move through the experience of viewing. “Sarastro and The Master’s Voice: The Magic Flute,” a fourth section, presents a multimedia installation of sculptures, models and projections from Kentridge’s 2005 production of Mozart’s The Magic Flute. The works are activated in rotation and draw the viewer’s gaze around the room, telling stories of the colonialism of South Africa through an interpretation of this late 18th century opera. Unassuming and beguiling, Kentridge’s version is embedded into consciousness through the movements of Black Box (2005), a model theater with mechanical puppets and animated projections. The work brings to mind the layered reading of the Haggadah from a Passover Seder, a Jewish tradition that draws upon a variety of story-telling techniques to convey an oral history of enslavement and engages an audience of all ages.

What Will Come (has already come) (2007), is an installation that presents a stop-motion animation to be viewed in the reflection of a cylindrical mirror. To see the projection directly is to see only distortion, but in the mirror’s reflection, the images are clear. Presented as a kind of conclusion to the work from The Magic Flute, it illustrates a story about Mussolini’s 1935 invasion of Abyssinia (Ethiopia). Here the mastery of the artist’s technique rivals the story that he tells, simply by virtue of the astonishing technical mechanics of his drawing.

“Learning from the Absurd: The Nose,” the last of the themes, presents work from Kentridge’s collaboration with the New York Metropolitan Opera for the upcoming 2010 production of The Nose. Based on Nikolai Gogol’s absurdist story of a Russian official whose nose disappears from his face and turns up elsewhere as a higher-ranking official, I am not me, the horse is not mine (2008) features eight film fragments simultaneously projected on all four walls of the gallery. Each fragment begins with text moving across the individual projections in a manner that imitates the arced turn of a globe before visually diverging into different images and animations. The audio component is a racing cacophony, zipping through the room. Teleprompter-like text scrolls down one projection, relaying Nikolai Bukharin’s 1937 testimony before the plenum of the Central Committee of the Soviet Communist party, while another projection shows a hand pulling through a stack of black and white photographs, the face of each figure bearing an outsized cut paper nose. Presenting the viewer with a cacophonous environment, the immersive installation invites viewers to create their own experience of the narrative. As a whole of eight parts, the work is about six minutes long; however, it has no central perspective, nor is the duration overtly finite. The brief darkness that signals ending and beginning is like a chance to take a big breath before diving in again.

“The hope,” Kentridge writes in the catalogue, “is that the succession of images and the connections between them will show not only the way forward for the narrative... not only a revelation of who one is, but also a hint as to how to go forward in the world outside the studio, as if the gradual accretion of marks can somehow lumberingly draw agency into existence.” But what is this notion of agency, so different from our understanding of it as American vernacular? With curator Mark Rosenthal’s assistance, I asked the artist myself. “Agency,” Kentridge explained in an email, “means the confidence to be active in the world, and not simply a passive recipient of the world as it appears to one.”

“William Kentridge: Five Themes” unfolds from room to room with each themed work building upon the ideas and experiments set forth in previous works. From his early drawings, created with the oldest and simplest of instruments, to his present day large-scale multimedia productions, the artist has cultivated a form of activism that is compelling in its ability to transcend cultural differences, languages, and national borders: It does not only demonstrate confidence, it begets confidence.

Initially significant for his animations about South African life and apartheid, Kentridge’s work was simultaneously groundbreaking because it brought animation into the discourse previously reserved for conventional notions of fine art. Today he is widely recognized as one of the few artists to successfully bridge careers across the generally distinct disciplines of fine art, film, and performance. Perhaps because he is so difficult to categorize, William Kentridge effectively demonstrates agency, in a world that creates boundaries where none are needed.