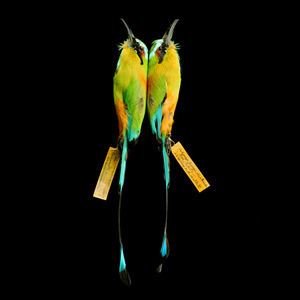 The photographic practices of Mark Laita and Rodney Smith demonstrate an acute attention to form, composition, and revel in the act of looking. Whether it’s marveling at the juxtaposition of geometric contortions and scale patterns of exotic serpents or capturing an alluring woman who never acknowledges the camera, the photographs uncover animal and human subjects in contained environments that are only real by virtue of the recording fiction of the camera. Laita’s comprehensive series of archival pigment prints “Amaranthine, Sea, and Serpent” archive majestic creatures of the air, land, and sea posed against a black backdrop whereby every detail of their anatomy becomes illuminated. “Colored Songbirds” presents a psychedelic songbird representing nearly every color of the spectrum. Aged toe tags attached their rigid feet indicate the date and location the specimen was recovered, as well as its sex and catalogue identification number. Laita infuses vitality into the songbirds even though their bodies have been preserved for nearly forty years. By using a hyper deep focus the songbirds appear as three-dimensional images, their presence and detail offering a vivid glimpse into the anatomy of a mysterious species.

Just as Laita labels his photographs by the type of species that is depicted, Smith presents his subjects in a similarly anonymous manner. “Cardine from Behind” seems a riff on a Vermeer portrait in which the viewer’s vantage point come from behind the subject, allowing us to peer into a world where our presence is unnoticed. A diamond diagonal flooring leads the eye to the back of a graceful woman who is painting a self portrait of the back of her own head. The portrait mimics the braids in her hair, offering no suggestion of her face. The act of looking becomes a complex game wherein the viewer is left with more questions than answers (Fahey/Klein Gallery, Miracle Mile).