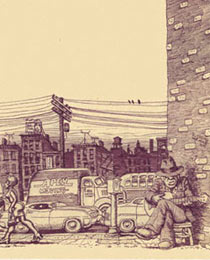 There was something about the self-published comic “Zap Comix” that, when it first appeared in 1968, immediately struck a chord. It was angry and hilarious, full of adolescent high jinks yet obviously intellectual, and at once realistic and utterly surrealist. The drawings were so 19th century, but the content completely fit that year of political rebellion and cultural invention. The lead and instigating cartoonist was R. Crumb, who had recently fled the east coast and an obnoxious family life for San Francisco at the very height of the Haight and hippie psychedelia.

Not unlike nor unconnected to the dramatic rise and development of rock music, Crumb was the unlikely geek leader of a group of game changers. If the emergence of the so-called underground comix came on the heels of Pop Art, it fed on popular culture in a way much closer to home, and was generally indifferent to as well as ignorant of the art historical context that informed that parallel track. If Crumb aspired to anything art-wise prior to pouring out the cynical brilliance that flows throughout this survey, it was to join the commercial comic book industry that spoon fed superhero fantasies to mainly adolescent boys. Neither Warhol nor Picasso counted anywhere near as much as George Herriman, Jack Kirby and Harold Gray.

Right from the moment the quasi-enlightened Mr. Natural began trucking across our mental landscape, those rotund and heavy volumes brought to life with idiosyncratic yet precise rapidograph crosshatching, the stuff was familiar. But it was completely new. What had always been for kids suddenly no longer was. What had always been a morality play in which Good triumphed over Evil was smashed with the same joy you might have stomped a sand castle just before your parents took you home from the beach. Subjects like eroticism and racial stereotyping were thrust from dark and hidden corners into direct, confrontational exposure. If you were a comic book reader, in all probability your parents mildly disapproved of the diversion; now this was something to make them howl. Delightful!

Over forty years later it is surprising how well Crumb holds up. For one thing, if we have since seen a deep bench form behind the pioneer, there is a disarming lack of artifice and aesthetic pretension in Crumb’s comix, drawings and even sculpture. It allows some of the original shock value to hold up. That charge is present in an early “Fritz the Cat” strip satirizing liberal empathy in an argument among the characters over who is the most “sensitive,” as well as in a much later self-flagellating depiction of his own erotic fantasies such as “How to Have Fun With a Strong Girl” (2002). The butt of this satire is just as much you and me and Crumb himself as that much maligned “establishment.” It’s a body of work that narrowly misses becoming repetitively self absorbed to the point of boredom. If Crumb offends you with his frank admission of narcissism, witty self parody is so much a part of this act as to make the truth of it forgivable. The knockout punch is his power of invention, featuring a roster of characters so individually off the wall as to make your head spin.

Back in the day what made him such a hero was that so many felt he spoke on their behalf. But, not unlike Dylan or, better yet Frank Zappa, the distance in time and a little biographical back checking reveals a sharper edge and a refusal to engage in cheerleading. Before “political correctness” was an operable term Crumb continually made fun of the mindless conformity and was an inevitable ballast of the counterculture as it rapidly went mainstream. And what is reflected in the body of work here is not in the manner of good natured criticism. The man despises the lot of us. When he and his wife moved to France in the early ‘90s he was getting the hell out of Dodge. The American mind set never suited him, and the pair have worked there, by most reports relatively happily ever after. So he’s gone, but we are happy to say it’s not a good riddance.