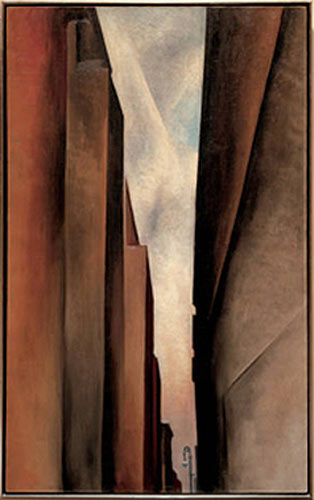 Inspired by the Georgia O’Keeffe Museum Research Center’s 2006 symposium, “Painting and Photography in American Art: Sources, Ideas and Influences, 1890s to the Present,” “Shared Intelligence: American Painting and the Photograph” was organized by co-curators Barbara Buhler Lynes and Jonathan Weinberg to explore the ongoing and mutually informing dialogue sustained between these two media since the dawn of American modernism. Surveying both representational and abstract visual modes, addressing the migration of painterly strategies and optics-aided approaches between media, and probing the specifics of each technology, the exhibition benefits from a tightly edited selection of signal works that mark decisive shifts within our visual culture.

Corresponding to “Shared Intelligence’s” roughly chronological formatting, a selection of paintings and photographs by Thomas Eakins is the first to greet visitors. Together, they demonstrate that, by 1881, painting had already absorbed and replicated the distortions inherent to photographic capture: heightened illusionism linked with a limited depth of field. Adjacent to Eakins is a selection of Man Ray’s eponymous 1920s Rayographs, which illustrate the means by which photography had, in turn, annexed elements of both collage and cubist spatial organization.

Deftly navigating between the museum’s mission and that of the exhibition, its curators have ensured that O’Keeffe’s presence resonates throughout, yet they do well to avoid its registering as an obligatory inclusion. “A Street” (1926) whispers to Stieglitz’s “New York from the Shelton” (1933-35); “Blue Flower” (1918) echoes in Edward Weston’s iconic “Artichoke” (1930). Each not only is emblematic of her process but also posits painting as a catalyst for photography’s then-burgeoning stylistic range. Underscoring O'Keeffe's own surety regarding this transformation, a prominent wall text recalls her noting: “[Paul] Strand was the first to consciously use in photography the abstract idea that came to us through cubism.”

After investigating linkages between social realist painting and its photographic source materials in the works of Ben Shahn, Norman Rockwell, Maragert Bourke-White, and Walker Evans, the exhibition segues into a representative selection of Photorealist touchstones. Works by Robert Bechtle, Richard Estes, and Audrey Flack, manifest a rejoinder to both the mechanization of Pop Art and Abstract Expressionism’s dissolution into mannerism – at once haunted by and humanizing the lens’s distortions.

Works that actively reflect upon originality, authorship and identity in the wake of Andy Warhol may be the exhibition’s high point. Three works by Warhol repeat, fittingly, his singular synthesis of photography, silkscreening, and painting. David Hockney’s “California Copied from 1965 Painting in 1987” (1987) appropriates himself. Barbara Kruger assumes a singularly disorienting position between parody and cliché in the age of imagery’s infinite reproducibility. Cindy Sherman reflects upon female vulnerability even when replacing personal authenticity with artistic posture – invoking Holbein the Younger for added historical reach. And, reflecting upon the persistence of the particular art historical discourses staged earlier in the exhibition, the inclusion of Sherrie Levine’s appropriations of Stieglitz’s “Equivalents” epitomizes the capture of abstraction from the natural world to the historical. In atomizing the past’s images, these may be the models that most clearly address the future’s necessarily uncertain horizon – a stunning coda to a well-hewn show.