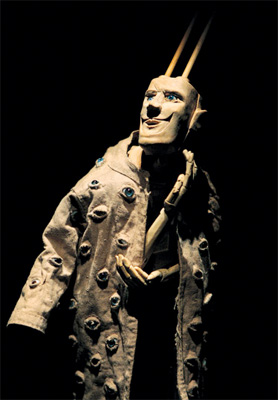 "Three Fragments of a Lost Tale," John Frame's first solo show since 2005, is a brief look into the artist's ambitiously scaled current project. The exhibit at the Huntington Library, which opened March 12 and runs through June 20 and includes Frame's sculpture, still photography, and a short stop-motion film, is really only a snippet of what the final product will be. Over the last five years, the 60-year-old artist has been working on The Tale of the Crippled Boy, an elaborate story of his own devising, which he plans on turning into a lengthy stop-motion film. To realize his vision, Frame created new figurative sculpture that he endowed with the capacity for movement: mouths open, eyes roll, arms gesticulate.

Located in San Marino, CA, just east of Pasadena, the stately Huntington is an unusual venue for a contemporary exhibition of this nature, as the Library rarely shows the work of living artists. The Huntington's extensive collections, which contain 18th- and 19th-century British painting and decorative arts, Renaissance paintings and sculpture, and other European art, also include American art, but for the most part, only up to the 1950s. The Huntington's mission really is to exhibit its current collections to the public, which it believes, "speak to our contemporary audiences because they reveal the complexity of the human experience." It is in this commitment to exploring the human condition that the Huntington and Frame share common ground.

Although Frame received his MFA from Claremont in 1980, at a time when theory had begun to exert a profound influence on artistic practices, Frame felt an affinity with the writings of Shakespeare and Blake and with Medieval and Renaissance art. Frame's exploration of the human experience through his sculpture--the suffering, the folly, the loneliness and struggle for meaning--makes the Huntington a fitting setting for his new work. In a related exhibit that runs concurrently with "Three Fragments," Frame was invited to select a group of paintings, drawings and prints from the Huntington's collection of William Blake's works to provide a sense of the work that inspires him. That concurrent show, titled "Born to Endless Night," includes illustrations that Blake created for the Book of Job and for John Milton's Paradise Lost.

Frame's affinity for literature that speaks to the complexity of human experience originates in his work as an undergraduate at San Diego State University, where he studied Shakespeare, Milton, Blake, and Modern Absurdist Theater. It is this strange mix of old and new that is reflected in Frame's work as an artist and in the concurrent exhibits at the Huntington as well as in his personality. Frame is an intentionally anachronous contemporary artist, whose practice sits at the periphery of the contemporary art world; he is quirky, yet distinctly of his time. It is in this paradoxical union that Frame sheds new light on the Huntington's collections, while the Huntington provides a remarkably deep historical context for Frame's oeuvre.

Frame's first inkling that he would be an artist came to him while watching an Ingmar Bergman film. Although many of his sculptural works offer an incomplete narrative--they are vignettes of a sort--since beginning his latest project, The Tale of the Crippled Boy, Frame has delved into something more continuous. His move to film is, in a sense, a return to his formative years. As The Tale of the Crippled Boy is in the early phases of development, the short film being screened in "Three Fragments" is a string of approximately eight vignettes. Frame has scripted and story-boarded another thirty to forty scenes that he expects to film when his sculpture returns from the Huntington. Until that time, "Born into Endless Night" and "Three Fragments" intersect each other in symbiosis, each investigating the vagaries of the human experience.