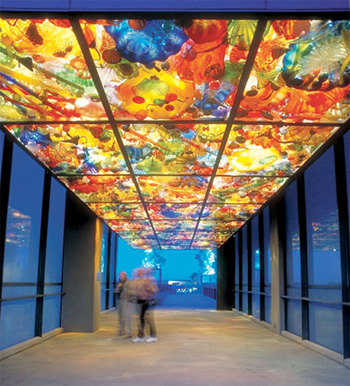 It is a material that glows and oozes when hot and hardens as it cools, creating a record of the processes that brought it into being: lava, the material that formed the volcanic Cascade Mountain range, the backbone of the Pacific Northwest. There is another material that comes from the earth and bubbles and seeps when molten, then hardens as it cools: glass, which is as endemic to the region's visual-arts culture as lava is to its geology. There is something poetical about these materials' linkage in this colorful, fiery part of the world. Arguably, contemporary studio glass is the region's most profound aesthetic contribution to the wider world, for the artists working in glass, who cluster here, form a nucleus of community in a way that Northwest painters, sculptors, conceptual and installation artists, and new-media types thus far have not managed to equal or surpass. This may be attributable to the glass-specific infrastructure here, some of whose components have been in place for going on half a century. The anchors of this culture include a magnetic superstar, Dale Chihuly; an educational institution that has become a nexus, the Pilchuck Glass School; a spatially invigorating and imaginatively curated showcase, the Museum of Glass in Tacoma, Washington; and the powerful one-two-punch of a manufacturer-cum-gallery, Bullseye Glass Company and Bullseye Gallery.

The convergence of these factors over time has plotted the Northwest as a point on a broad, ocean and continent-spanning triangle that encompasses the essence of innovation in studio glass. Along with Venice, Italy--home to fabled and still envelope-pushing artists and artisans on the isle of Murano--and Canberra, Australia--site of Australian National University's world-renowned Glass Workshop--the American Northwest has become an important catalyst in glass' emergence from the ghettoization of "craft" and its assumption into the boundary-busting, polyglot eclecticism of post-postmodern artistic practice. In such a climate, it is fitting that the Glass Art Society's 2011 conference, Creative Crossroads, is being held in Seattle this summer between June 1-5, and that Bullseye Glass' conference, BECon 2011--Crossover: A Material Exchange, will be held in Portland from June 16-18.

Like another native son in a different field--the late gastronome and native Portlander, James Beard--celebrated glass artist Dale Chihuly has brought renown to the terroir of his roots. Unlike Beard though, Chihuly, who was born in Tacoma, did not move to New York to make his name. Although he has traveled widely during all stages of his career, he has kept his home base in the Northwest. Moreover, in 1971 he co-founded, along with John and Anne Hauberg, the Pilchuck Glass School in Stanwood, Washington. Even as he became a breakout commercial success, as close to a household name as any contemporary artist in recent memory, and even as he developed his unique visual vocabulary of blown-glass components unified in often soaring designs that recall sea life and otherworldly confections, he has continued to share his knowledge with emerging, mid-career, and established artists from around the world through the summer workshops and residencies offered in Pilchuck's idyllic setting.

The school's import is hard to overestimate. Seattle-based conceptual and installation artist Mark Zirpel, known for his pseudo-scientific installations that verge on the bizarre, speaks of his first experience at Pilchuck in 1994 in transformative terms. "Up until that time," he recalls, "I hadn't been clued into the idea of a community of any sort. To me,'community' was a radioactive word that involved PTA meetings and Little League games, but at Pilchuck I found a really generous community that was invented for the benefit of education. It was overwhelming. There were 100 people there who were so enthused, it was almost like a cult! I was peeking through the blinds going, "Wow!' It's so completely immersive, that in a couple weeks' time, you learn a year's worth of stuff!"

Seattle, Tacoma, and Beyond

One of Dale Chihuly's most impressive large-scale works, the Bridge of Glass that bears his name, numbers among the highlights at the Museum of Glass in Tacoma. The bridge, a 500-foot-long pedestrian overpass, is filled with vessel forms set up in elaborate, shadowbox-like viewing portals. Its ceiling a riot of seductive forms and exuberant color, the passageway links the museum and the environs of downtown Tacoma and has become a major attraction. The museum itself opened its doors in 2002, boasts 13,000 square feet of exhibition space, and regularly programs exhibitions of internationally recognized artists in addition to offering educational programs for the benefit of artists and the public.

If Pilchuck is the educational heart of the Washington State glass scene and the Museum of Glass is its institutional anchor, the commercial hub would undoubtedly be Traver Gallery. With a location adjacent to the Museum in addition to its downtown Seattle flagship, Traver opened in 1977 and has long stressed glass work in addition to other media. Among the heavy hitters who exhibit here are Chihuly himself, Deborah Horrell, Venetian master Lino Tagliapietra, art-and-design integrator Orfeo Quagliata, and studio-glass pioneer Paul Marioni, to name only a few. Marioni's son, Dante Marioni, is an artist well known in his own right for his jaw-droppingly virtuosic vessel forms, often elongated in silhouettes reminiscent of Empire-waist dresses or Giacometti figures. Traver Gallery gave the artist his first solo show in 1987.

Another artist who exhibits with Traver, Richard Marquis, has had enormous impact on the medium. Marquis lives and works across Puget Sound from Seattle on bucolic Whidbey Island. In the late 1960s he learned glass blowing from the Venetians when he traveled to Italy on a Fulbright Grant. Instead of hoarding the knowledge his hosts had imparted, he shared it during an ongoing series of workshops over the course of the next three decades, in the process contributing to the blooming of a latent glass movement in Australia. Marquis' whimsical style incorporates stylized racing cars, eggs, potatoes, warships and submarines with "Razzle Dazzle" camouflage patterns, and a plethora of other motifs that play beauty against mundanity. It's a juxtaposition echoed in his droll bearing, a kind of Warholian literalism couched in folksy bonhomie, which can catch arts writers off guard. When asked about the forms he employs in his work, Marquis answers: "Over the last 10 years, I've noticed my shapes are getting simpler. I've pretty much eliminated putting handles on anything. I noticed that whenever you put handles on something, it devalues the piece by about a thousand dollars." He mentions his iconic American-flag teapots, which put him on the national map in the 1970s. "Now I look at the same shape and think, 'I need to remove the handles.' Just because you're good at something doesn't mean you should do it; I can make really nice handles."

Portland in the Center of the Bullseye

Marquis' gallery in Portland, Bullseye, has a history entwined with his own and with that of glass in the region and beyond. Bullseye Glass Company was the brainchild of three glass blowers--Ray Ahlgren, Boyce Lundstrom, and Dan Schwoerer--who in 1974 founded Bullseye to solve technical problems that were bedeviling their own work. The product they eventually developed was a glass that would be compatible with other glasses and withstand multiple firings without cracking during the cooling process. Schwoerer, who today co-owns the company with his wife, Lani McGregor, continues to oversee technical innovations that benefit artists engaged in specific projects. McGregor, who directs the 15,000-square-foot Bullseye Gallery in Portland's perennially chi-chi Pearl District, remarks that, "In our experience, the most successful projects we've ever done have resulted from the needs of a single artist. What they need might be something there's no market for yet, and the only reason anybody would want to help them is because it's brilliant. That's sort of where the whole company started." She invokes Klaus Moje, the Hamburg, Germany-born artist who is equally known for his intricately patterned platter forms and wall panels and for founding the highly influential Glass Workshop in Canberra, Australia. "Klaus wanted to do something people weren't doing at the time, and which there was no market for. He needed an entire color palette of glasses that could be melted together in a kiln and, once cooled, would be sufficiently free from internal stress that they wouldn't break."

Moje takes up the story. "Color is my fascination. It's a never-ending challenge to explore and extend the envelope. So one of the luckiest moments of my life was when I met with Dan Schworer and Boyce Lundstrom at Bullseye, and they were fascinated by what I needed to do, and said to me, 'We'll produce a palette for you to have a wider range of colors available.' I remember thinking, 'These Americans are just loudmouths!' But after awhile they figured it out, and there was a box of Bullseye Glass on my doorstep, and I never looked back."

Bullseye's leadership has taken pains to work with artists who come to glass from other media in the interest of cross-pollination. Examples include Carrie Iverson, who came from a background in printmaking and political art; ceramic sculptor Jun Kaneko; and Joanne Teasdale, who combines her first two passions, painting and photography, with novel and psychologically incisive approaches to glass. Bullseye is also committed to bridging the divide between glass blowing and kiln-forming. With the gallery's encouragement, longtime glass blower Dante Marioni has made successful forays into kiln-formed glass; and a seminal Bullseye workshop in 1998 yielded a technique known as the "Australian roll-up," which is essentially an integration of blowing and kiln-forming.

A big-name art star, established infrastructure, a sense of community, and technical innovation number prominently among the factors that give the Pacific Northwest heightened luminescence in the constellation of contemporary glass. But there is something else, too, something beyond, which ties these disparate strings together: an esprit de corps that bears at least a modicum of resemblance to the pioneering spirit that brought pioneers along the Oregon Trail in the mid-1800s. It is an imperative to circle the wagons when needed for safe haven but above all to push forward, to venture, to act. Couple this spirit with glass' fluency across the range from transparency to opacity, and the near-inexhaustible ways it can be deployed to formal and thematic ends, and one begins to discern a synergy of materiality, history, and locale that knows no limit.