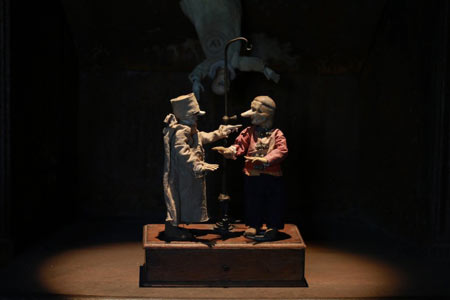 John Frame, ''It’s in the Can,'' animation still from ''The Tale of the Crippled Boy,'' wood, mixed media.

The sculptures of John Frame have always had an air of narrative about them. Meticulously carved and delicately posed, his wooden figures have often suggested actors in a grand drama, caught mid-action by the spotlight. Viewers tend to stand before his sculptural tableaux as if waiting for the play to resume; puzzling out what they can by gathering clues from the figure’s masks, their expressive gestures and fragments of words that bounce helplessly off the figure’s wooden lips. These latest works take the next step. He ups the emotive potential of what was implied theatre to present a fully staged, puppet-performed film. Remarkably, his work loses nothing of its power or enigma with the fleshing out.

Frame’s “Tale of the Crippled Boy” is a film work in progress, based on a dream that jolted him awake and was so compelling he feels he will be working with it for the rest of his life. A non-linear epic, it offers a shadowy tale of loss and aspiration, life, death, suffering and renewal. It’s an engrossing and disjointed narrative made even more compelling by the fully articulated figures and stage sets that occupy the adjoining galleries. The figures from this tale are often strange characters, not always fully human, often missing limbs, sometimes sprouting twigs and leaves from elongated noses like Pinocchio. With their working pulleys, glass eyes, and various missing parts Frame’s figures extend his sculptural investigation of timeless themes regarding the ambiguity of life’s meaning. Concepts of vulnerability, individual freedom and cosmic manipulation are made visually dramatic and emotionally provocative.