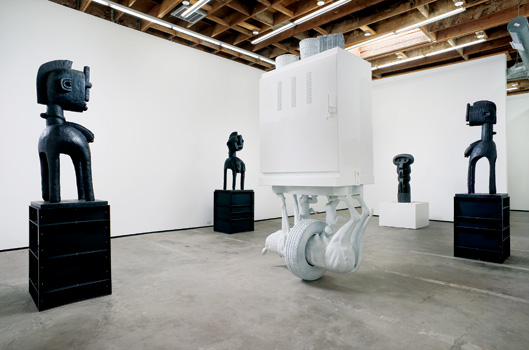 Among the new generation of young, LA-based sculptors who reference modernism explicitly in their work, few do it with the wit, smarts, reverence, irreverence, and sheer jaw-dropping, eyebrow-raising joie de vivre of Nathan Mabry. To anyone who would dare think of modernism as reductively monolithic, Mabry emphatically reminds us that it is, in fact, a shifting bastard polyglot. Despite the clean geometries of modernist sculpture at the apex of its rigorous refinement in the 1960s and '70s--as evinced by artists such as Donald Judd, Carl Andre, and Tony Smith--much of modernism's early and more figurative variations were inspired at least in part from observation of so-called 'primitive' and ethnographic art. If Picasso's Demoiselles d'Avignon, basking seductively in their African masks, are the sirens on the rocks of this Neo-Primitivism, beckoning us back in time to the rocky shores of modernist appropriation, Mabry has clearly succumbed to their call and had his way with each of them (on a platform bed by Judd). One might well think of his works as their festive mutant love children.

To Mabry, examining modern art, and the source imagery that inspired it, go hand in hand; that examination, in many ways, forms the basis of his practice. "That's how my interest in modernism developed," he reflects, "looking at the African artifacts (and also pre-Columbian), how they were poached by the Modernists." For all his evident humor and personality--using artwork as a ready-made, he is both Duchampian and a kind of art historical hip-hop sampler--he deliberately eschews any individual 'style.' Rather, acting more as a director than performer, he steps back to engage the aesthetics and meaning of the imagery that is most compelling to him. "My own personal 'style' is using the actual artifacts that the artists were looking at, as an approach," he explains. "For me, it's more about questioning the ideas of authorship: who culturally owns these images?" He adds, "It's such a given for us, that no one actually questions where it came from. Modernism existed from these poached images, for the most part."

Mabry's early works, as first seen by many in the 2005 group show at the Hammer "THING: New Sculpture From Los Angeles," were deliberately and boldly collisive, often contrasting ethnographic figuration with stark modernist bases, as in A Touching Moment (Tooting My Own Horn), in which a pre-Columbian terra cotta fellow is shown playing a traditional pipe, seated snugly atop a Tony Smith-like geometric base (the work was included in the Dean Valentine Collection that was donated to the Hammer in 2007). Others were more explicitly raunchy, as in A Very Touching Moment (Cunning Linguist), in which a pre-Columbian couple, one with an owl mask and the other a skull, mount each other while enacting an expression for cunnilingus, while sitting on a blocky Carl Andre. The melding of punny sexual innuendo and teasing modernist sacred cows gave Mabry a mischievous bad boy reputation that belies his seriousness. Yet at the same time he was also turning Flavin-style light tubes into feathered Native American fetishes, revealing the ritualistic, even spiritual, aspect that also, no less, underlies his work.

Whether indicating the sacred or the profane, or both at once, his work presents them as elements of common experience; likewise, he is not afraid to point out the ritualism, and perhaps even mysticism, that underlies our own worship of modernist art and culture, and in particular objects. "I see sculptures as being highly spiritual objects," Mabry says. "Just as ritualism is important in pre-Columbian objects... No matter what, it's still about the ritualistic, human experience." It is not a cynical comedian who will describe his idea of sculpture--and his own work--as "these mysterious, magical, metaphysical objects."

As seen this winter in his solo show at Cherry and Martin, titled "Armature," Mabry's recent works highlight this loopy, hybrid ritualism on a number of levels. As conceived and installed in the gallery's Culver City space, the works took on the aspect of a warped modernist temple. Flanking the space on three sides, gazing toward its center, are three black works titled Tete de Femme, figures made from Mohawked female Baga D'mba shoulder masks with faces composed of phallic novelty sausages, set on modular Donald Judd-inspired bases--their individual titles (Juicy), (Plump) and (Spicy), respectively, referring presumably to the variety of sausage they are made from. At the front end of the space was a replica of Figure, a 1926-30 a modernist column-slash-figurative sculpture by Jacques Lipchitz, owned by the Norton Simon Museum, with added plumbing so that it seems to "cry" from its eyes: perhaps a fountain for priests to wash their hands? The centerpiece, painted white, was a work titled cryptically The Week of Kindness, positing a rectangular electrical utility cabinet with wicker baskets on top, set atop an upside-down statue of Romulus and Remus suckling from their wolf-mother, whose waist is banded by a tire. The gibe at Rauschenberg's famous taxidermied goat, from 1955-59's Monogram, aside, the upside-down work is a balancing act both physically and conceptually, this time setting the modernist "base" atop the tableau of figurative antiquity. Plopped nearby was a rusted steel cube recalling Tony Smith's Die (1962), which seemed to be uncoiling like a puzzle box into a hand about to give the viewer the finger.

Mabry's own studio, on the southern edge of Culver City, contains an equally diverse hodgepodge of artworks and materials (not surprising, for someone who studied with Paul McCarthy and Adrian Saxe at UCLA). Near the door are a pair of African statues--Senufo Rhythm Pounders from the Ivory Coast (or knockoffs), the same sort of statues he thinks Lipchitz may have been looking at when he created Figure. "A lot of people don't know how Henry Moore was inspired by pre-Columbian," he notes, as we shift to pre-Columbian. There's also a maquette of another Tony Smith-type piece; a cast model of Rodin's 1889 Burghers of Calais; some masks of team mascots (a bull, a cat, a pirate); a large-size B&W folio of Picasso's works, barely bound together. Thumbing through it, we find a page on Picasso's sculpted Tete d'Marie Therese : its eyes and nose bulging. "They look like Muppets, so goofy..." he observes, admiringly.

The eclecticism of his physical space clearly echoes Mabry's curiosity. And although his work seems often steeped in irreverent humor, the underlying affinity is never too far off. While Mabry eagerly invites a wide range of interpretations, the one he somewhat bridles at is the idea that he is trying to make a message or demean the works he riffs on. "I'm not making a statement," he explains. "I'm not mocking, I'm just using the visual language, using the visual metaphors." He sees his works as evoking a range of art experiences, of human experiences, and even calls them playfully "choose your own adventure." "You can focus on the beauty of the aesthetics, you can focus on the combinations... there's a lot of different routes to go." He adds: "I want to use the ready-made, the hand-made, the collage, the computer... all sculptural approaches."

Call them post-modern, neo-modern, or whatever, Mabry's quirky hybrids are, in their own loopy way, a questing acolyte's homage to the artworks that inspired the artists who preceded him, and, implicitly, the human experience underlying both. Besides their wit and teasing dualities, it is that odd blend of weirdness and ritualism that resonates most. "It's like these objects at the Met," he conjures. "You have Oceanic, you have AfricanÉ pre-ColumbianÉ It's art history, but with my own fucked-up language. I want it to feel like that dream you have about the Met."