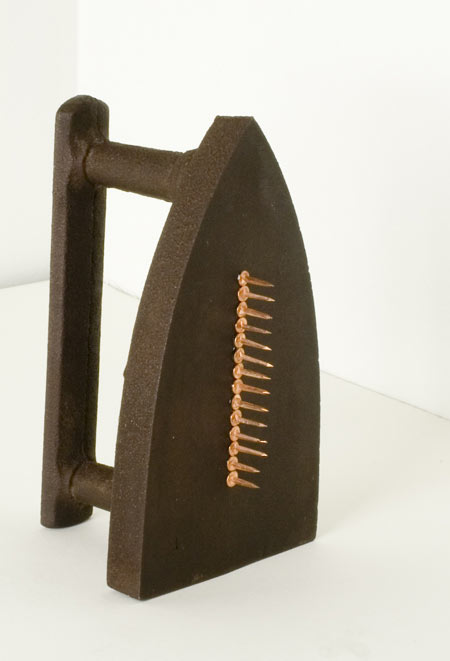 Construction of art from debris, the detritus of an industrial civilization, is a distinctly modern invention of the 20th century. The use of materials, frequently distressed, whose physical life has outlived their initial function, most often banal, can inherently and readily serve as a commentary on the social technocracy that produced them. Works constructed from such hybrid materials can speak with whimsy or gravity, providing a range of aesthetic articulation as uniquely and powerfully expressive as paint or clay, traditional artistic materials with which they are frequently combined.

What distressed material, having outlived its initial functionality, could be more evocative than the human skull? These are artifacts that Hans Burkhardt used in his monumental 1968 oil and assemblage work titled “Lang Vei,” a viscerally confrontational object that serves as an insistent mournful admonition about the cost of war and a remembrance of the victims of the Holocaust.  This is not the first time the gallery has given this Burkhardt masterpiece pride of place. In the context of "Some Assembly Required," a panoramic survey of 50 works of assemblage and collage it is fitting. “Lang Vei,” as much as ever, retains its relevance in the 21st century.

Assemblage is an especially vital tradition in California and Los Angeles. The work of West Coast artists working in the genre is nicely surveyed, including examples by Gordon Wagner, Bruce Connor, Wallace Berman, George Herms and others. Wagner’s 1950 wood and mixed-media piece titled simply “Construction,” with its eclectic stack of drawers, evokes a suggestive poetry dedicated to the contents hidden behind those blank and time-worn facades. Herms’ “Table Number Forty Two” (1995) openly reveals its contents within a series of panels. The rusted objects are commonplace, but in Herms’ creative handling they become unfamiliar and strange. They have become useful in a mutely articulate manner: the creation of what seems to be an alien grammar.

It is this shift from the pragmatically familiar to a displaced functionality in the service of atmosphere and a mood of poetry that underlies the emotive force of the art of assemblage. When Isidore Ducasse, the “Comte du Lautreamont,” in his 1869 novel “Les Chants de Maldoror” wrote, “there is nothing so beautiful as the chance encounter of an umbrella and a sewing machine upon a dissecting table,” he foreshadowed the entire art of assemblage, both aesthetically and materially, as it was to evolve in the 20th century. It is the fortuitous juncture of unlikely materials in an entirely new setting that confers new meaning upon the object. By such means the artist becomes a shaman, conferring new status, functionality and beauty, upon a despised object.

Maldoror became a kind of bible for the surrealists in the 1920s and a vital strain of provocative art-making has continued to the present out of this tradition of the unlikely marriage of objects and images. Joseph Cornell, one of the avatars of this tradition, is represented in the exhibition with a 1935 collage titled “Poetry of Surrealism.” And no survey of such tradition would be complete without Man Ray’s pioneering 1921 object titled “Cadeau,” an iron wittily rendered dysfunctional by a row of nails glued to the bottom? The example of “Cadeau” here on view is from an iron and brass edition of 1974.

The painterly tradition combined with assemblage can be seen in works by Ed Kienholz, Patrick Graham and Mark Tobey. Tobey’s 1954 mixed-media “Untitled (Palette)” demonstrates with nice flourish one final use as wall art for a commonplace object to be found in the artist’s studio. In the back gallery a new assemblage by Jordi Alcaraz illustrates assemblage in deft service to wit as observational humor. Alcaraz’s 2010 wire, plexiglass and wood construction, titled “To Catch A Drawing Mid-Air,” depicts a line drawing escaping the 2-dimensional confines of a wood frame on the wall to hover out in the gallery space. It is both a tongue-in-cheek form of visual pun as well as an inventive reminder of the undiminished possibilities for the art of assemblage that are still vital after 150 years of practice.