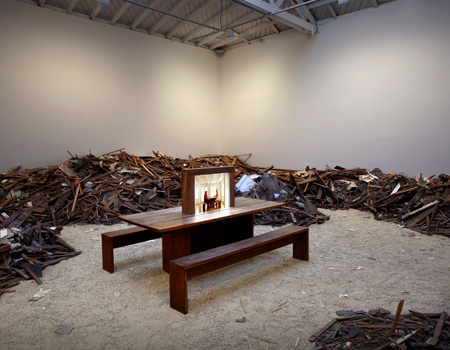 In a culture over-saturated with media, how do we make sense of the information that bombards us? The constant input of sights, sounds and smells has made us accomplished multi-taskers, capable of diverting our attention from one thing to another while still able to glean meaning. Doug Aitken focuses on what is often overlooked. His works--multi-screen video installations, single-channel films, photographs and artist's books--are about the relationship of the part to the whole and how fragments can be assembled to create a narrative. His scope of inquiry ranges from the micro to the macro, from the natural world to the built environment, and in his works he investigates the cyclical process of creation and destruction and the plight of the individual in urban society.

Born in Redondo Beach, CA in 1968, Doug Aitken currently resides in Los Angeles. He studied at Art Center College of Design, receiving a BFA in 1991. Aitken's work has been included in exhibitions in major museums worldwide including the 1997 Whitney Biennial and the 1999 Venice Biennial where he won the Golden Lion International Prize for Electric Earth. Aitken excels at creating site-specific installations and has been commissioned by institutions including London's Serpentine Gallery (2001), the Museum of Modern Art in New York (2007) and the 55th Carnegie International (2008). These site-specific works are often presented on the facades of buildings where the combination of projected images and sound draws a huge crowd and becomes a must-see event in the tradition of a performance or happening.

While Aitken makes exquisite individual photographs and single-channel videos, it is in his multi-screen installations and artist's books that his unique ability to amass disparate elements and create meaning out of reassembled fragments has the most impact. The relationship between the books and the installations is fascinating, and Aitken is one of the few contemporary artists working in multi-media that creates artist's books as stand-alone works or that coincide with his exhibitions. These books go beyond the traditional catalogue and offer insight into how Aitken paces and creates narratives from both static and moving images. Flipping through the pages of a book, like looking at an installation, requires active viewer participation and offers the opportunity to go forward and back, to revisit that which was already viewed.

Metallic Sleep (1998) was one of Aitken's first artist's books. Like many of Aitken's works, this book is a journey. It begins with an atmospheric image of the sun and moves from hazy exteriors to images of unmade beds and lived-in homes. The sequence progresses through images of tire shards, beached ships and a circle of people gathered in the snow to multiple pictures of airplanes suggesting travel. The sequence ends with illuminated urban street signs and empty billboards bathed in vibrant lights devoid of communication. The gritty images at the end of Metallic Sleep are similar to those in Electric Earth (1999), an eight-channel video installation that was on view at the Museum of Contemporary Art in Los Angeles, as part of the recent exhibition of their permanent collection, "Artist's Museum" which ran through January 31, 2011.

Electric Earth is structured around an individual who Aitken imagines as the last person on earth. The narrative follows him as he journeys through an urban landscape as night begins to fall. The banal becomes significant as the dream-inspired images, along with the pulsating soundtrack, turn everyday places into the extraordinary. The narrative is broken into fragments and presented in precisely constructed rooms with floor-to-ceiling projections along a wide, zig-zagging corridor. Viewers traverse the images casting shadows on the walls, becoming entangled in the narrative as the imagery moves from close-up shots of Aitken's main character to the urban LA landscape through which he moves. Many points of view and perspectives are presented simultaneously, requiring viewers to reconstruct the fragments as they move forward and back within the installation space.

Alpha (2005) is one of Aitken's most inventive interventions into the book form. The book was published on the occasion of Aitken's exhibition Ultraworld at the Musee d'Art Moderne de la Ville de Paris in 2005. If his restlessness with the surface of the flat screen led him to create multi-screen works that enveloped spaces, perhaps his boredom with rectangular formats led him to create a non-conventional book. Alpha is bound in shape of a man's head in profile. The narrative that weaves through the book intersperses photographic images and a text written by Aitken that follows the journey of a man (played by actor Udo Kier) who leaves his physical being to embody the architecture that surrounds him. The story within the book unfolds like a film and is made of full-frame bleeds and grids of smaller images, all of which are contained within the shape of this double profile. When the book is open the two faces look out in opposite directions. The die-cut pages are a design anomaly and reinforce the notion that the dream-like story is taking place inside the narrator's head.

Frontier is a small-scale artist's book that accompanied a large-scale installation and performance Aitken presented in Rome in 2009. Frontier was written, directed and shot by Aitken and features the artist Ed Ruscha. Presented on Tiberina Island, curated by Francesco Bonami and backed by the Italian electricity company Enel, this commission flooded a specially built open-air architectural structure with six huge projections. Viewers inside were surrounded by the dynamic imagery and those outside could see fragments of the piece through windows cut into the roofless building. The inside-outside dichotomy was echoed in the film, which starred Ruscha as a traveler absorbed in his own thoughts, who first moves through a desert and then an urban landscape. During the live event, numerous performers echoed the actions in the film. They included musicians singing and playing drums, a cowboy twirling whips and an auctioneer calling out imaginary bids. All this took place simultaneously, making it a live action spectacle. The black and white book reduces the vibrant color imagery in the film to its most graphic details. The book includes both stills from the video and stills from the performance as well as reproductions of reproductions, creating a confluence of mediums all contained within the printed page. The fast-paced sequencing of the book becomes its own film, one whose essence is the disjointed fragments of a dream rather than a cohesive journey.

Like his desire to make a book more than just a sequence of images, Aitken posed the question, 'Can a building become a living, breathing presence?' and set out to prove it was possible with the creation of Sleepwalkers, in 2007. Sleepwalkers commissioned by Creative Time and the Museum of Modern Art, in New York, followed five individuals through a sleepwalking dream state as they moved into an increasingly fictional mindset. Aitken hired well-known and lesser-known actors including Ryan Donowho, Seu Jorge, Chan Marshall (the singer known as Cat Power), Donald Sutherland, and Tilda Swinton and filmed them traversing multiple locations throughout New York City. Although it is clearly nighttime, the actors are awake and go about their routines--showering, dressing, and heading to work using various modes of transportation. The camera focuses on details like the hubcaps on a car and relates that circular motif to a traffic light and the setting sun. Their motions progress from elegiac to increasingly frenetic in accordance with the soundtrack. These overlapping narrative fragments were presented on multiple walls of the museum's building. Viewers were invited to move around MOMA's exterior and inner courtyard marveling at how the projections integrated with the museum's facade, making the building appear to come to life.

Just as Aitken sees each book as having a specific format, sequence and relationship to an installation or film, he sees his site-specific works as being integral to the place where they are shown and often designs elaborate structures through which they are viewed. Migration (2008), a 24-minute film that features animals in hotel rooms, was presented inside 303 Gallery (New York) simultaneously on three billboard-sized screens that dominated the gallery space. The moment (2005), shown at Regen Projects, in LA, was an 11-channel video installation in which flat-screen monitors suspended from the ceiling snaked through the darkened gallery. House (2010) was Aitken's most recent installation. While not specifically a multi-channel fragmented work, it was shown simultaneously on two back-to-back monitors. The video depicts an elderly man and woman seated stoically at a table as the debris of a home being demolished cascades around them. The elderly couple are in fact the artist's parents, and the home being destroyed is Aitken's Venice bungalow. The gallery is littered with debris; remnants from the structure are piled in the corners and the entire floor covered in dirt. At the center of the space is a wooden table with a double-sided monitor and two wooden benches.

Like the audience, who is invited to sit on either side of the table, the couple sits facing each other, their eyes locked on one another's gaze, oblivious and untouched by that which falls to their sides. The bond between them is more powerful than the forces that surround them. As viewers we are situated in the aftermath of the event, but as participants the couple is unaffected. Aitken ends the film by pulling back and showing the shape of the now empty lot. All that remains is the memory of what was once there. House is a single-channel work, and its impact is derived from how Aitken manipulates the surroundings. It is, however, as much about place and space as Aitken's multi-screen installations.

Aitken is not only a gifted filmmaker with an acute sense of composition and a keen eye for the making the ordinary extraordinary, he also makes works that open up critical discourse about the media and the influence technology has on both the built and the natural environment. His work moves from the personal to the universal and often transforms reality into fiction. While Aitken's narratives are purposely fragmentary, meaning is created through an assimilation of disparate elements created by his careful editing and sequencing. The ways in which Aitken sequences an installation are similar to how he sequences a book. Installations are public events, whereas books are intimate private experiences. While the scale of these presentations is drastically different, they often have similar content and can be seen as complementary facets of Aitken's production. Aitken's immersive environments bombard viewers with pulsating music and fragmented imagery that is exquisitely shot and expertly edited. A master of his craft, he has had the luxury of creating installations that fill interior and exterior spaces, bringing the outside in and the inside out.