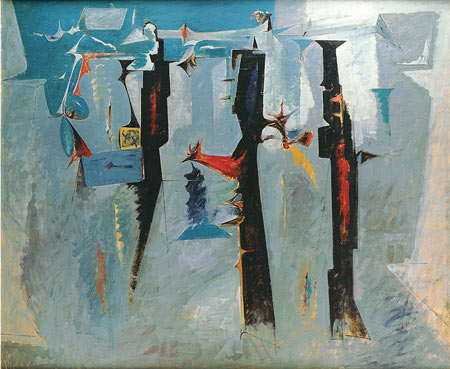 “Zero is to number signs, as the vanishing point is to perspective images, as imaginary money is to money signs. In all three codes, the sign introduced is a sign about signs, a meta-sign, whose meaning is to indicate, via a syntax which arrives with it, the absence of certain other signs.”
- Brian Rotman, Signifying Nothing: The Semiotics of Zero
Stanford, CA: Stanford University Press, 1987, page 1

Perhaps I should call this review “Behind the Vanishing Point” because in fact, what I am going to argue is that once Picasso violated the linear perspective space that had structured Western painting since Brunelleschi — something he began to do around the time of “Les Demoiselles d’Avignon” (1907) — artists were freed to move into new pictorial dimensions, dimensions that were no longer anchored by attachment to the visible world. Liberated from the mimetic dictates of Western realism, artists went behind the visible, behind the signifying system of realism, behind the illusion of three-dimensional space on a two-dimensional surface that was the very stuff of linear perspective. That is, behind the vanishing point.

These artists sought what had often been called “God” - the elusive signifier which lay in “smiling repose” behind the visible world. The transcendental signifier had been represented by a muscular white guy with long flowing beard for Brunelleschi’s contemporaries and, indeed, for millions of people thereafter. But after Picasso, it also was depicted as geometric forms (in Vassily Kandinsky’s compositions) or as a white square (Kasimir Malevich’s Suprematism), or as shimmering cubes of color (Mark Rothko’s Abstract Expressionist masterworks), or as fragile lines on a pale field (Agnes Martin’s late drawings). In popular culture, it was seen as the black monolith in the 1968 film based on Arthur C. Clarke’s “2001: A Space Odyssey.” From Kandinsky (whose book “Concerning the Spiritual in Art” is  now over 100 years old) to Rothko (who made the transition from his Surrealist-inspired mythomorphic paintings to the signature colored cubes in the late 1940s), abstraction was dominated by spiritual devotion, the artistic quest to represent that which lay behind representation.

In the late twentieth century, however, abstract artists began to turn from the pursuit of the transcendental signifier to formal exploration (which is, after all, what Picasso was doing), or to the physical act of painting as an existential assertion, or to simple surface-based decoration. What these diverse approaches share with the spiritual course of Kandinsky et al. is the search for zero signification, the desire to represent nothing.

Precisely because it shuttles between spirituality and nihilism, abstract painting can be difficult and off-putting. It makes demands of the viewer, insisting that they consider the representation of nothing, of no-thing, as a valid practice.

Which is why the art in “Framing Abstraction,” a superb exhibition co-curated by Los Angeles critic Marlena Doctorcyzk-Donohue and famed Northern California art historian Peter Selz, can be so challenging. Donohue and Selz selected twelve artists who are remarkably diverse in age (the Swiss-American Hans Burkhardt was born in 1904 and died in 1994) and nationality (although most work in the US now, Jordi Alcaraz lives in his native Spain and Manfred Müller was born in Germany). Their work, although sharing a generally abstract approach, is even more diverse. The four spectacular Burkhardt paintings in the exhibition recall his time in New York, working alongside Arshile Gorky. Spiky and surreal, they totter between symbolic figuration and elegant formalism. Alcaraz’s works combine painting with drawing (this accomplished with curves of string as well as lines of charcoal) and sculptural use of glass that serves as a sort of “place-holder” for the picture plane and an ironic commentary on the old idea of painting as a window into another, ideal world. Müller’s works here are a revelation. Comprised of thick, heavy paper that is shaped and folded, he creates mute surfaces that imply painting at the same time they insist on their sculptural dimensionality.

Many viewers may be attracted to the more expressive entries — paintings by Kevan Jenson and Naomi Kremer — with their dynamic movement of the surfaces. And surely almost every viewer will be seduced by the sheer beauty of Lita Albuquerque’s four-by-four grid of small canvases of intense red pigment on velvety black backgrounds. As meaning-making animals, we human viewers may wonder if Albuquerque is depicting fiery explosions. Or are they strange astronomical phenomena? Clouds shot through with the last rays of a setting sun? Violent splashes of blood? But the answer is no. The small red and black images do not depict anything. As truly abstract art, they inhabit the pictorial zero behind representation. Signifying no-thing, they suggest the absence of signs, the vanishing point behind space and meaning.