Ed Ruscha
at The Modern Art Museum of Fort Worth, Forth Worth, Texas
Review by Charissa Terranova 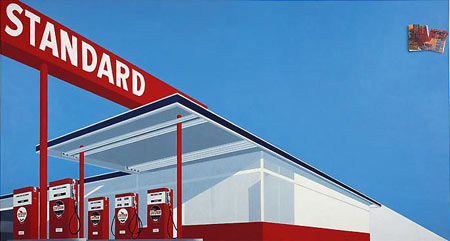 Uniting technology and mental processes, the machine and conceptualism, “Road Tested” is distinctly Ed Ruscha. Instead of straightforward car art, he makes conceptual car art. The distinction lies between the car as a fetish object one looks at and the car as a perceptual device through which one sees and approaches the world. Ruscha’s art books are perhaps the most rarefied distillation of conceptual car art. Along with 75 paintings and photographs, the exhibition includes seven of Ruscha’s extant eighteen art books, including his most recent “On the Road” (2009). “Every Building on the Sunset Strip” (1966) unfolds under plexiglass like an accordion on top of a long podium. To create the photographs in this book, Ruscha attached a motorized camera to the top of his car and photographed the banal architecture along the side of the road. Viewers see a book not so much about the brilliant invention of an artist touting his beliefs about the car and road as a seemingly authorless photographic ledger of a portion of one of the longest and most iconic Boulevards of Los Angeles. The car is naturalized here, so much so we take it for granted. It is at once shaper and connector: framework and synthesizer of the mind, body, road, and urban context.

Ruscha uses the car, like painting, photography, the artist’s book, and film, to mediate and translate: to lay bare the artifice of reality while, at the same time, adding another layer. In “Miracle” (1977), Ruscha directed 28-minute film about a mechanic who subtly metamorphoses into a scientist of the automobile. The film opens onto the grungy and cramped workshop of a mechanic, played by Jim Ganzer, diligently focused on the carburetor of a red ’65 Ford Mustang, much to the anger of his girlfriend played by Michelle Phillips. His workspace gets cleaner and more organized over the film’s 28-minute run, with the mechanic scrutinizing gasoline under a microscope at one point. Yet, at the same time, the mechanic is a lothario of the car. A stand-in for Ganzer’s own eyes, the lens of the camera caresses the surfaces and entrails of the automobile. Close up shots of valves, pistons, bolts, screws, and the exhaust pipe are pornographic in mood. In its polished, Hollywood filmic form, this is a paean to the perverse relationship between one man and his car, between humanity and its machines.  It is a relationship to which many of us can relate.

While the decline of Detroit, crumbling infrastructure, and ever-rising gas prices have diminished the status of the car in the United States, it is nonetheless still a bedrock of American culture and political economy. The majority of Americans commute to work, the driver’s license is the primary form of national identification, and we are willing to fight the occasional war over it.  It is to this automotive matrix that Ruscha’s conceptual car art points, in order not so much to moralize but to remind us of the imbroglio created by our love for and reliance on the car.