The Fisher Collection
SFMOMA makes a home for one of the best modern art collections in the world.
by Christian L. Frock 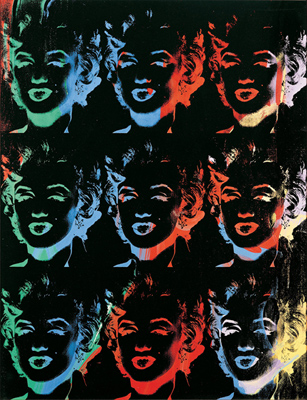 Throughout its brand history, big theatrical productions cum ads for Gap clothing have always been instantly recognizable. Akin to a Broadway musical, they feature a diverse fleet of characters, as they dance and sing to funky classics--one favored example over the years was Bill Wither's "Lovely Day"--dressed head to toe in layer upon layer of Gap tees and denim. The message is simple and affecting: Gap represents the inimitable and free-spirited American style. It is not influenced by fads, but rather is self-confident and built from a foundation of essentials. It comes as no surprise to find that the formidable art collection amassed by Gap founders Doris and the late Don Fisher and recently committed to the San Francisco Museum of Modern Art (SFMOMA) conveys the same values as the brand itself. What may come as a surprise is the vastness of their largess--approximately 1,100 works by 185 artists from 1928 to the present--and the consistently spot-on choices that they made throughout more than 35 years of collecting.

One might also marvel at the nimble speed with which SFMOMA responded to their generosity. Whereas museums generally move at a very slow pace, with exhibitions and publications planned years in advance and leaving little possibility for spontaneity, the exhibition "Calder to Warhol: Introducing the Fisher Collection" was organized and staged within about six months--less than a year after the gift was publicly announced. But this remarkable gesture is in keeping with the open-handed generosity with which the Fishers semi-publicly displayed their collection over the years for employees and their guests throughout Gap headquarters in San Francisco. Longtime supporters of the city and the arts, their philanthropy is a matter of public record on many fronts, including their longstanding involvement with SFMOMA (Don first joined the Board of Trustees in 1983, Doris later joined the Education Committee in 1992) to their civic gift of the iconic waterfront public sculpture Cupid's Span (2002) by Claes Oldenburg and Coosje van Bruggen. In this regard, they have extended the qualitative values of the Gap brand beyond their personal and professional identities and carefully engrained these values within the city of San Francisco itself as a cultural destination--bolstering not only the city's preeminent institution for contemporary art, but also impacting the city's physical landscape with public art. Widely recognized as one of the most important private collections in the world of modern and contemporary art made after 1950, the Fisher Collection takes SFMOMA to higher institutional terrain and has provided leverage for the museum as a serious contender among other world-class institutions, such as the Museum of Modern Art and Tate Modern.

Rather than purchase works from a checklist created by an art consultant--"I'll take one of those and one those and one of these"--the Fishers made their own selections and often acquired wide cross-sections of an artist's oeuvre in order to gain the deepest understanding of their studio practice. When they began collecting in the mid-1970s, they started unconventionally by purchasing entire suites of prints by artists such as Frank Stella and Roy Lichtenstein. As their collection grew, so did the ambition of their vision as they expanded their holdings to include painting, sculpture, photography and video representative of key artistic movements, including Pop Art, Minimalism, Abstraction and Conceptualism. Many of the artists represented in their holdings are collected in such a way as to provide a near complete timeline of their careers, as is the case with Alexander Calder, Chuck Close, Sol LeWitt, and Andy Warhol. Their candor about prioritizing aesthetic value in their collection is especially noteworthy--despite the apparent depth with which they personally engaged with artists and their work, they did not acquire work that was overtly challenging or political. Warhol's Electric Chairs, for example, did not tempt them despite their obvious significance within his body of work.

However the Fishers did not shy away from engaging darker social subtexts when merged with aesthetic beauty, as in the work of Anselm Kiefer, who is represented by an extensive checklist in the collection. Several of Kiefer's massive impasto paintings from 1981-82 commanded their own gallery within the exhibition. Their surfaces clogged with cardboard, straw, and lead, these brooding, tactile works powerfully confronted the viewer with the specter of cultural memory. More recent acquisitions of video works including Shirin Neshat's Passage (2001) and William Kentridge's Preparing the Flute (2005) also draw on these artists' respective attempts to reconcile personal identity with larger cultural histories. Whereas personal taste is the prerogative of the private collector, historic record is the responsibility of the collecting institution. Thus, the onus is now on SFMOMA to engage the works in the collection to tell not only the story of the Fishers and their personal vision as collectors, but also that of the artists' work: a challenge that John Zarobell, SFMOMA Assistant Curator of Painting and Sculpture, refers to as "the age-old dilemma of American museums as 'collections of collections.'" This challenge is further refracted by the presence of other visionary collections within SFMOMA's holdings; some represented by strength in numbers, such as with the nearly 1,100 pieces in the Fisher Collection, and others by strength in focus, as in some smaller collections like the Elise S. Haas collection of thirty-five works by seminal modernists or this year's acquisition of 25 pieces from the conceptual art collection of Count Giuseppe Panza di Biumo.

Beyond the depth of the Fisher's collecting habits, also impressive has been their commitment to works that pose conservation challenges, both in terms of material and scale. To walk through "Calder to Warhol" was to be frankly agog at the number of large-scale works that they acquired, seemingly without concern for limitations such as storage. Indeed, part of the exhibition dominated SFMOMA's recently opened roof garden. Larger-than-life outdoor sculptures such as Louis Bourgeois's Spider (1995) commanded a corner of the terrace, along with works by Calder, Beverly Pepper, and Mark Di Suvero. It is evident that maintaining the integrity of their collection and buying the right work was not limited by logistical restrictions. It is also clear that they recognized their collection as an institution unto itself, suitable for a museum of its own--a notion that required further consideration over the years as the collection grew and long term arrangements for its display became increasingly complicated.

In fact, the Fishers initially considered gifting their collection to SFMOMA in 2006. However the discussion "foundered," in the words of Director Neal Benezra, and instead, the Fishers pursued the possibility of forming their own museum in San Francisco's scenic Presidio, near the original Spanish El Presidio settlement from 1776 and adjacent to the Golden Gate Bridge. But plans for Contemporary Art Museum of the Presidio, or CAMP as they called it, also eventually failed due to lengthy battles with the Presidio Trust concerning objections from the National Park Service and National Trust for Historic Preservation. In July 2009, the Fishers publicly announced that they would abandon their plans for CAMP. At that time, Don Fisher also expressed concern for the fate of his collection in light of his deteriorating health and a desire to secure placement that would guarantee public access to the intact collection, including numerous pieces by the likes of Georg Baselitz, Philip Guston, Ellsworth Kelly, Agnes Martin, Sigmar Polke, Gerhard Richter, Ed Ruscha, Richard Serra, and Cy Twombly along with signature pieces by such influential figures as Carl Andre, Louis Bourgeois, Sophie Calle, Dan Flavin, Donald Judd, and Bruce Nauman, among many others.

Less than three months later--just two days shy of Don Fisher's death on September 27, 2009--it was publicly announced that SFMOMA would receive the collection: an act of generosity that the museum refers to as a "partnership" rather than a gift. Premised on a 100 year renewable loan to the museum, the Doris and Don Fisher Collection will continue to be owned and maintained by The Fisher Trust in a continued collaboration between the Fisher Family and SFMOMA. "Calder to Warhol" presented a perfect opportunity to not only showcase prized selections from the collection, but also to mark SFMOMA's 75th anniversary year and imminent plans for a new architectural expansion to triple the exhibition space of the museum designed by Snohetta (based in Oslo, Norway and New York). "Calder to Warhol: Introducing the Fisher Collection," which concluded in September, offered us a glimpse of the museum's future ambitions. In the meantime, the Fisher Collection will once again remain housed at GAP headquarters until completion of the new wing of the museum (initial designs will be unveiled in 2011) where three quarters of the new 60,000 square feet of gallery space will be dedicated to its display. Much like the Gap ethos, SFMOMA'a future programming will build on foundation pieces that will long outlast fads in true homegrown San Francisco fashion.