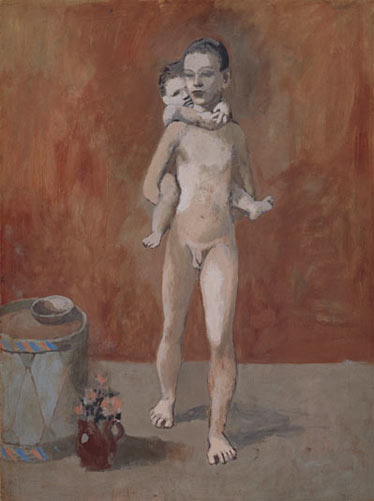 Pablo Picasso’s life was notoriously messy: two wives, numerous lovers, a penchant for political activism (communist), and a tendency to go back and forth between different – even contradictory - artistic styles. Despite its scale, the more than 150 works on view in “Picasso: Masterpieces from the Musée National Picasso, Paris” form a tight show that offers viewers a sense of the non-linear nature of Picasso’s defiantly sprawling production.

Part of what lends coherence to what could easily have been an unwieldy exhibit is the division of the artist’s works into chronological categories. Even so, and perhaps all the more so because of it, viewers are exposed to the give-and-take of ideas: the absolute fruitfulness of a creativity that refused to be structured by set standards. Just when you thought Picasso had moved on to abstraction, “Olga in the Armchair,” a portrait of his first wife, Russian ballerina Olga Khokhlova, is depicted as realistically as if the artist had single-handedly decided to reject any notion of aesthetic progress.

Indeed, the show pays homage to the artist’s distinctly personal valuation of his own production. All of the works have been borrowed from a single museum comprised entirely of works that Picasso held onto throughout his life, and features examples from virtually every period of the artist’s life. Its manifestation in Seattle (along with Saint Petersburg and Helsinki) is due to some very unusual circumstances, namely the temporary closing of the Musée National Picasso during a 28 million dollar renovation to be completed in 2012. Its appearance in Seattle represents the first major Picasso survey to ever appear in the Northwest and, once the renovation of the Musée is completed, one not likely to be repeated anytime soon.

In spite of the enormous wealth of works in vastly different mediums, there are some notable absences: “Les Demoiselles d’Avignon” (although present in spirit via a number of small studies), the keystone image of Cubism and 20th century modernism, and “Guernica,” Picasso’s seminal anti-war painting created in response to the German and Italian bombing of the Basque city during the Spanish Civil War. For every omission however, there are wonderfully fresh inclusions. For example the horrific “Massacre in Korea,” an expressionistic painting from 1951 created as a critique of American intervention into Korea’s conflict, is one of the highlights of the exhibition.

A number of the galleries are embellished with well-known quotes from the painter. Some are inflammatory: “Art is not made to decorate rooms. It is an offensive and defensive weapon.” Others are contradictory: “Art is the lie that makes us realize the truth.” And then there’s that zinger from the artist provocateur who placed art and religion on equal planes: “God is really only another artist. He invented the giraffe, the elephant and the cat. He has no real style. He just goes on trying other things.”

There’s no logic – at least not in the conventional sense - to be made of the artist’s oeuvre. Even when viewed within these regimented confines, the overlapping styles, the borrowing from various cultures and the artist’s outrageously fertile imagination, refuse to adhere to any architectural compartmentalization. However, there’s tremendous joy and inspiration to be had in wandering the often-circuitous path of one artist’s remarkably multi-faceted vision.