The Crocker Expands into the 21st Century
Report from Sacramento
by David M. Roth 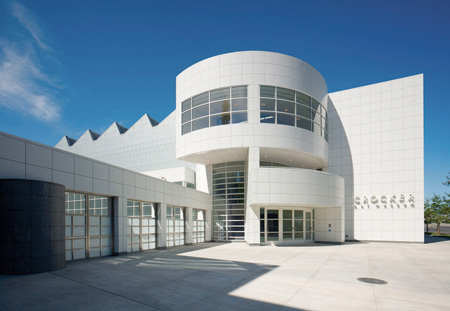 Against a backdrop of stalled urban renewal projects and a paralyzed state legislature, Sacramento's tripled-in-size Crocker Art Museum stands out like the nuggets that once shone from nearby riverbanks. This high modernist, $100 million addition to "the oldest continuously operating art museum in the West" opened on October 10, marking the institution's 125th anniversary. It comes after three years of construction and more than a decade of planning and fundraising from public and private sources. Designed by the late Charles Gwathmey of New York-based Gwathmey Siegel & Associates, the all-new Crocker represents the realization of several dreams. The first was to create a compelling (but not overly ostentatious) building to showcase the museum's fast-growing collection. The second was to integrate the Italianate-Victorian mansion that has housed the museum's collection since its inception in 1885 into the new design. The result is an understated architectural masterpiece, one capable of displaying more of the museum's permanent collection than has ever been seen at one time--and, of attracting blockbuster shows imported from afar. "I think of the building as an icon of the new Sacramento," says Director Lial Jones. "It's a great new treasure for the city and for this region."

Opening exhibitions include a selection of over 50 paintings and drawings from Wayne Thiebaud, timed to coincide with the Sacramento Pop artist's 90th birthday; a show of 125 pledged and donated historic and contemporary works; 56 master drawings from the museum's collection; and the US debut of the Sidney Swidler collection of 20th-century ceramics. December and January bring exhibitions from Color-Field/stain painter Paul Jenkins and a display of boundary-stretching photographs and paintings from Gottfried Helnwein. In all, the museum has announced a total of 18 exhibitions running through 2013.

In general, programming will not shift course. "It will continue to track our core strengths," says Chief Curator Scott Shields. Those include: drawings and prints; Flemish, Dutch, Central European and Italian art from the 16th to the 19th centuries; American Impressionism; early and contemporary California art; international ceramics; and art from Asia, Africa and Oceania. What will change, says Shields is that "we will be able to display about 20 percent of the collection, compared with about four percent before," putting the Crocker above the 15 percent average for most major U.S. museums. "We'll also be able to attract traveling exhibitions from museums that would never have considered us before because of our space, storage and security limitations."

Evidence of that potential may not be readily apparent to commuters zipping by on Interstate 5, which flanks the museum on its west side, just blocks from the Sacramento River. The structure, from the outside, seems relatively compact. But appearances are deceiving. The differences, between old and new, both inside and out, couldn't be more pronounced. Whereas the original building erected by Judge Edwin B. and Margaret Crocker represented the height of Victorian grandeur, the new Crocker, which boasts 125,000 square feet of new exhibition space and a quadrupling of space for traveling exhibitions, is a study in understated elegance and a welcome antidote to the glut of so-called "art cathedrals."

Sleek, curving exterior lines, glassed-in cylindrical porticoes (echoing Victorian-era cupolas), an exterior sheathing of aluminum and zinc panels (reminiscent of Agnes Martin's minimalist grid paintings), and a saw-tooth roof, whose clear panels let natural light stream into galleries, are among the building's most prominent features. When you enter building's clerestory-style atrium and move into its expansive public space and then head upstairs to three floors of galleries, the museum's tagline, "built from the inside out," acquires meaning. Look through the lobby's floor-to-ceiling window, past a courtyard big enough to seat 1,200, and you see a fractured, Hockney-like view of the old Crocker, now restored to its original luster. Throughout, there's an abundance of space and light, but nowhere is it more dramatic than in the early California gallery, where monumental works from Charles Nahl, William Keith and Thomas Hill, set against navy-blue walls, seem to almost leap from their gilded frames.

Lest anyone think the Crocker is simply recycling familiar themes at a larger scale, Shields points out that during the past ten years the museum acquired, either through purchase or donation, some 4,000 new works of art whose value he estimates at between $25 to $50 million. The list of contemporary works on display at the opening exhibition reads like a "Who's Who" of Northern California art in the post-WWII era. Bruce Nauman, Richard Diebenkorn, Manuel Neri, Joan Brown, Viola Frey, Peter Voulkos and Stephen De Staebler are but a few of the artists represented. Given that the Crocker is the only major museum on the I-80 corridor between San Francisco and Reno, it's safe to say that its 21st-century reincarnation will be a game-changing cultural event. "What we really want to do right now," says Jones, "is let the people of this region see the depth and breadth of this collection."