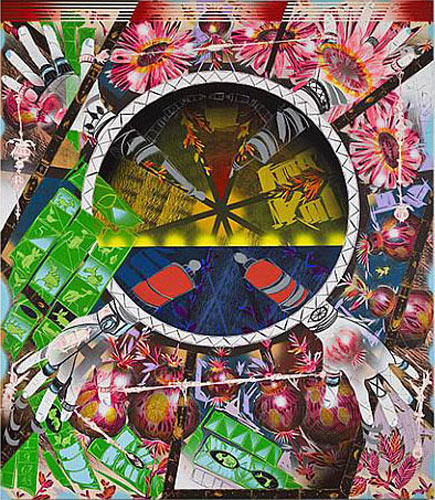 When Immanuel Kant wrote that aesthetics involved  ‘disinterested pleasure’ he bred what is a mistaken suspicion for beautiful form on two counts — pleasure and interest. Flagrant (that is too say, female, gay, primitive) pleasure is a dangerous and spontaneous force in a (still) masculinist society that dictates desire’s boundaries, subjects, objects, normalcy, arenas of delight or prurience. As for disinterest, well, in mostly patriarchal capitalist and for  that matter socialist (faux) utopias, the  absence of interest is equally dangerous, since vested interest means commitment to the ideological flavor of the day — and you need to be vested to get your way.

Enter Larry Pittman. There is not much left to say about Pittman that has not been penned; he is indeed an elder statesperson of art in L.A. Numerous of reviews have been written, most recently an interview reminding us how deep this ‘disinterested pleasure’ runs for Pittman — he decorated the dinner dishes with his mother’s jewels.

Now that is just the kind of delight in the senses that scares those who would control the contours of pleasure, and those who feel footless, out of control when such pleasure — not its simulation — wells up. When you engage a Pittman painting, you are awash in this, you cannot help yourself and you are likely to dig it.

The idealist in me wants to read Kant as referring to some small amorphous irrepressible spark of creative free will left courageously intact – like an engine in low idle — even in the wake of the ingrained grand narratives and advertising that molds us. This is what draws one to a Pittman surface. I want to imagine this creative free will sitting untouched somewhere alongside our undeniably media constructed selves and group identities. It pulls us along on sheer reflex, on optics, on the basis of some inexplicably visceral and psychic awe strong enough to hold us there, suspended for a beat outside of quotidian and worldly interests. And it does so just long enough to let the vested take shape: as memory, as biography, as repressed or conscious longing, as cultural semiotics, as narrative.

Enter Pittman once again. His level of disciplined hand skill, his ability to create from what feels to a viewer like a contest between steely skill and wild intuition continues, after thirty years, to be so technically assiduous, richly odd, funny, seductive, horrifying and ultimately pleasurable in turn that you cannot look away, even for those trained that surface is the vapid seducer.

Pittman’s  virtuoso complexities of space and depth look here like Renaissance sfumato in day-glo. They resemble the spaces you get from airbrushing black velvet. They employ subtleties of edge and light, of figure-against-abstraction to reel us in through disinterested visual pleasure in the best senses of those words. Remarkably, he does not draw or plan, and paints these dizzying scenes’ complexities with n o outside help. Pittman makes stunningly flamboyant works filled with a dangerous beauty that never rehearses clichéd camp but in fact convinces even the biggest doubter that sense and sensibility cannot be spliced.

All the works are untitled, which abets the idea that you are first and foremost brought into this complex psychological terrain from form. Canvases are chock-full of colliding diamond patterns, petals, faux frames held up by odd linear ribbons, Japanese lacquered curios, reaching hands, baubles that look like fecund gourds or Christmas bulbs, and many, many views of blue bejeweled feet that suggest Krishna – a Hindu deity in whom and for whom disinterested, i.e. innocent sensuality represents the highest form of union with the sacred.

Parallel histories are worked into these canvases: social history in pop icons of maleness and kitsch décor raised to high art; art’s history in Pittman’s inventive extensions of  surrealism, as tendrils sprout what might be luscious thorns; or ‘cities’ seen though mandalas that appear ablaze in distant neon light. Pittman also packs in references to his ethnic heritage. Of Columbian and Italian descent, and having co-resided for decades in Mexico, the works convey a jaunty sampling of the folkish, the artisanal and the exotic that extends beyond touristic or hierarchic quotes.

Pittman relishes those moments in which longing hurts good. More importantly there is a way that he permits this ether to belong not just to him but to ‘one.’ I sat in the gallery listening to viewer after viewer find bits of a supercharged nostalgic past or desire in this passage or that, and talk about same with this wistful, entranced kind of longing that made Proust’s remembrances of things past seem very, very tame.