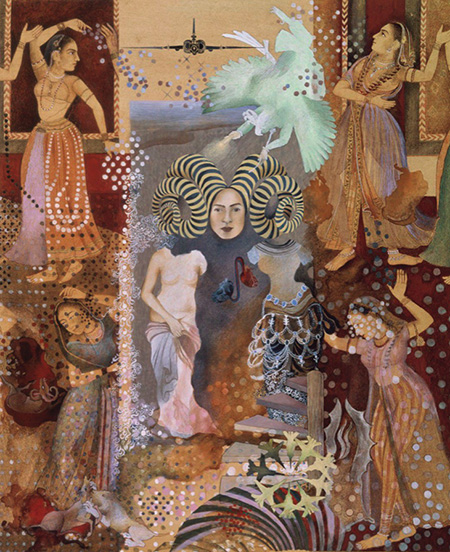 Shahzia Sikander presents some 60 paintings, drawings, and video animations created between 1995 and 2010 under the title “Extraordinary Realities.” They reveal how Sikander combines Hindu, Muslim, and Western imagery, injecting her fusion with humor, ambiguity, and eroticism. She spent years perfecting her traditional miniature painting techniques before using them as a springboard for cutting-edge work that has helped bring the genre into the 21st century.

Born in Lahore in 1969, Sikander studied Indo-Persian miniature painting at Pakistan’s National College of Arts, graduating in 1991. In her thesis project, “The Scroll,” she experimented with the genre, demonstrating its potential relevance to contemporary art by deconstructing and transforming it. “Extraordinary Realities” was organized by the Rhode Island School of Design, where the Pakistani-American artist earned her MFA in 1995. While at RISD, she developed her personal vocabulary and began addressing gender issues as well as race and class structure, sexuality and identity. Sikander’s connection to Houston began in the Core Residency Program at the Museum of Fine Arts, Houston, where she was a Fellow from 1995 to 1997. At the conclusion of her fellowship, the artist moved to New York, where she lives today.

The show opens with a large floor-to-ceiling installation of translucent paper hung in separated rows; this introduces Sikander’s technique of layering, a key element in her work. The layering of images and details becomes a metaphor for her shifting perspective of the world. This layering technique is embodied in the artist’s references to the Muslim veil and burka, both an integral part of her religious history and cultural identity. In “Who’s Veiled Anyway?”, a figure on a horse turns out to be a male polo player, a common figure in South and Central Asian manuscript painting. Sikander covers him with chalky white lines that suggest a burka, thereby partially obscuring his masculinity.

As an independent foreign-born, well-educated and progressive woman, the artist constantly infuses Western stereotypes with subtle feminist messages. In “Hood’s Red Rider” she reimagines Cinderella as a veiled yet powerful Red Riding Hood, commenting (on the wall label) that European fairy tales were part of her childhood. “I wanted to make female protagonists who were proactive, playful, confident, intelligent, and connected to the past in imaginative ways.” Cinderella’s prince takes center stage, while Red Riding Hood floats above him, her multiple arms wielding weapons of power like a Hindu was goddess.

After living through 9/11 in New York City, Sikander’s work became more overtly political. She includes a fighter jet in “Pleasure Pillars,” and below it has added a winged creature shooting fire from one hand. East meets West in the central figures — a Roman-inspired Venus on the left and a Southeast Asian celestial dancer on the right. Sikander adds a self-portrait in ram’s horns above them both, as well as four additional dancers in the corners. Architectural elements give structure to the painting, while assorted dots, stripes, and other patterns flatten the picture plane. A combination of conventional perspective with flattened areas can be disorienting, but the artist risks that in order to circumvent facile interpretation. Although traditional miniature paintings often focus on religious themes, scenes of court life and domestic life, Sikander prefers to avoid narratives that can be easily understood and dismissed. In her long ongoing series, “The Scroll,” she brings a fresh approach to a traditional format. Her early master’s thesis version depicts her home when she was a teenager as a series of segmented rooms. Sikander appears as a floating ghost-like image that, in her words, “reflects the restlessness of youth, the quest for identity, and the claiming of freedom for the female body in a domestic setting.”

The show concludes with “Parallax,” a 15-minute animated video described as “an extended meditation on the ebb and flow of cultures and histories localized at the Strait of Hormuz.” As much as one-quarter of the world’s liquefied natural gas and oil pass through the strait, and in her video, Sikander addresses its effect on colonialism and capitalism.

Layers of music and the spoken word underscore the themes of oil extraction, the migration of birds, and climate change. Bird-like forms coalesce into oceans covered with oil in a mesmerizing display constructed from hundreds of drawings, watercolors, and animation cels.

Sikander transforms and subverts the illustrational tradition of manuscript painting to comment on the cultural and sociopolitical beliefs of a global society in constant flux. She uses the Muslim veil and the Hindu multi-armed goddess in a single painting, thereby referencing the intertwined histories of India and Pakistan. She blends eastern and western references with traditional miniature painting and contemporary aesthetics to address a stimulating range of subject matter, including imperialism, colonialism, economics, sexism and identity.