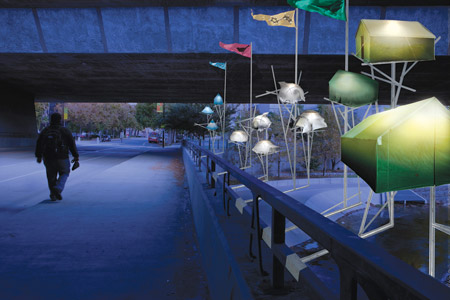 In 2000, ZER01 was established in San Jose, California, to aid the exploration of the intersection between technology, digital culture, and art--a fitting endeavor to highlight the abundant progressive talent of Silicon Valley. Six years later, the organization's first SJ01 Biennial took place in conjunction with the International Society for Electronic Arts (ISEA); it was followed two years later by a slightly bigger event. This year, celebrating ZER01's tenth anniversary, the SJ01 Biennial will be larger and more ambitious than ever. Over two hundred participants from a wide array of disciplines--artists, musicians, programmers, academics, architects, engineers, scientists, designers--from over twenty-two countries will be showing work in numerous venues throughout San Jose; there are also several public art installations.

Among what will be created are forty-six pieces commissioned specifically for this event (compared to the nineteen commissioned for the 2008 biennial). This highlights a unique aspect of this event as well as the ZER01 model: it's enormously collaborative. Most of the commissions and many other aspects of the event are the result of working with organizations from around the world. This isn't only a way of forging new ideas by bringing together diverse skills, it's also an exploration of creating relationships and community. The event takes place officially September 16Ð19, but most of the art is on view before and beyond those dates; there are also numerous affiliated shows in the Bay Area taking place around that time.

New this year is a central theme: Build Your Own World. "The idea is to look to the future," says ZER01 Executive Director Joel Slayton. "Examine doing something today that will make a difference tomorrow--being critical and proactive." Numerous complex problems are addressed in edgy, provocative, and highly imaginative ways: transportation, food creation and distribution, housing, eco-technology, and even entertainment are all topics of consideration. Biennial Assistant Curator Jaime Austin also points out that many pieces are aimed at demystifying technology--using creative and often fun ways to demonstrate complicated concepts.

The theme was also the focus of the newly formed curatorial committee. As in years past, exhibitions will take place at numerous art and culture venues around San Jose. This year, representatives from the co-hosting organizations--Anno Domini, MACLA/Movimiento de Arte y Cultura Latino Americana, San Jose Institute of Contemporary Art, San Jose Museum of Art, San Jose Museum of Quilts and Textiles--collaborated to create a more cohesive vision. The City of San Jose Public Art Program also commissioned numerous public art works along the San Fernando Corridor based on the biennial's theme.

The signature exhibition, which will be held in South Hall and feature thirty projects by eighty-six artists (several projects are created by groups of artists), is ZER01's "Out of the Garage, Into the World." The biennial has used this space before, but never to this capacity. This year, the artists will take over the entire 80,000 square feet available and build their projects, some of which are massive, at the same time. Austin points out that there will be no structure in the space before the artists move in--no walls and no predetermined space allocation; only a general layout will exist. "It's a large-scale experiment to see how it all comes together," says Austin. "The artists are really excited."

Construction begins almost two weeks before the official opening of the event (from September 4Ð14), and the public is welcome to come observe the process and, in several cases, participate. "One group [MTAA] is literally doing a barn raising," says Austin. "They'll be using volunteers." She goes on to explain that decisions about the barn itself, from materials to layout, will also be crowd-sourced. Another massive endeavor will be Empire Drive-In, by Todd Chandler and Jeff Stark, which will recreate a drive-in movie theater out of salvaged cars and other materials. It will also serve as the screening area for the 01SJ Future Films program that will feature short films, features, revivals, and live cinema events. And, yes, audience members will be able to sit inside the cars to view the films.

In addition to the exhibitions, there is the new Green Prix parade--which is focused on sustainable transportation and is open to public participation; performances; participation-based projects focused on the idea of Play; the ZER01 Global Warning symposium; artists' talks; film screenings--the opportunities are fantastic. "The idea is to introduce platforms," says Slayton, "such as the Green Prix, that will be built into the fabric of future biennials; creating a set of initiative to build on." This falls in line with another message ZER01 wants this event to send--that it's here to stay.

"We've been taking small steps," Slayton continues, "building over the last decade. This year marks a moment of transition to ZER01 becoming a year-round organization that's international in scope, an ongoing think tank. We always want to work both from the inside out and outside in--we bring out the best of what our area has to offer and we bring in the very best from around the world. It's a way to create a there there, to highlight the very best of what the Silicon Valley has to offer. We have the ability and responsibility to create an international cultural stage that reflects the innovative capabilities our region is known for."