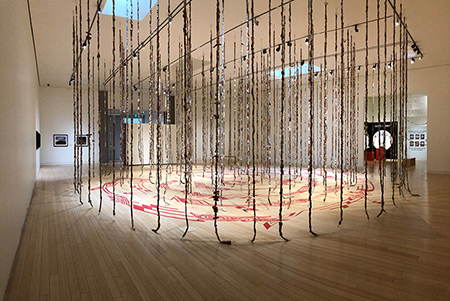 Strands of unfired clay beads hang suspended in a circular form, each one symbolizing a person who died in the southwest borderlands during a period spanning more than two decades. Many were created by individuals across the U.S., Canada and Mexico whose fist imprints on the clay serve as acts of remembrance for those who’ve lost their lives. The beads illuminate the magnitude of death within the borderlands, something that’s difficult to comprehend when confronted with only statistics or the politics of marginalization and denial.

More than 7,000 of these beads define “Something to Hold Onto,” a site-specific installation by multidisciplinary artist Cannupa Hanska Luger (Madan, Hidatsa, Arikara, Lakota, European). He’s based in New Mexico, where his practice includes performance, political action, and multiple mediums such as ceramics, fiber, steel, sound and new media. “Something to Hold Onto” is a continuation of the artist’s focus on contemporary indigeneity, in part by collaborating with several artists working in the region. In political terms, the installation critiques the ways capitalism and colonialism disrupt indigenous sovereignty and kinship, while it embraces a way of being that’s grounded in sharing land and knowledge.

“Something to Hold Onto” is the second social engagement work in Luger’s “Counting Coup” series, launched in 2018. The installation’s red floor mural, created by Phoenix-based artists Thomas “Breeze” Marcus (Tohono O’odham) and Dwayne Manuel (Onk Akimel O’odham), is inspired by a Tohono O’odham creation myth. It’s a visualization of a story called “The Man in the Maze.” Its design, which Luger mirrored in hanging his strings of beads, provides a pathway for those who choose to enter the installation and walk within its physical and conceptual space. Here, movement becomes a meditation on the indigenous peoples whose lands are occupied by colonizers and the perils of border-driven ideologies.

The lines prevalent in “Something to Hold Onto,” which anchors the “Passage” exhibition, allude to borders as arbitrary and artificial lines that disrupt freedom of movement, even as they suggest the ways collective actions can counter oppression and create solidarity. In addition, the work prompts reflection on the movement of water, and the ways border policies impact animal habitats, climate change, and environmental justice.

The exhibition also includes seven borderland images by Phoenix-based photographer Thosh Collins (Onk Akimel O’odham/Haudenosaunee), whose work demands that people who enshrine concepts of otherness see the region as more than a political talking point. In an adjacent gallery, Los Angeles-based artist Tanya Aguiñiga (Mexican) has created a mutual aid pop-up with six stations where people can donate goods for vulnerable migrants, such as babies and LGBTQ individuals. Visitors can take 16 postcards from a wall-mounted display, where topics include immigration-related books, statistics and support organizations. A line mirroring a section of the U.S.-Mexico border runs across a gallery wall, where red dots representing migrant deaths are most prevalent on Tohono O’odham land in Arizona. This isn’t art for art’s sake. It’s art for action’s sake.

These collaborators elevate Luger’s notion of art as a verb rather than a noun, showing the ways artists as activists engage community members to effect change. The exhibition is particularly poignant when considered in the context of current events, including the parade of American politicians along the U.S.-Mexico border and the recent discovery of mass burial sites at former boarding schools for indigenous children in Western Canada (see the New York Times, June 7, 2021, [https://www.nytimes.com/2021/06/07/world/canada/mass-graves-residential-schools.html]. Luger and his fellow artists call on those who enter the exhibition space to leave it changed, not only in how they think about migration, indigeneity and borders, but also in how they might act to co-create more justice in the borderlands and beyond.