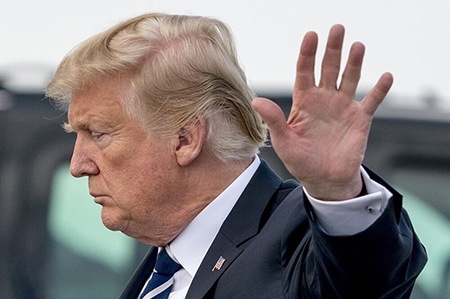 Hopefully this will be the last column I ever write about Donald J. Trump. Generally I don’t write about politics, because 1) I much prefer writing about aesthetics, and 2) I think people are set in their ways and will go on believing what they believe no matter how cogently I might try to convince them otherwise. But every four years when the presidential elections roll around I weigh in. This is my third commentary this season, and I pray to Zeus, Gaia, Yahweh and Shiva it will be the final time I have cause to consider the bottomless vat of infantile narcissism who has disgraced this nation on the global stage for the past four years.

It was always the small things that goaded me most about Trump. The fact that he never attended the Kennedy Center Honors, betraying his utter disinterest in the creative and performing arts. The fact that he boycotted the White House Correspondents’ Dinner because he lacks the sense of humor to engage in some gentle mutual roasting with the people who cover his presidency. The fact that he never dined at any restaurant in Washington, D.C., besides the steakhouse in his own hotel. Obviously this is a man who has a big appetite, but not for variety, not even extending to his host city’s vibrant culinary scene. This was all in keeping with his underlying lack of intellectual curiosity. Inquisitive minds have adventurous palettes; small minds stick to the tried and true. Trump isn’t inquisitive, which is why he doesn’t like intelligence briefings and doesn’t read. I’ll also be glad not to see on a daily basis his poorly tailored sack-suits and the conspicuously over-long necktie hanging inches below the beltline, evidently another of his attempts to assure the world he has a big dick.

There were, ahem, bigger things that soured me on Trump. I have always taken it personally when, borrowing from Lenin and Stalin, he persistently labels the free press “the enemy of the people,” then feigns outrage when asked tough questions. Having worked since 1990 variously as a newswriter, editor, reporter, anchor, critic and essayist in radio, broadcast, cable, print and online media, I take extraordinary exception to this brazen assault on journalism and its appropriate role as a watchdog that exposes corruption, advocates for truth. To invoke Finley Peter Dunne’s reference to Eleanor Roosevelt, a free press’ role is to comfort the afflicted and afflict the comfortable. When the President branded the established news media as “fake news” while elevating actual fake news outlets such as Breibart and internet conspiracy theorists into the realm of legitimacy, it was one of his earliest Orwellian inversions. It was also spectacularly successful in gaslighting tens of millions of Americans. In his universe, fair is foul and foul is fair.

Another aspect that has hit me more personally is his strategic misrepresentation and misappropriation of my home city, Portland. I was deeply worried all the way back in late May that the riots, looting, and vandalism that have happened here in the late-night hours after our Black Lives Matter protests have ended, would be weaponized by the Trump campaign to stoke fear and racial resentment among Republican voters. That is exactly what happened, as the President, the G.O.P., and their armies of online propagandists singled out Portland as the poster child for the “anarchy” ostensibly metastasizing from bad, liberal Portland into good, wholesome Main Street U.S.A.

“Make no mistake,” Trump intoned on August 27 as he accepted the Republican nomination on the south lawn of the White House in violation of the Hatch Act, “if you give power to Joe Biden, the radical left will defund police departments all across America. They will pass federal legislation to reduce law enforcement nationwide. They will make every city look like Democrat-run Portland, Oregon.” Now, I’m not going to pretend that what’s going on in Portland is not complicated. On one hand, BLM protests have shown the world our progressive stripes and determination to call out systemic racism. But opportunists and hoodlums unaffiliated with B.L.M. have run amok in the witching hours long after the protests are finished, vandalizing local businesses and turning parts of our downtown into an unsavory tableau of boarded-up stores, defaced public and private property, and toppled statues, including one of Abraham Lincoln. Ask two Portlanders what they think of what’s happening here and you’ll probably get three answers. But we’re a sturdy city, and we can handle this. What we didn’t need in the midst of our soul-searching was an infusion of federal agents inflaming tensions and playing into Trump’s calculation of using Portland to stoke a “law-and-order” versus lefty/anarchist culture war that would distract voters from his catastrophic bungling of the coronavirus response. That strategy worked on a lot of people (I received several concerned calls and emails over the summer from friends in the Midwest and South who asked me if I was safe in a city overrun by anarchists). Fortunately it wasn’t enough to save Trump from electoral doom.

On the topic of Portland, as someone who’s lived in this progressive city for twenty years, working and socializing in the art world (a subculture within a subculture!), it’s no surprise that most of my social-media followers are Democrats. However, I know Republicans, too. I grew up in the South, and in my teenage years I went to high school on a U.S. air base in Germany. In my senior year (1988) I won a speech contest sponsored by the Veterans of Foreign Wars and was promptly whisked off to Washington to shake hands with none other than Ronald Wilson Reagan. I know a lot of people with the kind of conservative patriotic values that are too often stereotyped by my liberal friends.

I was curious whether they would speak up if and when they read my anti-Trump writings. While some tactfully held their tongues, one made his pro-Trump point with good humor; others chimed in more heatedly and told me why they thought I was wrong. A few conceded that yes, Trump is boorish and louche, but felt it was still worth supporting him for reasons X, Y, and Z. Some took it farther and insulted Biden, deploying the standard Fox News talking points. One person I’ve known and considered a dear friend for three decades took it to the level of a scathing personal attack, not only against Biden but also against myself for supporting him.

These varied responses brought home to me the quandaries that our partisan entrenchments have inflicted on our social and familial life during this era of politics as a zero-sum game. Americans have always had big mouths and a pugilistic streak. We like spraying our opinions far and wide and scrapping with those who disagree. The modesty, reserve, decorum and nuance that are second nature to people in many cultures around the world is not our default setting. In many ways our rough-and-tumble, argumentative natures have served well the project of a garulous, impassioned populace in which political disagreements enhance a rich democratic roux. But something has changed in the arena of ideas, and Trump has kicked it into hyperspace. Agreeing to disagree borders on a lost art. Political difference has become tantamount to personal animus. It seems an epoch ago when George H.W. Bush and the man who denied him a second term, Bill Clinton, became pals despite major philosophical divides. When Bush died in late 2018, Clinton recounted their friendship in a moving essay for The Washington Post. [https://www.washingtonpost.com/opinions/bill-clinton-george-hw-bushs-oval-office-note-to-me-revealed-the-heart-of-who-he-was/2018/12/01/e32966de-f56e-11e8-80d0-f7e1948d55f4_story.html]

Will the Biden/Harris era usher in a return to a more civil discourse, or is Trump’s damage lasting? For that matter, will Trump leave the White House without being restrained and removed in a straightjacket, or will he stomp his foot and bellow, “If I can’t have it, nobody can!” before summoning the nuclear football and blowing us all up out of spite? I wish that were an outrageous, beyond-the-pale proposition rather than a possibility. I think I speak for many when I say January 20 — make that January 21 — can’t come quickly enough. Untill then, buckle up and hold tight. This ride ain’t over yet.