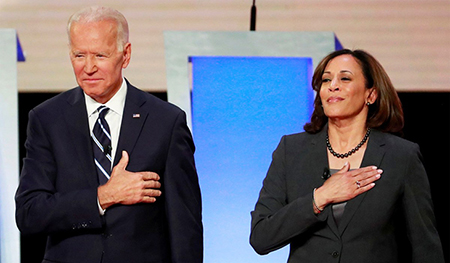 We endorse Joseph R. Biden for President. The case for his candidacy has been made in the glare of public klieg lights, ad nauseum and in ALL CAPS every day for four years and in a thousand different ways by his opponent. The current president is the fifth deadly threat to the republic that Dr. Franklin and his cohort bequeathed to us, following monarchy, slavery, fascism and communism. To vote for the incumbent you can either be pleased with the prospect of an America that more closely resembles Russia or North Korea (replete with political prisoners and forced labor) than the good old USA; or you have been brainwashed by his laughably brazen propaganda. Many independent and conservative leaders and voters get this and will be part of this election’s tectonic shift, the referendum of rejection. The cake has been baked, the jello is jiggling. Certainly there are millions of otherwise good Americans who will not be swayed from their passive complicity with the truly dedicated basketful of deplorables. All evidence to the contrary, the active support of otherwise very fine people, for a man and party that have been fleecing that base more thoroughly than any other group in the country, is and will remain resolute. We will not waste our pixels on trying to convince them of their folly. Nor should we rescue them from it.

There is a concurrent wave that has been building throughout these last four years, and its energy has risen to tidal force visibility. In these final days before November 3rd it will not dissipate, we are past that point. The policy and moral debate concluded some time ago. The power of deterrence, disinformation and dirty tricks constitute today’s Republican Party arsenal. The tools of voter suppression are not merely their strongest suit; it is their only suit. Legislation in Mitch McConnell’s Senate by now consists of a single agenda item, to politicize the nation’s courts. Beneath their polite Brooks Brothers layer hides a smallpox infested nakedness. They are stark in their corrupt lust for power über alles. They have progressed far beyond an ideology of small government; the notion of public service is opposed as actively as monarchy, fascism and communism were in a sepia-toned era. Just as slavery negated any legitimate claim that the ante-bellum South was “civilized,” Trumpism negates any claim of democratic leadership. We will begin the reclamation project on January 20, 2021. It will not be easy.

These four years have been our antinomian time, a time in which the rule of law has been rejected and moral, religious and social norms are dispensed with in the name of “winning,” and as such only on behalf of one man. The world America created after Germany and Japan attempted to brutalize everyone else into a peace of absolute submission has not evaporated, but it has been placed on the brink. We now know that it will go over the brink if given another four years to continue dismantling it. So vote … and be prepared for the heavy lifting that must follow.

A recitation of the man and his party’s depravity is unnecessary; the lists are everywhere. Fresh documentation appears daily because fresh offense is rendered routinely, each new affront rendering the national landscape just a bit more uninhabitable. We’ve read about such a land, far away and so unlike ours as to evoke our sympathy and our charity. So who will rescue us? What force will arrive at our beaches to drive our occupiers from their pillboxes to their Führerbunkers?

This November 3rd is our generation’s D-Day. It is our good fortune that the beaches are metaphorical and that our cities have not been reduced to the rubble out of which Europe spent decades rebuilding. Joe Biden’s election is the essential starting point, but of less importance than the moral and political renewal that must follow from it. Thank goodness his calm and empathic nature is here for us right now, at this moment in which the voice of reason must cleanse us of the moral filth and civic wreckage. Let us therefore begin with the election of Joe Biden as President and Kamala Harris as Vice President of these United States, the world’s original democratic republic.