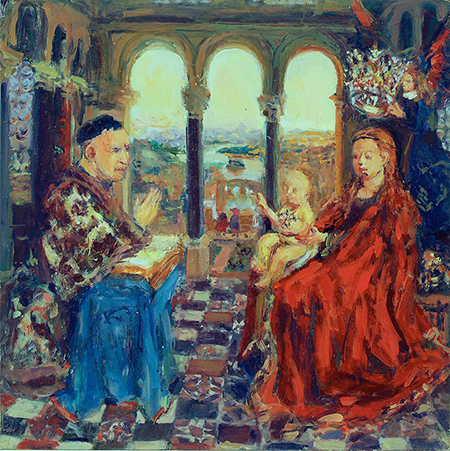 For a variety of reasons these three artists — Ann Leda Shapiro, Carol Adelman and Patrice Tullai — all maintain committed full-time studio practices, but rarely show in galleries, do not have agents, and work in both physical and geographical isolation. Yet they are among the most unusual and accomplished artists I have ever encountered.

All three choose to rely on online sites for their sales and on interior, personal issues to drive their aesthetic purpose, which is fueled in each case by considerable ability. Collectors, dealers and even most critics’ responses do not interest them; they work for a small circle of intimate friends and the community where they live. In Tullai’s case, her audience includes a cohort of fellow West Coast and Los Angeles rock musicians (she was part of Pretty Mary Sunshine). Shapiro maintains an acupuncture practice that connects her to appreciative New Age neighbors.

Tullai and Shapiro live in rural areas, an island in the case of Shapiro. Within Puget Sound, islands tend to nurture inward-looking populations, eager to support one another’s farm products — or in her case, paintings. While galleries exist there, they are open only sporadically and indifferent to the art market.

After attending the San Francisco Art Institute (BFA, 1969) and UC Davis (MFA, 1971), Shapiro experienced a mini-revival a few years ago when the Seattle Art Museum acquired two of her paintings, including “Two Sides of Myself,” which was censored and removed from her solo debut at the Whitney Museum of American Art in 1973. Initially associated with and encouraged by the feminist movement, Shapiro’s art trended away from Judy Chicago’s abstract genitalia, instead creating a universe of bi-gendered individuals floating in space like astronauts.

Cross-sections of their bodies reveal double sets of genitalia, anticipating the emergence of transgender artists during the past decade. With her science fiction tableaux, Shapiro echoes and parallels African-American artists and writers such as Robert Pruitt and Olivia E. Butler, who created, respectively, artistic and literary fantasy worlds of escape and pride that exist quite separately from the oppressive Planet Earth. This may also be  the point of Shapiro’s ambiguously gendered spacemen and spacewomen. In both cases, Shapiro and her black colleagues are fleeing a hopeless world of oppression, discrimination and authoritarian rule. Eerie and colorful, her work is equally compelling and disturbing.

After Adelman was educated at Carnegie Mellon University and University of Washington, she assumed teaching positions at Louisiana State University (2001-2002) and Dickinson College (2003-2004), before accepting a visiting lecturer position at the University of Washington in 2008. Rejecting abstraction, Adelman earlier spent time in Washington, D.C. as advertising director of “Museum and Arts” magazine before the teaching jobs and move to Seattle. During her stay in the nation’s capital, Adelman absorbed Old Masters at the National Gallery of Art, Smithsonian American Art Museum, and the Phillips Collection, where she also worked as an educator. These experiences turned her toward portraiture. She began a series upon her arrival in Seattle, as well as curious re-interpretations of canvases by a diverse range of masters, such as Van Eyck (“Madonna of the Chancellor Rolin,” 2010), Watteau (“Pierrot, 2010”) and, recently, Lucian Freud.

Her sitters’ piercing and psychologically revealing gaze grows out of the artist’s own experiences with querulous vision, inadvertently reinforced by an unexpected return of ill health that for a time extinguished her studio activities. Today she is able to work regularly if slowly, teach small groups, and participate, if quietly, in the Seattle art scene. Joining many artists that have been pushed out of town due to the skyrocketing rents fueled by Amazon and Google employees (over 150,000 in the last five years), Adelman now lives in Lynnwood, a suburb north of Seattle. She is able to maintain a reduced-size studio in the Ballard neighborhood. Though her pictures benefit from a strong undergirding of drawing, the viewer’s perspective shifts from crisp to blurry depending upon the figures’ unstable position within the composition.

Taking a lighter approach than Adelman’s somnolent characters, Tullai, a native of Hawaii who was educated at University of Washington (BFA, 1992), casts her net wide in terms of both subject matter and style. Early landscapes such as “Kiholo,” “Kukio,” and “Honokauna,” (all 2006) capture tropical beach scenes and turbulent water that appears perfect for surfing. Others are Pop Art-inspired vignettes of food still lifes and commercial products. As if her geographical isolation were not enough, Tullai has created an artistic pseudonym, Alice Dean (“sounds like LSD,” according to the artist), also the name of one of the three rock groups with which she performs.

These activities do not seem to contradict her meandering subject matter. Among these, one area, all-over abstract painting, seems more fully explored materially and formally. Color explorations, such as “M Painting” (2009), “Seven Painting” (2009) and the “Monochromatic Hypnotic Repetitive” series (2009) inform larger works averaging four by four feet, with dozens of variegated squares jammed into a bulging frame, emulating both quilt patterns and the legendary blue-and-white “ikat” tie-dye textiles of the South Pacific islands such as Java. “Colorful Pixels,” (2011) displays a wide palette and demonstrates Tullai’s chromatic facility. Recent works like “Moana” (2020) have gotten larger and allude to Hawaiian sites with churning water and surf through drips of paint applied in horizontal swaths.

Tullai is also unknown beyond the confines of the internet. She continues to work at her studio-home on the Kitsap Peninsula. Her talents deserve wider attention, as do those of Adelman and Shapiro. Such a likelihood is, however, slim given their current contentment and commitment to comparatively reclusive lives. The art that each produces is the best argument for the wisdom of that decision.