Galleries in the Streets
Feature Article
by Lynn Trimble 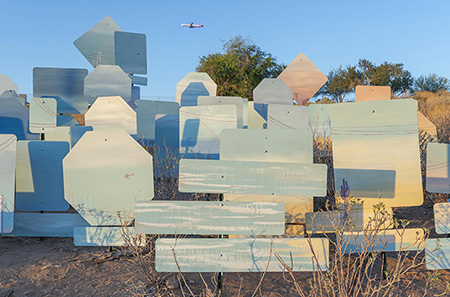 Long before I started writing about art, I was captivated by it — especially the pieces of public art I stumbled on during my everyday travels. Instead of hitting more formal art spaces like galleries and museums, I made my way along urban streets and neighborhood pathways, searching out works of public art that signaled the creativity in my midst. When someone needed directions to a bookstore or restaurant, I told them which sculpture to watch for, instead of giving them exact crossroads. I learned my way around new cities by following the art, and fostered friendships with people who found a similar joy in serendipitous discoveries.

Most traditional art spaces have been closed for six months, in part because of an unwritten social contract that says it’s best to isolate when you have the luxury of doing so, as a way to help keep the people who aren’t nesting in a world of privilege safe. For a time, I observed regular gallery-goers going without art, thinking the virus that still dominates our lives would be short-lived. Now, even as some art spaces like the Metropolitan Museum in New York City and the Heard Museum in my home town of Phoenix have reopened, it’s clear that most people don’t feel safe rushing back with wild abandon.

Public artworks that people once took for granted have become poignant markers of the cultural vitality that still undergirds our communities. Neighbors gathered around the sculpture of a mythical Phoenix in the Garfield neighborhood recently, affirming the need to wear masks with the simple act of placing a giant fabric mask over its beak. For a time, a giant white jackrabbit sculpture on a Scottsdale street dotted with galleries donned a mask, as well. More than a mere gimmick, it reflected the ways pieces of public art can feel like members of our extended family, especially when the peril of something like a pandemic is in our midst.

People who once sought recommendations about which exhibits to see are asking instead about ways to organize small tours of public art offerings. I can feel their desire to experience connections to art, and to each other, as their sense of isolation grows. Some are taking friends along to see murals painted in public spaces, or printing maps of sculpture walks posted on websites for nearby cities or towns so they can follow along with their footsteps. Works that once felt like strange aberrations, such as Laura Spalding Best’s field mural comprising a mirage landscape painted on decommissioned traffic signs and installed near an urban lake in Tempe, have become a lifeline for those mourning the loss of regular art encounters. While people are out exploring art, they’re restoring lost connections to the public spaces they once occupied with a completely different mindset. They are seeing parts of the landscape they hadn’t noticed before.

For a time, artists hit the pause button, expecting life would return to normal soon enough. Some grew frustrated when exhibits got canceled. It became clear that technology, while important, wouldn’t be the cure-all. It turns out that posting images of artworks on a website, then calling it an exhibit, falls far short of fulfilling the compulsion to be physically in art’s presence. So artists like the Phoenix-based ArtFarm collaborative found new ways to take their art to the people, organizing temporary art installations in outdoor spaces where people could safely explore them alone or in small, socially-distant groups. Dozens of artists took part in a “Roadside Attraction” project, making paintings, ceramics, mixed media pieces, and other works that could be shared outside for a brief span of several weeks. Organizers created a map to help people find them and added in other types of media and performance. Films would be projected onto neighborhood walls, dance works performed in building storefronts beautifully lit to create silhouettes of shadows after sunset. I hear there will soon be a new crop of works for a “Roadside Attraction” public art intervention with a political twist.

Other art interventions are aimed at shifting public policy, inspired by the “Black Lives Matter” street mural in Washington, D.C., and the “Remember What They Did” initiative that’s rolling out billboards and posters with designs by renowned artists such as Shepard Fairey and Swoon. These and other projects are centering art as a catalyst for community transformation. It’s telling that so many backdrops for the Democratic National Convention roll call vote featured works of street art. I you think art during a pandemic would be reduced to a mere frivolity, think again. Clearly, public art is having a moment. But we'll have to keep it front and center in our conversations and community art practices if we want to sustain its cultural significance in a post-pandemic art world.