Leave Nothing Out
Editors’ Roundtable
Column by Margaret Hawkins 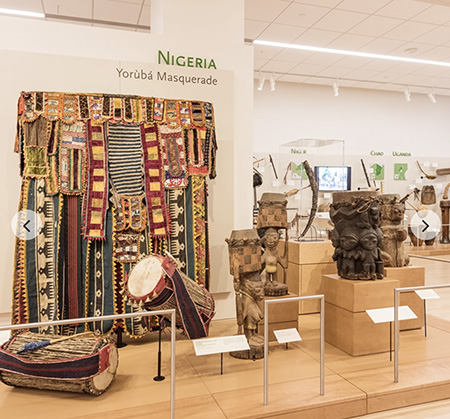 But Phoenix doesn’t do rickety and dim. MIM occupies a new (2010) 200,000 square foot building that is airy and light-filled, set on a sprawling site landscaped with desert flora. It boasts a collection of 15,000 instruments from around the world, half of which are on display at any given time. Committed to the encyclopedic museum model, MIM offers a viewing experience that feels similar to walking any good art museum. One’s eyes gorge on beauty while the mind whiplashes between cultures.

The majority of the vast exhibition space is divided into five galleries organized roughly by continent, then by country and territory — about 200 in all. When the museum opened, one critic sniffed that this strategy distorts music history, compressing the rich and complex musical heritage of large countries with diverse cultures into a few token samples, while over-representing those with smaller populations and far less diversity, sort of like Wyoming getting the same number of senators as California. It’s true that this approach may not be the most scholarly, but so what? MIM reflects a different kind of diversity, intentionally slipping out from under the yoke of traditional snobbishness. I found the result thrilling and addictive, lending an almost compulsive inclusiveness to the place. We all know by now that collecting can lead to hoarding, and that’s a sickness. But it’s also true that just a touch of maximalist mania makes for a kind of excitement that a more academic approach to curation lacks. One cannot imagine in advance how many different kinds of zithers, drums, guitars or flutes there are in the world until you see this exuberantly thorough collection. It’s devoted to not leaving anything out.

MIM’s remarkably accessible display style supports this spirit of urgent inclusiveness. In most cases, not even a glass barrier separates itchy hands longing to pluck strings from the fragile objects on view. Luckily, the Experience Gallery quells that frustration somewhat, offering us the chance to touch and play real instruments. There, you can strike or just stroke a tall Indonesian gong and wave your hands over a theremin (think Brian Wilson, Good Vibrations) to make spooky sounds eerily similar to those a dog makes when he dreams.

Touch notwithstanding, the main senses appealed to here are sight and sound. It is an irreducible and mysterious fact that musical instruments are beautiful. Try to think of one that isn’t. To display them in a museum though, as art objects, without allowing them to do what they’re built to do would be a little like pinning butterflies to a board. The genius of MIM is how they solved that problem.

As a rule, I demur when offered audio guides in art museums. At least on the first walk-through, I prefer to form my own first impressions. The kindly volunteer who tried to drape headphones around my neck noticed me physically recoil. Fortunately, he persisted, and once he explained why, I was glad he did.

Here’s how it works at MIM. Instead of hearing an explanatory lecture in your head while looking at a thing, you hear … music. That’s it, no educational droning, no bossy instructions on how to feel. Audio is activated when you pass in front of any of the hundreds of flat screens throughout, each one playing a video of a performance on the same kind of instrument that’s on display nearby. The only time human voice enters your head is when it’s used as a musical instrument, in the form of song or chant or something less definable. You watch concerts, jams, rituals, dances, ceremonies, celebrations. You listen to an excerpt from a Chinese opera while viewing the multiple instruments played by the orchestra that accompanies it. You see and hear a Maori wedding chant with chest thumping as the only percussion; a man playing a double nose flute; Mongolian throat singers making musical chords with their own vocal chords; a pat waing also known as a Burmese circle drum, consisting of 21 drums surrounding one extremely energetic man; the world’s largest playable Sousaphone. In stillness and silence these objects — made of gleaming metal, polished wood, animal skins, simple gourds — are beautiful to look at. Animated by sound, the beauty expands exponentially. Hokey to say, maybe, but the transformation is a kind of magic that never gets old, or even explicable. How does that happen? Sound, sure: waves and vibrations. But, music?

I left dazed and giddy, with several conclusions. One is that humans, no matter their resources or circumstances, are determined to make music. Another is that musical instruments are, sorry to keep returning to this word but it’s unavoidable, beautiful. One wonders why, whether “beauty” is a value we assign to something we love or if it comes from mathematical equivalencies our brains are predisposed to find pleasing that link music to visual design. The more you think about it the more these two possibilities seem inextricable and satisfying. The easy part of that equation is the universal appeal of music, the way it somehow knits together body and mind, while circumventing thought and cutting through every social, class, economic and racial barrier. But there was something more. I kept returning to that difficult, irreducible word, beauty.

Peter Schjeldahl once wrote that beauty is an event that happens to an object. I’ve thought about this claim a lot, as we do think about things we don’t understand when they’re stated with conviction by someone we respect, even more after that person announces he’s dying. That cryptic statement came back to me at MIM. Maybe this is what he meant. Maybe functional objects — think of hand tools, some cars — are especially prone to this transformative event. Purposeful, aesthetically disciplined human action over time such as blowing, strumming, rhythmically tapping or pounding animates an already well designed object and elevates it to the beautiful. One art form ignites another.

The visit to MIM has left me with two intense memories. One is a video of a row of little South Korean girls dressed in bright red traditional costumes, maybe six or seven years old, lined up on a stage, violently strumming in perfect synchrony on identical lute-like instruments almost too big for their laps. They sing, with a kind of desperately forceful sincerity, some song written in a scale that sounded dissonant to my western ear. Dissonant also was the rigid way the children appeared to have been groomed and marshaled to perform. But their pure voices and the urgent way their little fingers coaxed such big tight sounds out of the simple oval objects in their laps blew me away. Which led to my second, much older memory, a performance by a clutch of octogenarian Cajun fiddle players and one accordionist onstage at the Eunice Opera House in Eunice, Louisiana, sometime in the 1990s. The men, gaunt, fragile, careful of their delicate bones, seemed barely able to move. Then they started to, though not much. Bows sawed a few inches up and down, fingers pressed ivory buttons while hands worked a bellows, together conjuring a furious storm of sound the joyful likes of which I’ve seldom heard since. Surely these were events of beauty happening to objects.

Maybe beauty gets switched on and off and it’s our interactions with things, even the act of paying attention, that flips the switch. Maybe it’s the aesthetic equivalent of the observer effect in quantum mechanics.

Now, at this weird juncture in modern life when the museums and galleries that have supplied our customary aesthetic fix are suddenly shuttered, it may be time to turn our attention elsewhere and activate beauty close at hand.