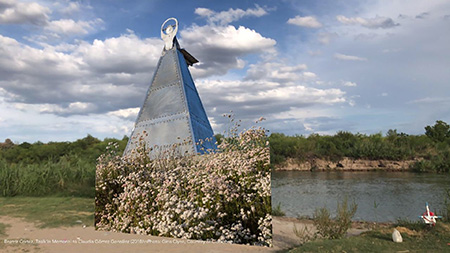 A recent exhibition at Beyond Baroque’s Mike Kelley Gallery in Venice offered visitors a hands-on experience with “augmented reality (AR) art,” a technological art form (also known as “mixed reality (MR) art”) that has been gaining favor over the past few years. Unlike Virtual Reality (VR), which involves wearing goggles, augmented reality requires looking at an artwork through a smartphone or tablet onto which a specific app has been downloaded. AR, in short, merges digitally produced imagery with the real world. In some cases, visitors to the exhibition could view an artwork only after downloading popular apps such as Artvive, Blippar, Hoverlay, and Virtual Mutations, all of which are available from the App Store or Google Play. In other instances, we downloaded apps designed by the artists themselves or used tablets on hand that were pre-loaded with custom apps. In order to view artworks on the walls, we had to activate them.

Drawings and paintings by Jody Zellen and Bill Barminski, seemingly complete artworks on their own, became animated when viewed through my iPhone, with images morphing and digital collages forming as I watched. Touching my phone’s screen triggered Daniel Leighton’s prints, transforming them into whimsical animations with sound. Seen through a tablet, Will Pappenheimer’s small painting based on a Sol Lewitt geometric composition transformed into a sea of swirling waves with lifelike humans swimming in them. Yet, although these works are intriguing and entertaining, I came away wanting something more, which could have more to do with the limitations of the venue than the skills or visions of the artists. For many of them, AR is only one of several creative avenues being pursued. From my vantage point, the chief problem with engaging with the small scale AR art is that viewing was cumbersome, fleeting, and something like a game. I left curious if this new technology has yet to be used as a means to produce content that has deep meaning or an emotional charge.

As I delved deeper into the topic, I found that there are indeed some more ambitious and effective ways the medium is being used that demonstrate its potential, not only for artists, but for exhibiting institutions. For artists, AR seems to fare better when employed for installations, public art and guerrilla interventions. For museums, it is evolving as a tool for education and visitor engagement.

Last fall, the Whitney Museum of American Art presented “Wolf Nation,” an exhibition by Indigenous artist Alan Michelson, which included two augmented reality installations produced in collaboration with AR specialist Steven Fragale. A Mohawk member of the Six Nations of the Grand River, Michelson is recognized for site-specific installations that unearth and re-contextualize repressed histories, including many pertaining to his Native heritage. According to written accounts and published photos, both installations were immersive and illuminating. After downloading the required app, viewers looking through their phones saw the museum lobby transform into a field of tobacco plants changing through the seasons. In digitally recreating what lower Manhattan looked like before the arrival of Europeans, Michelson set the stage for the narratives of three installations on the fifth floor. One of these featured a bust of George Washington before a backdrop of his Mount Vernon estate which, when activated using the AR app, turned into an image/text montage that told the story of Washington’s directive to imprison and destroy the property of any Native American who sided with the British during the Revolutionary War.

In the public art arena, Los Angeles-based artist Nancy Baker Cahill recently launched “4th Wall,” an app that is currently being used by Cahill and others for an ongoing series of curated AR public art exhibitions, called “Coordinates.” Using the 4th Wall app, digitally produced site-specific art is now available to be seen like mirages appearing within limited range of locations that are connected to specific GPS coordinates. In 2018, San Salvadoran artist Beatriz Cortez used 4th Wall to add a poetic dimension to her project for the Hammer Museum’s “Made in LA” biennial. Cortez created three versions of a mechanical sculpture that she based on ancient Mayan calendars, one of which existed only through augmented reality. While the physical sculptures were on view at the Hammer and a location near the Los Angeles River, the virtual version could be seen at a geo-located position along the Rio Grande River near a site where an unarmed Guatemalan woman, a descendant of the Mayans, was killed by an American customs and Border Protection agent.

One of the more revolutionary approaches to AR art is practiced by the artist collective behind MoMAR, which the members define as “an unauthorized gallery concept aimed at democratizing physical exhibition spaces, museums, and the curation of art within them.” Using the MoMAR app, visitors can superimpose virtual artworks created by the group’s participating artists over already existing ones as a way of challenging the authority of an established institution’s programming. Since 2018, three MoMAR exhibitions have popped up at the Museum of Modern Art. At one of them, visitors using the app could see Jackson Pollock paintings completely altered, as in one instance where the paintings were subversively replaced with imagery pertaining to right-wing conspiracy theories. In explaining their intentions, MoMAR’s organizers see their endeavors as providing playful entertainment, in the tradition of the 1960s Fluxus movement.

In certain respects, such motivation is not so different from the goals of Cuseum, a Boston-based company that is helping museum’s use augmented reality as an exhibition enhancer. Although they recently assisted Miami’s Pérez Art Museum in presenting a solo AR exhibition by Miami-based Felice Grodin, I am more intrigued by their vision, as stated on their website, of allowing visitors to enter into the space of classic paintings like Van Gogh’s “Starry Night.” I can’t help but wonder if Van Gogh would approve.