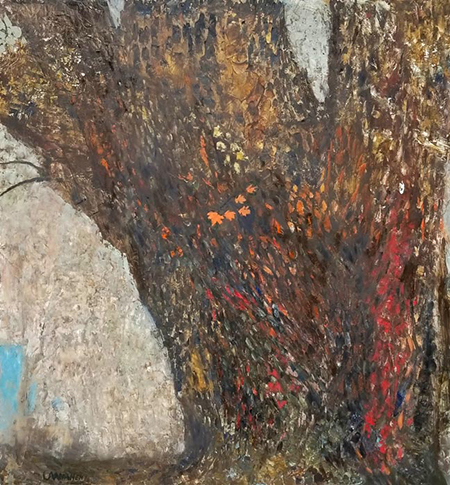 The twenty-two small to medium-size paintings are divided between identifiable imagery, such as “Swan,” the only animal image, “Cronk Road Spring #12” and “#13,” and by more abrupt compositions such as five paintings of mushrooms which abandon recognizability in favor of curvilinear, jig-saw shapes of complementary browns, greens and blacks. With wood panel as a base, the stabbed-on colors are built up around caps and stems, using the fungus as a point of departure for other works. Somewhat limited by his choice of a firm canvas substitution due to its rustic base, “Ominous Cloud,” “Night on the Sun” and “Stone Age” are intimate studies of color and shape with allusions to nature, rather than glimpses of it. Laananen’s brushy attack could become a mannerism rather than an expressive tool if he continues on this trajectory. Uniform surfaces reinforce tight, convincing compositions, pushing the works toward greater formal strengths.

Among the larger panels, “The Maple Trunk,” “Chuckanut Bay” and “Autumn at Marble Creek” achieve distant echoes of postwar European modernists such as Serge Poliakoff and Nicolas de Staël, with the late local artist Joseph Goldberg as an invisible avatar. It’s probably too late for Laananen to become a tardy modernist, but his impulses appear headed that way.