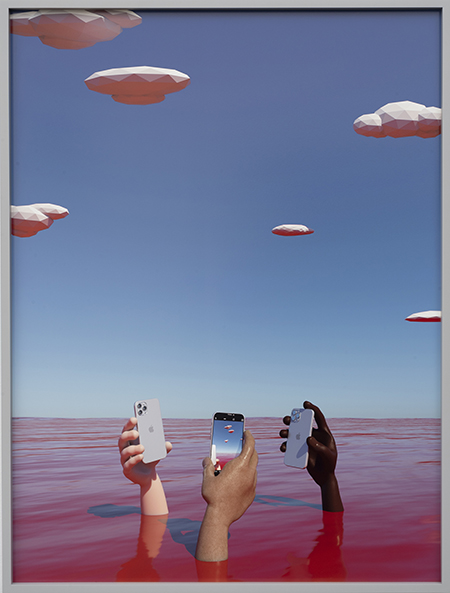 Joe Sola’s “I Drove to San Francisco and Back” is a digitized romp through some of his quintessential tropes (cartoonish geysers of blood) and tricks (in this case a waiver performance), but the star attraction is a Virtual Reality experience titled “Changing Room.” It’s an approachable entry point for VR novices (including yours truly) and does indeed pass as a work of art as opposed to a video game/novelty. It very loosely relates to two sets of pigment prints: one is a series of landscapes — a desert, a beach, a “Stack of Boulders” — bathed in a golden hue, and have apparently been generated with VR software, as discerned from their fabricated-but-with-just-a-hint-of-verisimilitude auras. The other series of prints (each in its own gallery; the golden landscapes are paired with the VR setup) features hard drive server rooms (physical manifestations of The Cloud, if you will) that are flooded ankle-and-sometimes-head-deep in blood, and manned alternately by a ‘Hippie’ and a ‘Farmer.’ In “Humans” three hands rise up out of a sea of blood to take pictures of the sky with their iPhone 11s.

The celebration of Americana macabre tends towards the facile in these prints, but it really hits its stride in a deeper and more immersive way in “Changing Room.” Your home screen is a luxurious though spare dressing room populated only by a couple of chairs and a plant, and a case with several Oscar trophies in the corner. Sitting next to you on a yellow bench (which also exists IRL in the installation) is O.J. Simpson, collaged together from various phases of his life and career. A couple of simply drawn cut-outs (one a UFO) signals your launch into Sola’s virtual worlds. There is a snowy canyon with gold clouds that are shot into firecracker gold dust; the base of a football field in a darkened stadium where you’re transported through a headless surgery patient’s genital cavity; and a room in which Fred Flintstone and Barney Rubble orchestrate a procession of instant decapitations, from which the aforementioned geysers of blood flow. Meanwhile, a tiny chef on a bicycle rides back and forth in the foreground like some sort of David Lynchian Angel Moroni. Yes: better to experience than to attempt to translate. And if you’re still wondering what the stunt is (and stunts are key to Sola’s oeuvre), it’s an installation called “Waive Everything,” in which you double if not triple sign a wordy waiver release to gain access to a plywood-floored room with an exposed, red-tinted lightbulb. The ‘there’ there is possibly our over-litigious society; or, it could be the power of our own imagination (and paranoia) in reaction to the charged setup the artist has planted. If nothing else, it’s a vibe and a conceit that is impressively situated way over at the other end of the spectrum from the VR plunge.