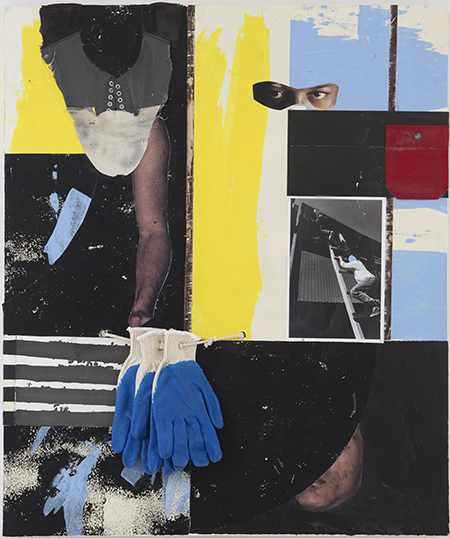 For some time now, I’ve been observing the legacy of Robert Rauschenberg’s particularly compelling manner of assembling found material culture to entice and inform.  Move over Picasso, for this southern, gay American, who first shook up the New York art world and then set up shop on the west coast of Florida, is now the canonical influencer, engaging legions of young, contemporary artists in what I dub the “Rauschenberg Effect.” Last year three major venues for what’s happening in contemporary art — the Whitney Biennial, the Venice Biennale and Chicago’s Art Expo — all showcased myriad artists under the late artist’s spell. Certainly collage and assemblage have been around longer then Rauschenberg’s innovations, but the scale of his found elements, the grid as a dominant structural armature, the particular combination of newsprint, fabrics, photographs, and urban detritus, and the implied “iconography” throughout this material, all punctuated by lyrical passages of drawing and painting, set a powerful model for those drawn to the “Rauschenberg effect.”

At the Whitney Biennial, Troy Michie’s architectonic composites of found photographs, cut clothing, Cellu-clay, and other motley stuff assembled on woven magazine pages were a clear homage to Rauschenberg. The artist hails from Texas (like Rauschenberg), and takes on some of his fellow Texan’s themes.  Included in “Borderwalk/This Thin Edge of Barbed Wire,” for example, is a man’s pants pocket that references Rauschenberg’s coded use of men’s pockets in the early “combines” as a homoerotic symbol. Hidden in plain site was Rauschenberg’s way of expressing identity in the hostile, homophobic America of the 1950s. We’ve come a long way, and Michie justly reminds us of the visual tricks Rauschenberg was forced to play, while the artist today is relatively free to put forward images and motifs that speak directly to the issues of historically marginalized communities.

Other artists in the Whitney made it seem as though a Rauschenberg retrospective was intermittently woven into the proceedings. Tomashi Jackson’s (again from Texas!) “Hometown Buffet – Two Blues (Limited Value Exercise)” presents a gridded array of found materials put together like a hanging quilt that recalls Rauschenberg’s many early fabric inclusions, particularly “Bed” (1955). Like Michie, a politics of social history (in this case, some of New York City’s racist property ownership history) is on offer through a stitching together of provocative artifacts and signs. Eric N. Mack’s hanging fabric assemblage, “Proposition:  for wet Gee’s Bend Quilts to replace the American flag—Permanently,” takes a page from Rauschenberg’s multiple series of diaphanous, layered fabric pieces and his attention to various political themes of his American home.

In Venice, Bahamian Tavares Strachan’s large collage works of mixed media, including photographs, diagrams, and other graphics from the Encyclopaedia Britannica, were composed very much like Rauschenberg’s silkscreen arrays from the 60s with their varied diagrams and images of modern technology — a constant in his thematic lexicon.  The massive tires wrapped in chains by Arthur Jafa recall Rauschenberg’s introduction of the rubber tire as a found object in any number of his combines, as well as his fearless engagement with sizable collage items, such as taxidermied goats, ladders and large pieces of twisting aluminum.

In Chicago, Molly Zuckerman-Hartung’s “Mrs. Parker’s desk in anticipation of Alfred Jensen” put gestural mark-making on top of collaged materials in a manner similar to Rauschenberg’s duet of expressionism and pop semiotics. A large painting by the Colombian artist Oscar Murillo, titled “VS 25,” is a wildly inventive mix of patterns and forms that draw on the rich patchwork quality of a Rauschenberg. When Murillo states, “Art and Life, there is no separation between the two,” he reiterates Rauschenberg’s famous statement that “Painting relates to both art and life. Neither can be made. I try to act in that gap between the two.”

The list of those artists following Rauschenberg’s lead of “acting in the gap” between art and life goes on and on. And while the art world has always had its mentors for younger artists to embrace and then often topple, Rauschenberg has stayed the course in terms of impact and influence. Whether they draw directly from Rauschenberg’s example, and as we see some certainly do, it may also be the case that Rauschenberg intuitively saw that which dominates our current condition and to which contemporary artists are responding. He saw the cacophony of the semiosphere early, and chose to picture our chaotic, multi-screen, multi-tasking vision well in advance of the digital technologies that now permeate the culture. Rauschenberg attempted to honor our pluralism, in all of its complexity, by organizing it into patterns of recognition. He released reoccurring themes that speak to our humanity. His was perhaps the most affecting path through the morass of stimulation. Let the “Rauschenberg Effect” continue to be felt far and wide.