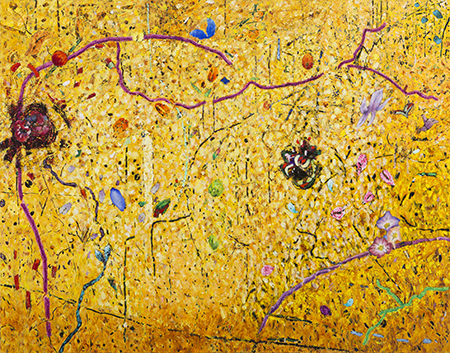 Nature is alive with movement, from the rhythms of microscopic organisms to the dance of shifting clouds. The world is at play here, with two artists whose passion for the kinetic pulse of nature takes two very different forms. Jim Waid creates painterly works that border between abstraction and landscape. Layered with color, texture, and his own whimsical mark, they exude the joy inherent in the natural world in its purest form. It’s a strong contrast to more polemical artists who focus on the ways nature has been neglected or assaulted by human endeavors. Waid provides a subtler cautionary tale, calling to mind the rich complexity of organic form and color, freed from human subjugation. We see a mix of forms both familiar and mysterious, as Waid channels the paradoxical relationship to our surroundings in which much is taken for granted yet much remains unknown. Six of the nine works shown here are acrylic on canvas paintings created from 2017 to 2019. Also included are two mixed media on paper pieces and a pastel on paper work, all done this year. Most intriguing is “Jabberwocky,” in which branch-like lines in a sea of yellow dots and scratches seem to bend at once both toward and away from one another.

Waid’s works are interspersed with eight photorealistic landscapes created during the same time period by David Kessler. Kessler uses brushed aluminum surfaces for his acrylic paintings, which convey a naked technological gaze that nonetheless conjures a sense of mystery. “Silvered Outcrop” beckons us much like a noir film, punctuating the ways his perspective is saturated with complexity. Presenting these works together reinforces the infinite diversity of the natural world and the myriad manifestations of its interconnections, even as it calls one to embrace the fluidity at its core.