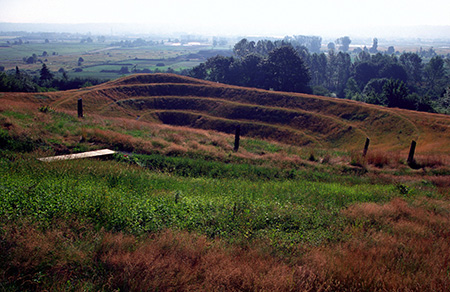 In the documentary film “Troublemakers: The Story of Land Art” (2015), Michael Heizer, Walter De Maria and Robert Smithson are singled out for their seminal contributions to what also became known as “Earth Art,” or, as in the case of the 1979 King County Arts Commission land reclamation-as-art project in Seattle, “Earthworks.” The term was first used by Robert Morris, titling his “Earthwork” in 1969. Morris is mentioned in the film along with related artists Carl Andre, Nancy Holt, Dennis Oppenheim and others. Morris and Oppenheim were part of the massive King County undertaking, which included a Seattle Art Museum nationally touring exhibition of all eight proposals; a July-August  symposium; a blue-ribbon New York selection panel; and an accompanying catalog by SAM curator Sarah Clark and affiliate curator Craig Langager. Press coverage was voluminous. Within the art world, Earth Art was widely considered a serious response to the private-market gallery system of selling objects (an avant-garde ‘60s no-no) though, as later became clear, both Smithson’s and Heizer’s largest sculptures were underwritten by an heiress to the industrial manufacturing conglomerate 3M, Los Angeles art dealer Virginia Dwan.

The similarities and differences between the Dwan group and Seattle land reclamation-as-public art could not be more clear-cut today, although they were not at the time. With public patronage instead of a narrow, private patron, artists in Seattle participated in proposing and executing visionary plans for public betterment with politicians agreeing to fund long-term amelioration sculptures that, among other things, in-filled former gravel pits (Morris’ “Untitled Johnson Pit No. 30,” 1979); control erosion in water-retention basins masquerading as park ponds (Herbert Bayer’s “Mill Creek Canyon Park,” 1979); create what proved to be six unbuilt or unbuildable, geographically inaccessible playgrounds for the disabled (NE Thing Co.); sinkhole measuring posts (Beverly Pepper); a stone quarry converted to housing (Richard Fleischner); a wooden baffle resembling military barracks near a noise-polluted airport (Mary Miss); underground lighting paths in a concrete ovoid (Lawrence Hanson); and a series of visionary structures to help Oppenheim build his “thought collision factory for ghosts.”

Heizer had already arrived in Seattle in 1977 to create his only easily accessible work at the time, “Against, Adjacent, Upon,” in Myrtle Edwards Park, next to the former toxic Superfund clean-up site which became SAM’s Olympic Sculpture Park.

At the symposium, panels and talks were listened to intently, but none more so than Morris’ keynote, memorable for his declaration, “The distinctive difference of art is that it does not seek control through explanation.” Ironically, this came from a highly voluble and widely published writer on art. Other speakers included Elizabeth C. Baker, then editor of “Art in America,” and critic Brian O’Doherty. What another critic Lawrence Alloway had disparagingly referred to as “gardening art” came into its own in Seattle that summer.

Subsequently, a catastrophic landslide occurred on one side of Morris’ project, leading to its first restoration. His initial fee was $80,000 for the design of the inverted spiral jetty which descending to a void at the base, selecting and planting rye grass, and allotting space for a bronze plaque. In 1994-97, he was paid another $98,000, this time to oversee new plantings of blooming ground cover, arrange for the bronzing of the formerly tarred tree stumps, and hire a herd of goats to mow the lawn (shades of an early Oppenheim piece with sheep). Since then, $10,000 is allocated annually for upkeep. So much for the aesthetic of entropy and decay Morris lifted from Smithson and that he had once touted.

Bayer, an original Bauhaus member and pupil of Kandinsky, was completely comfortable designing “Mill Creek Canyon Park” because he had previously infiltrated corporate America’s design elite, designing the “Great Ideas of Man” ads for Container Corporation of America. In Kent, Washington, flooding problems were solved by picturesque ponds, each arched by a bridge, with nearby mounds of turf. The grassy knolls had emerged from an earlier precedent, Bayer’s “Earth Mound for Aspen” (1955), adding another historical pedigree to the movement, not to mention echoing visionary landscaping projects of 18th-century Europe.

Public art later developed into more site- and site-history-related content (see Ann Hamilton and Buster Simpson), not necessarily to correct industrial sins, but to anchor art to neighborhood and locale in ways that urban planning and rapid suburban development disregarded. In this sense, both Morris and Bayer spearheaded pioneer artworks of their own, not in heroic places like Death Valley but in a former gravel pit and a city park prone to flooding. Anticipating climate change side effects forty years ahead of its time, the entire King County Earthworks event scolded past industrial sins. But few could have foreseen further environment damage on the scale we now face. Maybe we should have paid more attention to the post-rainstorm landslide at “Johnson Pit No. 30” at the time.