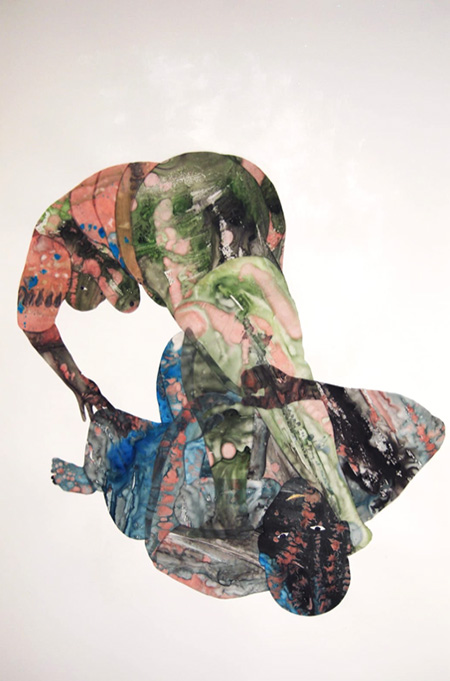 Florine Démosthène surrounds her collages with an installation of wainscotting, and within this architectural detailing the artist’s images seem as though they’re ensconced in some storied place. The Black women who appear throughout “Between Possibility and Actuality’’ are often duplicates of one another, with the curves of their bodies rendered in cut-out Mylar painted in undulating washes of earthy browns and jewel-toned teals and blues. In panel after panel, the women appear to float in a blank ground, their various poses, gestures, props and scenes reinforcing Démosthène’s own narrative iconography, which as the exhibition title suggests, is simultaneously familiar and fantastical.

The twin figures of Démosthène’s works are often based on her own body, making her content that much more affecting. In “For The Time Being,” the double protagonists lean on one another in a gentle embrace. A pair of works, “ I Don’t Want to Leave You Behind…” and “...But I Have To,” depict, respectively, one subject carrying the other through treacherous ground, only to then leave her laying on the ground, arms outstretched in desperation. In “Every Empty Space,” a woman with a smaller figure in her arms is bound by a cord that is also wrapped around her twin’s wrists and neck, each straining against the other towards opposite ends. Amongst many other things, the alternative mythos Démosthène’s establishes with these works reinforces the notion that what one does to others and how one treats oneself are reflections of each other.