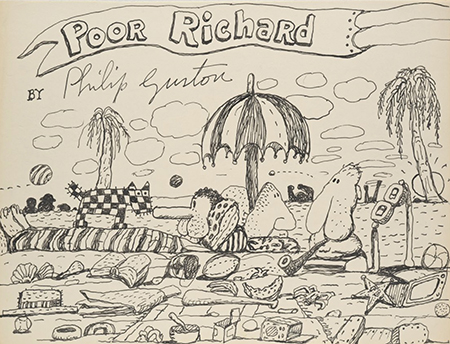 As it turns out, the quintessential artist’s artist is just as much of a cartoonist’s cartoonist. “Resilience: Philip Guston in 1971” showcases two bodies of work: a series of mostly modest-scaled paintings on paper made in Rome, and “The Nixon Drawings,” an epic series that’s unwavering in its satirization of the late Tricky Dick. The artist’s “resilience,” as per the show’s title, refers most notably to the critical and often reactionary response to Guston’s solo show held at Marlborough Gallery the prior year, in which he introduced his cartoony figurative paintings to the world after having thoroughly established himself as a first-tier New York Ab-Ex painter. If only Guston had known what an honor it was to be trashed by then-New York Times critic Hilton Kramer, perhaps the most conservative major art critic we’ve ever had.

After a period of licking his wounds from the criticism — not just from writers, but more of less the entire New York art establishment — Guston got back to work while on a residency in Rome. While the Rome paintings are perfectly competent, in 2019 they feel competent to a fault: a little too easy, despite their clunky figuration. “The Nixon Drawings,” aka “Poor Richard,” meanwhile, feel fresh, and not just because their re-emergence coincides with even more of a ‘Dick’ in the White House. They tap into the then current underground comics sensibility that’s both novelistic and evergreen. Indeed, in addition to migrating his signature cartoon-figures-on-a-horizon-line iconography to these works on paper, the drawing style itself frequently recalls the great R. Crumb (their admiration was mutual). Guston typically caricatures Nixon’s face with a cock (and Pinocchio)-like nose and balls-like cheeks, but there’s substantial variation therein. Nixon isn’t alone in being skewered: his Vice President, Spiro Agnew, is dropped into the saga, as is Secretary of State Henry Kissinger, whose disembodied square glasses frames with eyes become a running gag of a caricature that reaches its apotheosis atop a ‘Kissinger Pot Pie.’ You needn’t be deeply versed in the Nixon years for the biting tone to feel familiar. Nor do you need to abandon your painterly values to appreciate these drawings, which marry comics’ narrative accessibility with Guston’s own inspired abandon.