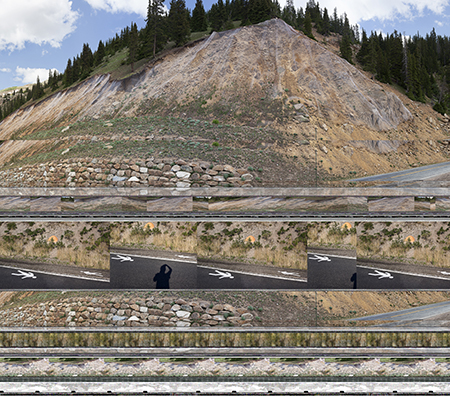 When Angela Faris Belt discovered that thousands of landscape and still life photographs on her computer had been compromised by a hard drive crash, she ran recovery software in hopes of resurrecting the images. Essentially, she relinquished control, and waited to see how the language-like building blocks of digital photography would deconstruct and then reconstruct her artistic output. By serendipity — or maybe because of artificial intelligence — the results pleasantly surprised her. She found that photographs of the same subject that were originally discrete had now been stitched together. Barely decipherable content often turned into a repeating block pattern. In addition, many images emerged with striations all the way across them, and certain data transformed into thick horizontal lines resembling static. As the show title “Entropy” implies, there was no predictability. If in the end the images are flawed, they are brilliantly flawed. “Entropy 5883 (Falling Rock),” for instance, brings together components from two different scenic roadway shots from two locations while retaining the shadow of the artist taking the photograph. The photograph suffuses complexity, yet manages to project harmony and balance. In “Entropy 6125 (Wintering),” the recovery software brought together strips of soft-purplish seed pod images with similarly colored fish X-rays from a science exhibit that make for an intriguing juxtaposition.

In a concurrent solo show titled “Interference,” Collin Parson investigates the act of perceiving and the possibilities of distortion. His glossy, reflective black wall sculptures recall Op Art, and should be viewed from different angles. The works are made of laser-cut and CNC-routed acrylic turned into ripples, strips, ovals and other shapes. The perceptual interference comes from the moiré effect, where Parson has superimposed slightly different designs of black acrylic over each other, with a bit of spacing between them. The oscillations along the 92-inch expanse of “Interference No. 3” unfold dramatically as we move along it length. Altogether, the sculptures are sleek and sophisticated while capitalizing on the dynamics of light, space and reflection.