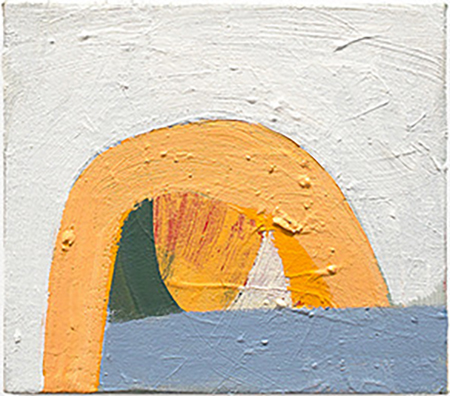 There is nothing facile about David Aylsworth’s paintings. The struggle is visible in the layering of paint, the rough edges, the scumbles and splatters. But those are the very elements that make these paintings work. The “cast of characters” is uniquely his, as are the bold color choices and combinations. The distinctive forms that often dominate the foreground are presented against multi-faceted backgrounds with visible brushstrokes and layers of paint ranging from sheer to opaque. According to Aylsworth, it’s advisable not to search out recognizable figures or interpret certain sections as landscapes. He prefers that we accept the paintings as being “just a few colors and not about finding interesting shapes or relationships.” In “Rectangular is Round,” however, it is perfectly reasonable to intuit the pink and blue forms as clouds floating in a pale sky; in “Brazen Overtures” the white half circle with a red triangle becomes a boat with a red sail in a sea of blue and orange.

Most of Aylsworth’s paintings, however, manage to resist such interpretations. In “Proud Parson Propped” the geometric forms exist independently of one another, with yellow and orange elements on top of a tall red rectangle in turn flanked by narrow yellow stripes, all displayed on a white layer of paint that nearly obscures the pale blue ground. “Umpteen Hours” presents a geometric assemblage in a rainbow of colors that interlock to form a jewel-like effect. For three decades Aylsworth has worked in the sensibility of early modernism, finding much to explore in non-objective imagery. Trial and error have become part of his subject matter, as he leaves on the canvas the evidence of experimentation with various shapes, patterns and colors inspired by daily observation and experience. For titles, Aylsworth borrows lines of songs from Broadway musicals, though they evoke them only through juxtaposition. The artist says he would rather talk about the musicals they are honorifically named for than the paintings themselves. He does concede, however, that the “characters” have distinctive personalities and interact with one another on the canvas. These canvases patiently explore the painterly process, allowing the act of painting to lead to visual conclusions that feel, like Matisse’s good armchair, at ease with themselves.