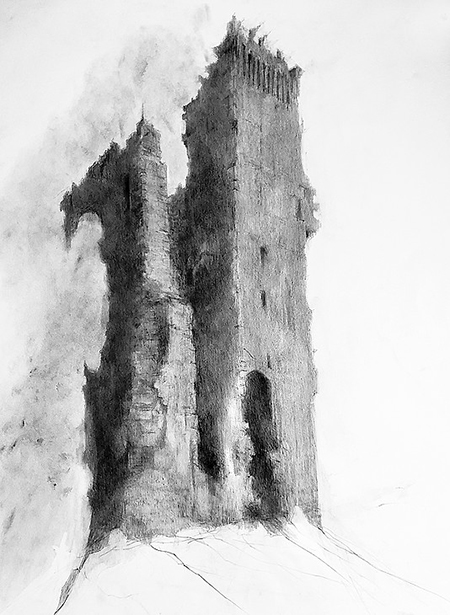 Channeling the sensibility of the nineteenth century Romantic era, particularly its taste for ruins, pre-modern eras, medieval castles and magic, is probably a smart move today. Popular culture has given us the “Game of Thrones” phenomenon, while the news offers the countless ruins of the endless civil war in Syria. In his current exhibition Darren Jones, a Scottish-born artist and art critic who lives and works in the U.S., seizes the opening. His ten detailed drawings on paper of crumbling castles in mysterious, atmospheric settings do more than just exploit the opportunity. Given the simplicity of media, executed entirely in graphite, most at a modestly scaled 34 by 26 inches, their visual impact is astonishing.

Spectral and shadowy, the images point back in time to an aristocratic past whose leaders built these brick structures, aspiring to channel greed, squeezing the population for money while accumulating a monopoly on power. The decaying outlines and failing brick depicted in “The Black Hound Of Glume” or “The High Wraith Of Torridon” bear visual witness to these anti-monuments as critiques of vanity as seen in a more secular age than that of his Romantic forebears. Read in a different way, the purpose and generally rectilinear design of the structures refers to the modern reinvention and continuation of their former place in history. “The Lantern Of The North” pictures a possible precursor to the modern commercial skyscraper. Jones’ expression of an arrogant pride that guides the builders of these fortifications suggests, dialectically, an ultimate decline of absolute power and prestige, now as in the past. This was never expressed more forcibly in words than in Percy Bysshe Shelley’s “Ozymandias,” a poem whose ideas Jones visually communicates with in his drawings:

My name is Ozymandias, King of Kings;
Look on my Works, ye Mighty, and despair!
Nothing beside remains. Round the decay
Of that colossal Wreck, boundless and bare
The lone and level sands stretch far away.