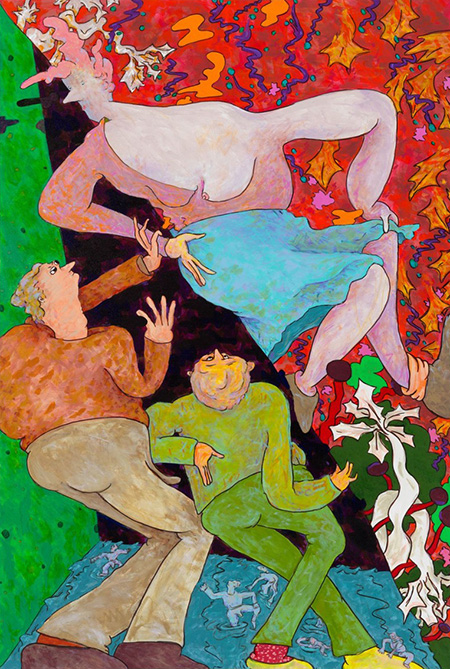 In an exhibition of her latest work, renowned Chicago figurative painter Gladys Nilsson continues to place the female figure front and center. With fluid, undulating limbs and tissues, Nilsson’s women are powerful in their scale and physicality, overwhelming Lilliputian men who peep at them from behind trees, and climb their lush curves. Indeed, the small scaled on-lookers in these paintings are clearly obsessed with these tremendous women. Although the men clamor over their thighs and peer up their skirts, the manner in which Nilsson renders her women has nothing to do with the proverbial male gaze.

Nilsson has often described the women in her works as being “content.” In “Wader,” a green-tinged woman flounces gleefully nude into a body of water, tossing her dress over her shoulder. “Blank Verse” depicts a woman seated on a stump, engrossed in a book, indifferent to a swarm of pale, diminutive men scaling her body like a mountain. Many of Nilsson’s painted and collaged women are rather insouciant, with a notable exception. In “Slid,” the composition is divided in half diagonally, with a pink haired woman floating amidst a cacophony of streamers and leaves. Two large men stand in the darkness atop a pool filled with smaller, thrashing male bodies. One of these big men, with furrowed brows over his beady eyes, has caught the woman by the wrist. We are left to wonder whether the man is jealous of her, wanting to drag her down into the abyss of his fate, or whether he intends to ride her coattails into the vivid, joyful place that belongs to her.