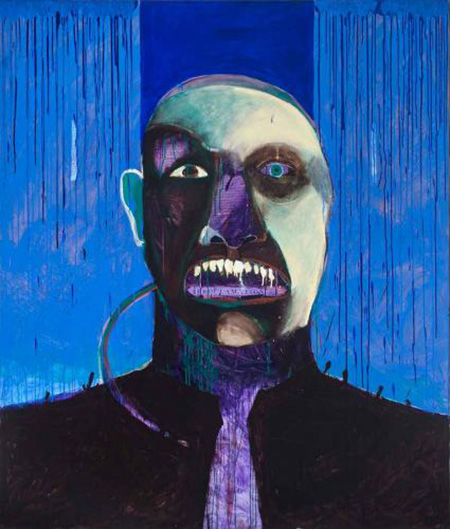 In 1967, one of Fritz Scholder’s more controversial series depicted Native Americans with American flags, beer cans and other items of popular culture. Descended from the California Mission tribe of the Luiseño, it was Scholder’s intent to disrupt clichéd narratives of native culture. He would continue to explore the theme of contemporary Native American culture until the late 1970s onward, when his subjects began to reflect his interest in mythology, the occult, the human psyche, sexuality and dream imagery, often through distortion of the figure. The superhero flavored “Strongman” and “Cat Mask,” both examples of his talent for figurative distortion, are set against austere backgrounds. This exhibition highlights some of the more exceptional examples of these themes.

One of the most impressive and imposing series of the exhibition are the large-scale “Heaven,” “Hell” and “Purgatory” paintings, which explore spirituality, but also the torments of the human psyche. Scholder described them as self-portraits, personifications of the “spirit realm.” His take on “Purgatory” is especially arresting. A torso of a bald being with a terrified expression is set against a light blue background that is calming yet ominous. His jagged teeth exposed, the word “proclamation” emerges from his mouth.

While all of the paintings described above are large-scale, oil on canvas paintings, the exhibition includes a lovely selection of smaller scale lithographs and acrylics. “Woman with Mask” is a beautiful example of Scholder’s “Mysterious Women” series, which explores his fascination with women and sexuality. As the artist states, “Throughout the years, my passion for women has been a major source of inspiration and energy in my work. At times, the subject is very personal. Other times it is fantasy.” Also including smaller scale acrylic and lithograph pieces is his “Fallen Angels” series, which are dark and full of tension, dichotomies of good and evil, hatred and love. While there are many components and themes to this impressive exhibition, all of the work here embodies Scholder’s fascination with humanity, lore, and the tensions we all carry within ourselves.