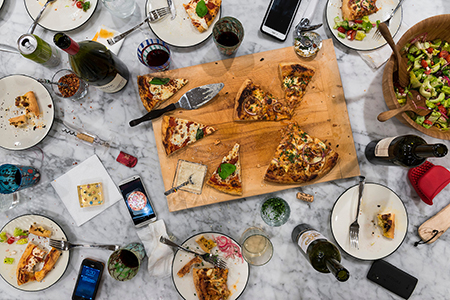 The luscious photographs in the group show “Coming Together” reveal the narrative power of the seemingly mundane. Meg Griffiths, Christos J. Palios and JP Terlizzi make pre-meal and after-meal kitchens and dining room tables their subject. Food is just one aspect of these detailed tableaux, none of which show people, but do represent ethnic traditions, familial relationships and modern-day notions of home. The clearest storytelling comes from Palios, who captures top-down views of dining room tables right after a meal. Spread out on vintage tablecloths, what remains of these repasts include all manner of cheese slabs, fruit plates, pastries and half-consumed espresso. The informally composed, partially consumed objects imply intimacy. In “Nexus,” the centerpiece is a well-incised wooden board bearing leftover pizza slices. Amidst the open wine bottles and corks, the tableau includes four cellphones, one of which displays a snapshot of a whole pie.

Details also play a crucial role in the narrative Griffiths’ photos, which lets kitchen scenes speak volumes about social class, food culture and family traditions. Griffiths focuses on Cuba, where she has lived with various families, to document lives being altered by the country’s recent political changes and increased tourism. To that end, the photos are filled with cultural signifiers such as cigars, Cuban-grown tropical fruits and even a refrigerator magnet reading “Bienvenido a Cuba.” In “American Thanksgiving” we see a prosaic yet telling scene, with attention drawn to an analog kitchen clock, old-fashioned kitchen wares, and a simple tile counter cluttered with the makings for a stuffed turkey.

Less narrative but formally exquisite are Terlizzi’s four vibrant photographs. They reflect a design aesthetic through juxtapositions of floral tablecloths, heirloom china and artfully sliced food. In an overhead view, a perfectly halved artichoke rests in an ornate bowl. A spiraled orange peel dangles from a blue-and-white creamer onto a matching plate. Implicit in all three artists’ work is their respect and fondness not only for the sumptuousness that food represents, but also for the unseen people who elevate the ordinary into a meaningful social ritual.