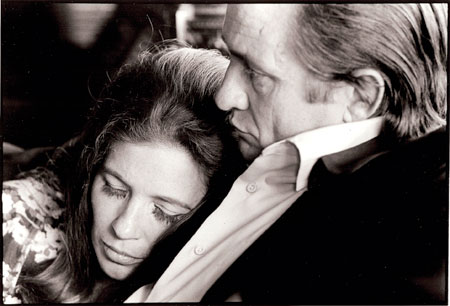 Jim Marshall documented over 40 years of American culture, focused almost exclusively through the lens of popular music. Although his name may not be a household word, his works certainly are. His photo-journalistic-style photographs adorn over 500 album and CD covers, and many of his iconic images of America's '60s rock idols are as recognizable as American Gothic: Dylan rolling a tire down a street in Greenwich Village; Janis cradling a bottle of Southern Comfort; and the infamous image of Johnny Cash flipping off the camera during his San Quentin concert. Unexpectedly, Marshall died in his sleep on March 24, while in New York promoting his latest book, "Match Prints," a collaboration with photographer Timothy White.

Marshall was born in Chicago in 1936, his family moved to San Francisco's Fillmore district in '38, where the legendary photographer would spend most of his life, barring a two-year hiatus in New York from 1962-64. With a lifestyle parallel to those who populated his iconic imagery, Marshall earned a reputation for living hard. "He taught the rock stars how to behave," says gallerist David Fahey, who has worked with Marshall since his first book of rock photography, "Not Fade Away," published in 1997. That first gallery show, held in conjunction with the book's release, was according to Fahey, "the first major exhibition of rock photography in a fine art gallery." And though the show was popular, the idea of rock photography as fine art did not instantly take root.

But opinions have been changing, as photography of the revolutionary era of the 1960s and the shared imagery of its counter-cultural rock counterpart have been slowly infiltrating numerous institutions. Three such exhibitions of rock music are currently on display--in venues as varied geographically and thematically as the Grammy Museum in Los Angeles, the Museum of Photographic Arts in San Diego, and The Memphis Brooks Museum of Art in Tennessee--exploring different aspects of the genre of rock 'n' roll photography. Through these shows, the legacy of rock is expressed in terms of photographic images, and in each Marshall's vision is present.

"Strange Kozmic Experience," at the Grammy Museum in downtown LA features Hendrix, Joplin and The Doors from the years 1967-1970. The exhibition combines artifacts--instruments, costumes, letters, and Joplin's psychedelic car--surrounded by posters and photographs, including works by Joel Brodsky, Elliott Landy, Lisa Law, Eddie Kramer, and a trio from Marshall. Robert Santelli, executive director, notes the relatively new status of rock photography as an art form, and credits the maturing of the Baby Boomers who had come to embrace rock 'n' roll as its sound, as a principal reason for its rise in stature. The revolutionary aura of the period was another. "Any era that is fervent and exciting," Santelli explains, "photography helps to document... to make it myth."

That duality between legend and history is part of the allure of these photographs, leading the viewer to ponder: do they reveal or do they hype? The answer seems to vary from one image to the next. Law's images of Joplin surrounded by the Holding Company have a backyard-snapshot quality, a raw freshness creating an implied intimacy between subject and viewer. Across the room, however, Joel Brodsky's "Young Lion" photo-session of Jim Morrison--the singer, a former film student himself--seems as well-rehearsed, posed and sexy as any professional model shoot. Nearby, a collection of Kramer's images of Hendrix in the recording studio reveal a surprising sense of vulnerability from one of the original guitar heroes, balanced across the room by the now-iconic image by Marshall, Jimi in full-stride, firmly holding his Strat with his other arm outstretched to the sky.

Tracing the evolution of rock through one of its central participants, none other than Graham Nash, "Taking Aim" is an exhibition currently on view at the Museum of Photographic Arts in San Diego. Nash, who is also a photographer, worked with Jasen Emmons, director of curatorial affairs at the Experience Music Project | Science Fiction Museum in Seattle, where the show originated; Sylvia Wolf, director of the Henry Art Gallery; and Christian Peterson, associate curator of photography at the Minneapolis Institute of Art. "Taking Aim" follows a trajectory from the early days to the present, or from Elvis to Cobain, and includes the work of Annie Leibowitz, Anton Corbijn, Lynn Goldsmith, along with the ubiquitous Marshall, and Nash himself.

"Who Shot Rock 'n' Roll," currently on view in Memphis, originated at the Brooklyn Museum in New York last fall. What started out originally as an idea for a book, photographic historian Gail Buckland developed into an exhibition in partnership with the museum. Like "Taking Aim," Buckland's exhibition traced the evolution of the imagery of rock music, but in marked contrast, the point of view of the curator shifted from acclaimed rock insider to self-proclaimed rock outsider. Instead, the historian brought over 30 years of experience curating exhibitions, such as "Cecil Beaton: War Photographs" at the Imperial War Museum, London (1981), and collaborating on numerous books exploring broad photographic histories, including Harold Evan's "The American Century." Equally important for a project four years in the making was Buckland's willingness to explore new territories. "I'm not afraid of big subjects," she admits. "The images were carefree, sexy, poor... and definitely not our parents," she adds with a quick laugh.

Buckland's exhibition was not only about recognizing the impact of rock photography as an influential aspect of defining post-war American pop culture, it was specifically geared towards recognizing the photographers who captured these defining moments. Although their images are ingrained in popular culture--John Lennon cross-armed in his New York City t-shirt, the Doors standing in the window of the Morrison Hotel, and the Clash's guitar-smashing "London Calling" album cover--the names of the photographers who captured these images--Bob Gruen, Henry Diltz, and Pennie Smith--remain largely unknown.

Marshall is quoted extensively in the introductory text to Buckland's catalog, and his words seem, at times, to run counter with the curator's chief intent for the show: "When you see my pictures, it's about the person in the photograph, not me--not the guy behind the lens. I want someone to see those people, not my picture of them." But by all accounts, the legendary photographer's personality was almost as renowned as his product. Santelli describes the key to the legendary photographer's success: "He stood at the top of the heap of rock photographers, he had the attitude that pushed back, he bullied his way in and got what he knew he needed." Or, in the words of Ed Carey of Gallery 291: "He wasn't an observer, he participated. He couldn't have gotten those photos if he didn't."

Marshall's fearless approach to his photography was equaled by his extreme lifestyle. Fahey recalls, "He was edgy, no question... he redefined the word 'gruff.' But, as gruff as he could be he was equally kind-hearted and very giving." Marshall's assistant of 13 years, Amelia Davis, recalls feeling intimidated when she first began working with him and was first diagnosed with MS. "I was a little scared to reveal it to him," Davis says. His response was: "I don't give a shit... what the fuck is MS?" Marshall since became an active supporter for the cause. Davis, president of VisionWorks Foundation and MSFriends, says, "He had really seen how it affected me over the years, and become one of our biggest advocates." He also actively enlisted the support of other photographers to donate work to Davis' yearly fundraising event, Rock for MS (which will be held this year on July 24, at the Petersen Automotive Museum, in Los Angeles).

But it wasn't his personality that earned the trust and respect of his peers and subjects, it was his work. Kirk Anspach first met Marshall in '68, while working in a San Francisco photo lab, and within a few years began to print Marshall's work. The collaboration and friendship lasted well over 30 years. Anspach describes Marshall's ability to capture the essence of a moment: "Other people were at the same place, at the same time, but they didn't get the same shots." 
Marshall's ability to take advantage of a situation may be best summarized in the roots of his music photography career. In 1960, he attended a jazz workshop in San Francisco where he first met John Coltrane. At the session's conclusion, Marshall gave "Trane" a lift to Ralph Gleason's house in Berkeley, where the legendary musician agreed to allow the young photographer go to work. The rest, as they say, is history. "He got Miles because [Miles] saw those photos of John Coltrane," Davis remembers. Marshall had approached Miles backstage one night and gave him one of those photographs. Upon seeing the images, Miles called out, "Hey Jim... is this yours?" Jim: "Yes." Miles: "You took these?" Jim: "Yes." Miles responded, "Why don't you take pictures like that of me?" to which the up-and-coming photographer replied, "Why don't you let me?"

Another aspect that sets Marshall's photography apart is the level of intimacy his work evokes. Bordering on voyeuristic, Johnny Cash and June Carter Cash (1969) encapsulates the great love story of these two musicians in a single frame. June lays, eyes closed, with her head on Johnny's chest, who is seen in profile. There is no vanity here, just the lines of hard-lived life etched across the face of the original man in black. Another photo, simply titled Kris, depicts songwriter Kristofferson sitting on the edge of a bed in an empty hotel room appearing as if getting dressed. The second bed remains undisturbed. Void of the illusions of groupies, roadies and the like, what is left is simply the songwriter, the room and his cigarette. These are quiet moments. Instead of projected personas, Marshall captured quiet personalities. The resulting work transcends the implied boundaries of the term "rock photography."

Nor did Marshall limit his subject to that of musicians. With the visual acumen akin of Walker Evans or fellow Leica-aficionado Helen Levitt, Marshall also captured the lives of residents of rural Appalachia, the segregation of the South in the 1960s, and the despair following the news of Kennedy's assassination on the streets of New York. Photography historian Beaumont Newhall once described documentary photography as a method "to record without intrusion, to inform honestly, accurately, and above all, convincingly." Though decidedly different in subject, these works share a common thread with the better-known aspect of Marshall's career: they reveal his desire to go beyond the surface in search of the individual.

As with all pop culture, it may be easy to dismiss the impact of rock photography as superficial or commercial. But such an attitude fails to recognize the impact made by the artists on both sides of the lens. The images created by photographers such as Marshall not only reflect popular culture, they played key roles in shaping it. Looking back at his career, Marshall once remarked that he had been a historian, without even realizing it. Fellow photographer Chris Felver, who first met Marshall years ago through Anspach's studio, summarizes Marshall's contribution, "he's the guy who put a stamp on my generation. For me, he's a seminal photographer."